Fighting with one hand tied behind their back: Renewing SaskPower for a Renewable Regina (and a Sustainable Saskatchewan)

One of the key pillars for cities attempting to achieve 100 percent renewability is perhaps obvious—renewable power. Exemplary renewable cities like Portland, Oregon, and Austin, Texas, have met or exceeded their renewability goals in large part through the purchase of renewable power from a state utility and through the generation of renewable energy at the community level. For the City of Regina—which has pledged to become 100 percent renewable by 2050—emulating the success of these cities will be difficult. This is because the City currently relies on SaskPower for the vast majority of its power and any attempt by the City to generate its own power must be approved by the provincial crown. The problem is that SaskPower only aims to achieve “up to 50 percent” renewable energy production by 2030, making attempts by municipalities to purchase large amounts of certified renewable power difficult. Even more difficult are the obstacles currently in place for communities wishing to generate their own renewable sources of power:

“One of the bigger challenges to the City becoming more renewable is that SaskPower offers limited ability for its customers to produce electricity if customers still wish to connect to SaskPower’s electricity grid,” says a report written by city administration. “Without lobbying for SaskPower to change its policies, it would be extremely difficult for the City to generate its own renewable electricity,” it continued.

Indeed, the report notes that attempts to install a second landfill gas-to-energy system were rebuffed because SaskPower did not have adequate grid capacity in the area. Other city-sponsored renewable projects would appear to face similar hurdles. Working with Saskpower, the City of Regina could support major transformations to our provincial electrical grid and crown utility so that it can better serve the needs of municipalities as they transition to 100 percent renewable power. Indeed, reworking Saskpower’s operations and business model will be essential for the renewable city movement in Saskatchewan, so that municipalities like Regina can purchase and generate renewable power.

Currently, without the ability to purchase or generate our own renewable power, the City of Regina is effectively fighting with one hand tied behind its back. And while it can still reduce its own energy consumption and seek out efficiencies, it simply won’t be able to achieve the renewable targets that other municipalities are well on their way to meeting without the ability to generate its own renewable power. The irony here is that SaskPower is a provincial crown and therefore not constrained by the narrow short-term imperatives of profitability that can prevent private corporations from adopting ambitious environmental goals. As a publicly-owned and democratically-controlled utility, we can demand that SaskPower prioritize meeting the renewable energy needs of our municipalities. That our crown has been so slow to adapt to the energy needs of individuals and communities, despite being a publicly-owned utility, is because SaskPower still operates on a business model that is fast becoming anachronistic for all utilities—public or private. 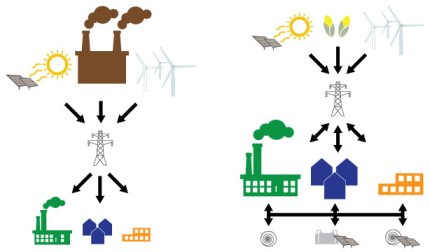 The vast majority of power utilities in North America continue to operate on the same business model as they have for almost one hundred years. This is a “centralized generation” model, where large, centralized power plants (coal, natural gas, nuclear, etc) transmit power over long distances through a grid to the end consumer. The primary source of revenue under this model is the sale of electricity to the customer based on established (usually flat) rates. This model is being fundamentally upended by the mass introduction of smaller-scale “distributed energy” technologies (like solar panels) that allow customers to generate their own energy supply that can be consumed on-site or sold back to the grid. These technologies are effectively transforming former “consumers” into “producers.” The fear of utility companies is that as distributed energy technologies become more widely adopted, they will effectively shrink their customer bases. As Bill McKibben writes:

“But many utilities see residential solar power as an existential threat. In 2013, an industry trade group called the Edison Electric Institute warned that utilities face what company executives were quick to call 'a death spiral.' As customers began to generate more of their own electricity from the solar panels on their roofs, utility revenues would begin to decline, and the remaining customers would have to pay more for the poles and wires that keep the grid alive. That would increase the incentive for the remaining customers to leave.”

This fear was evident in SaskPower’s decision to abruptly cancel the existing net-metering program—which has “decimated” the solar industry in the province—citing the cost of the program and its effect on ratepayers as the ultimate reason for its cancellation:

"If SaskPower just maintained the net metering program as-is and just let it keep on running until 2025, that alone would require a seven per cent rate increase for our rate-payers, which would be borne by the rate-payers who don't have solar panels on their homes," Joel Cherry, spokesperson for SaskPower, said.

While we can be sympathetic to SaskPower’s revenue concerns, attempting to delay the transition led by municipalities to distributed energy seems counterproductive. There has to be a way that SaskPower can satisfy its concerns with costs while also ensuring that communities and individuals can reap the benefits of clean and renewable power. It may very well be that power utilities will have to diversify their operations, so they can capitalize on the renewable power needs of their customers, while relying less directly on volume sales of electrical power. This is what Green Mountain Power in Vermont has done, providing customers with a host of energy-services. The Vermont utility has partnered with local contractors to offer complete home energy retrofits financed through customer utility bills. This allows customers who may not have been able to afford the upfront costs of solar panel installation, heat-pump conversion or battery storage to finance them directly through their utility bills. This has brought new revenue streams online for the utility, transforming it from a mere electricity provider to an energy services provider that is well-positioned to take full advantage of the transition to a more distributed energy system. Indeed, the utility now touts itself as an “energy transformation” company.

Other utilities have sought to adapt to the challenge of distributed generation by experimenting with rate redesign, that can capture the costs of the utility maintaining the grid, while also incentivizing individuals and communities to implement renewable power. Some U.S. utilities are experimenting with a “value of solar” (VOS) price as an alternative to net metering. This attempts to more accurately capture both the costs and benefits of distributed solar energy to the grid as a whole. Other utilities are adopting time-of-use rates, which attempt to price electricity based on the time of day the demand occurs, rather than a flat rate. What these efforts illustrate is that there are ways to resolve the cost concerns that electrical utilities face due to distributed generation while still incentivizing communities and individuals to adopt more renewable sources of power. Administering a more distributed grid will require investments in technology and innovation so that SaskPower can more accurately predict and manage the variability associated with renewable production and peak consumption. But these are challenges to which a new generation of engineers and technicians are eager to contribute.

Unfortunately, it seems right now that SaskPower has very little interest in facilitating smaller renewable energy projects at the community level. Its vision for the future appears to be the continued maintenance of a centralized system of power generation, albeit with larger renewable projects and quite possibly nuclear. This effectively leaves municipalities that want to lead on renewability on the sidelines, forced to wait for SaskPower to provide them with certified renewable power somewhere in the distant future. This will render a lot of the popular enthusiasm and promise at the municipal level for renewability effectively moot, as cities and their citizens take a back seat to SaskPower’s own timetable. While there are legitimate concerns that smaller renewable projects may not be as cost-effective as larger centralized energy production, there is a case to be made that pouring cold water on community-led renewability initiatives and squandering public enthusiasm could be equally costly in terms of public participation and buy-in to energy transition.

Should SaskPower remain recalcitrant on community and citizen-led power initiatives, it is not unreasonable to speculate that this intransigence will provide fuel for those that would very much like to see the provincial power utility privatized. We fear that rather than using our publicly-owned crown to facilitate the energy transition, opponents will point to the crown’s inflexibility and failure to innovate as justification for turning power production over to the private sector. While we are adamantly opposed to such an idea, given all the benefits a crown offers for achieving environmental and social goals over that of the private sector, we can nevertheless envision bad faith environmental arguments for the privatization of SaskPower if it continues to frustrate public desires for greater renewability and more aggressive climate targets.

It is a truism that electrical utilities are fundamentally conservative institutions, favouring safety and stability over risk and experimentation. While this may have been a virtue in the past, it is fast becoming a vice, as the need for aggressive climate action becomes all the more urgent. Asking such an institution to lead alone on a program of rapid energy transition may be misplaced. Thankfully, because it is a crown and under our democratic direction, we can give SaskPower the mandate to experiment, to prioritize environmental goals over that of profit, and to facilitate an environment where municipalities like the City of Regina that want to lead on renewable energy are empowered to lead. Equally important is that the City of Regina actively takes up this leadership role, using its power as one of the largest municipalities in the province to fight for the energy policies it needs. It cannot shy away from making a vocal and public case for a transformed public utility that can better meet the renewable energy needs of all municipalities in the province. By demonstrating this kind of leadership, the City of Regina could not only ensure us a Renewable Regina, but perhaps a more sustainable Saskatchewan as well.

Simon Enoch is Director of the Saskatchewan Office of the Canadian Centre for Policy Alternatives. He holds a PhD in Communication & Culture from York/Ryerson University.