EI is Not Actually Helping the Poor

Who does employment insurance help? It seems like an obvious question. One would assume that EI is for Canadians who’ve lost their jobs and are therefore going to be low income. EI is meant to support them through hard times as they hopefully get another job and get back on their feet.

But…. what if we look at what income quintile EI recipients formerly found themselves? Were they low-income, middle class, or rich before they got laid off? I did some digging and I was surprised by the result. 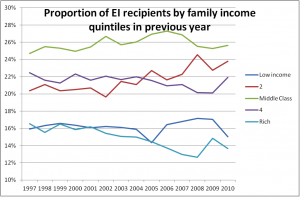 You might wonder “How could it be that the lowest income families are among the least likely to receive EI?” The answer is that the lower your income, the less likely you are to be able to surmount the 910 hours barrier to qualifying for EI in the first place. The more frequent bouts of unemployment experienced by low income Canadians paradoxically makes it harder for them to access the benefits that would help them while unemployed.

The other disturbing implication of the above results is that any group that represents less than 20% of the beneficiaries is in essence subsidizing the system. The lowest income group only receives around 16% of the benefits depending on the year. The poor pay into EI while working, but they are less likely to collect benefits if they’re laid off.

While we may consider EI a strong social support system, its current construction makes it particularly regressive for Canada’s lowest income families.

The easiest way to redress this inequality is to reduce the number of hours required to qualify for EI thereby letting in those with precarious employment resulting in more frequent bouts of EI. While many have been advocating this change, there seems to be little traction federally.

It’s unfortunate that due to data constraint I can’t go back prior to 1997 as that would have illustrated the substantial restriction in EI hours implemented in 1995.