Doing the math on the PC platform

One of the more controversial aspects of Ontario’s 2018 election campaign has been the complicated relationship between Ontario’s PC party, its new leader Doug Ford, and the party’s own election platform or— perhaps more accurately—platforms.

For much of the campaign, the only formal platform document the PCs had was one prepared and released under former leader Patrick Brown before his resignation in January.

While Mr. Ford made it clear that Mr. Brown’s platform was neither his platform nor the official platform of the PC party, no alternative platform appeared until the last Friday of the campaign, six days before the June 7 election.

All of the other parties—the Liberals, NDP, and Greens—released their fully costed platforms well before the writ dropped. While both Liberal and NDP platforms have had their share of criticism, they were fully costed and had their program estimates reviewed by Kevin Page. How does the PC platform fare, comparatively?

Advertised as a fully costed platform, what the PCs actually released amounted to a listing of the ad hoc campaign promises that had been made over the past few months with costs stated for most of those promises. But that list contains no comprehensive compilation of total platform costs, nor does it indicate how those promises would be funded.

What follows is an attempt to do the math on the PC party’s campaign promises.

The following table itemizes the financial impacts listed in the PC platform document for each promise to which a cost is attached. 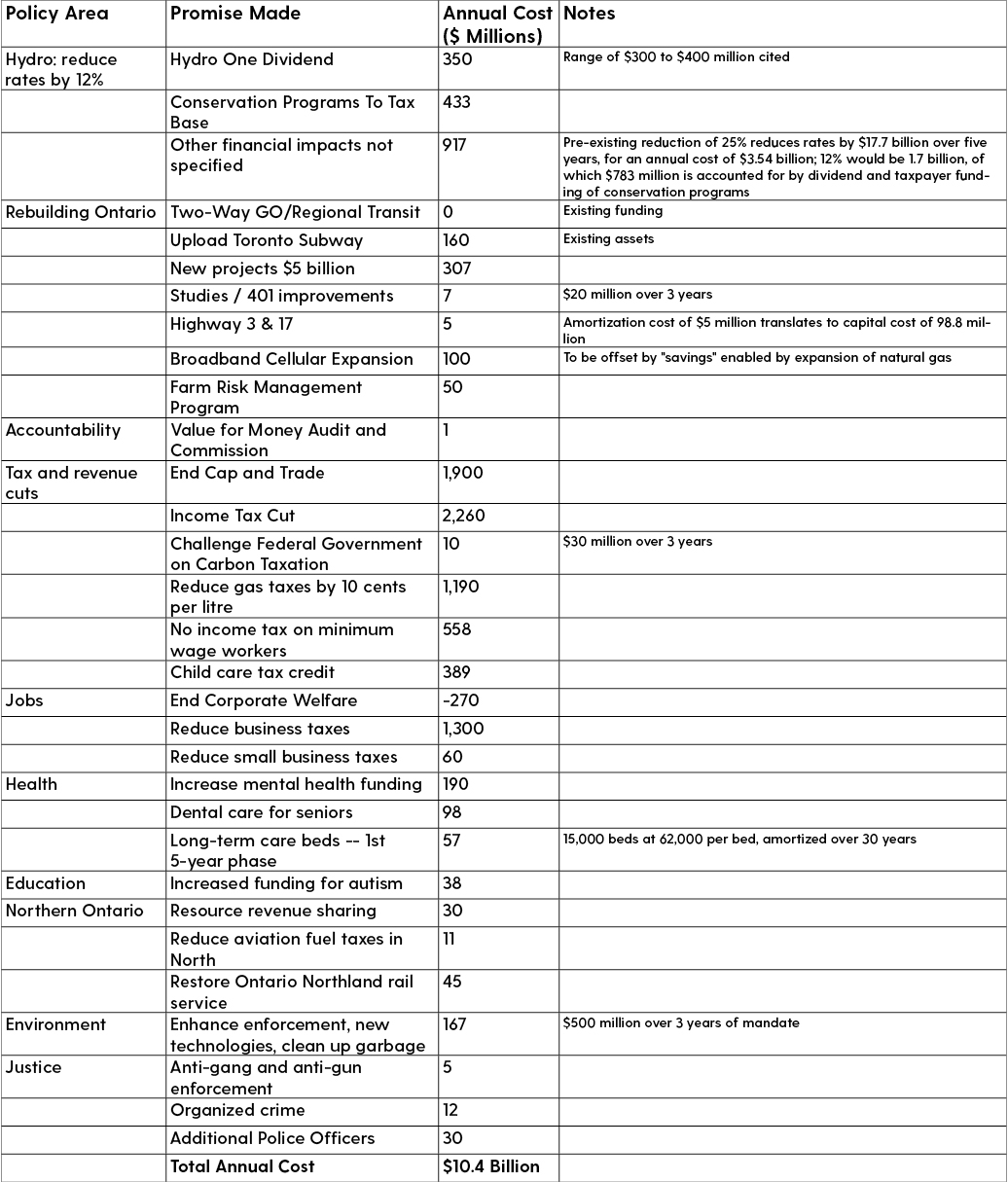 One of the challenges of estimating total costs is that they are not always stated in full. Some amounts are stated to cover the term of the mandate, which we assume would be spent over a three-year period. Some costs are stated as total amounts, along with a notation that the cost would be amortized over the life of the project. In other instances, amortized costs are cited, but not the total cost. And many of the cost estimates have been criticized because they are underestimated.

Based on the cost of the current 25 per cent hydro rate reduction cited in the Financial Accountability Office report on the Fair Hydro Plan of the Liberal government, a further 12 per cent reduction in rates would cost an estimated $1.7 billion, of which $783 million would be covered by the dividend and taxpayer transfer.

The PC’s $1.9 billion promise to cancel Ontario’s cap and trade program is cited as having no financial impact, but that’s not the case. Because that change would be indistinguishable from a program spending cut, the impact on fiscal capacity should be included in the total to reflect the revenue loss.

The only other issue relates to the cost of expanding broadband cellular service in rural areas. The platform states that the $100 million annual cost of broadband expansion will be covered by savings from expanding private sector natural gas service in rural areas. However, the platform does not explain the link between expanded natural gas service and government revenue to cover cellular broadband service.

My conclusion: the annual cost of the PC platform promises would be $10.4 billion during a first term in office.

However, that is not the end of the story. The platform also contains a promise to return to a balanced budget “on a reasonable time frame.”

Assuming that a reasonable time frame would be to cut the deficit in half in the next government’s first term in office, and using the lower baseline deficit figure, the PCs would need to find another $3.35 billion on top of whatever is required to offset its platform costs.

Add that to total cost and the PCs need to either cut spending or raise revenue by $13.75 billion annually.

To put that magnitude into perspective, Ontario’s total program spending on areas other than health and education is approximately $55 billion annually. The fiscal hole of $13.75 billion created by the PC platform is 25 per cent of that amount.

Author's Note: This analysis relies on the estimates provided by the PC party, but it should be noted that other analysts have found areas in which those numbers appear to be understated, thereby potentially deepening the fiscal hole.