The shaky economy seems to have prompted Canada’s CEOs to pontificate on what steps should be—nay, must be—taken to solve our economic woes as a nation. Case in point: on Monday, the Canadian Council of Chief Executives (CCCE) released a paper titled “Career ready: Towards a national strategy for the mobilization of Canadian potential.”

Canada’s workforce challenges, it explains, are profound. But the reason we have not met them is simple: too much education for too many young people in too many areas that do not have a direct application to the needs of the job market.

The solution? “Canada could dramatical improve the quality of university education by cutting enrolment as much as 25 to 30 per cent while maintaining budgets at roughly the same level. The young people who were not accepted would for the most part be those who are, in any event, unlikely to graduate. This selective approach would likely produce more graduates, or at least no fewer, who are better prepared for the world of work," explains author Ken Coates. (Emphasis added because let that sink in, people.)

So, less education targeted to fewer students. Because those who wouldn’t qualify for this more elite system of higher education would probably have, you know, "limited skills". Or at the very least be motivationally challenged. Right?

Opportunities to witness the unvarnished perspective of the corporate elite—particularly when it comes to the not-corporate non-elite—are generally rare. Which is why this report is so refreshingly honest. It even comes with a generous dose of tough-love: “The current generation of young people is defined by a sense of entitlement and an expectation that their lives will somehow unfold along a predetermined and positive trajectory.”

Let’s take a closer look at what the label of “entitlement” might mean (we say “might” because we note that the CCCE report is intriguingly reference-free).

Today’s “entitled” students pay $6,600 a year in tuition and other compulsory fees; by the time they graduate (2017-18), they will be paying $7,000 a year (all inflation adjusted). And that doesn’t include books, transportation, food or other living expenses.

The lowest paid of Canada’s top 100 CEOs got $4.1 million last year, while the average salary was $9.2 million (representing an average pay raise of 16% over the previous year).

Students who receive funding through the Canada Student Loans Program graduate with an average loan debt of $28,500, and the collective amount of student debt owed to the CSLP is estimated at over $16 billion.

Corporate Canada’s coffers are overflowing with $630 billion in cash (Q1 2014). This is enough to make college and universities free to for 17 years (annual university and college expenditures is $37 billion) 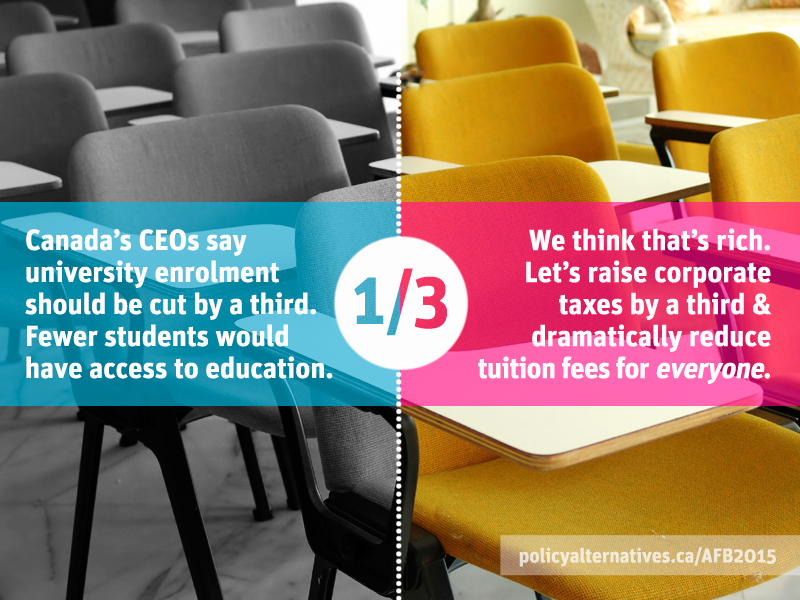 Here’s an idea for consideration (and it even comes with references!): Canada has the 9th lowest corporate tax rate of 189 countries, and the lowest of the G8. Rather than reducing university enrollment by 1/3rd, the Alternative Federal Budget recommends increasing Canada’s corporate tax rate by 1/3rd (from 15% to 22%). This would raise $6 billion a year (after the investment tax credit).

What to do with all that newly-liberated money? The AFB recommends reducing tuition fees to 1992 levels (which would be what a number of CEOs paid when they went to university); this would cost $2 billion annually.

Or, we could go further and eliminate tuition fees altogether at $3 billion a year.

Either option leaves plenty of room for Corporate Canada to reverse its steadily-declining investments in workforce training and R&D, a disturbing trend which is insufficiently acknowledged in the CEOs’ paper. Apparently it made more sense to repeat the tired refrain about “entitled” students, and call for a reduction in access to education instead. Because, as the author explains, “Canadian society will always tolerate and encourage considerable freedom of choice, but there can be too much of a good thing.”

In other words, a little entitlement is okay--so long as it comes with a CEO seal of approval.

This blog post was co-authored by Erika Shaker and David Macdonald.

David Macdonald is a Senior Economist with the CCPA and coordinator of the Alternative Federal Budget. You can follow David on Twitter @DavidMacCdn.