Defunding the police: What will it mean for survivors of sexual violence?

The recent killing of unarmed Black Americans George Floyd and Breonna Taylor by police officers sparked a new wave of Black Lives Matter protests around the world. In the seven short years since its inception, the Black Lives Matter movement has fought to protect Black lives against police brutality. This message has not always found a receptive audience. But in the wake of these recent deaths, and following a rapid succession of racist episodes ranging from Central Park Karen to the murder of Ahmaud Arbery, we reached a cultural tipping point and suddenly a seemingly unimpeachable subject was up for debate: police department budgets. 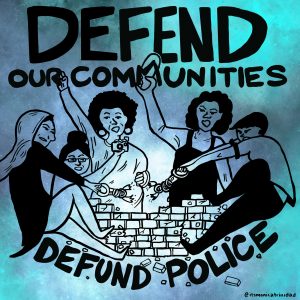 Defunding the police is a concept that would affect many communities in myriad ways. Some have asked what would police defunding mean for those experiencing, or who will experience, sexual violence.

In order to advance policy discussions about RCMP and police budgets, it is important to consider this: police are largely ineffective at responding to sexual violence and often exacerbate violence.

The assumption that police presence saves those who experience sexual violence contradicts the experiences of many survivors.

Sexual violence is experienced at high rates by those who are most marginalized. In Canada, Indigenous women report experiencing sexual assault at a rate triple that of non-Indigenous women.

If police intervention helped survivors of sexual violence, those benefits would be most realized by Indigenous people. The opposite here is true. A Human Rights Watch report surveying the relationship between RCMP and Indigenous women and girls in Northern B.C. documents disturbing assault allegations against officers, inappropriate strip searches, and other forms of racist and sexist abuse.

Despite evidence that police presence in Indigenous communities makes members less safe, the federal government relies on the RCMP, an organization failing to address sexual harassment among its own staff, to address widespread sexual violence experienced by Indigenous women. While Ottawa delays a promised National Action Plan for Missing and Murdered Indigenous Women and Girls, police departments across Canada are tasked with, and failing to deliver, a coordinated and effective response.

Other forms of inaction also constitute the failure of law enforcement to respond adequately to sexual violence. For instance, the link between domestic violence and mass shootings has long been documented, yet complaints of domestic violence are often dismissed by police. This particular issue was brought to public attention in May, when it became known that the Nova Scotia man responsible for killing 22 people in Canada’s worst mass shooting had been reported to the RCMP for physically assaulting his partner.

Dismissal of the type of violence most often faced by women and transgender people is by no means unique. In 2017, the Globe and Mail released its report, Unfounded, which found that one in every five sexual assault allegations is deemed unfounded by the police—meaning that an officer concludes that no crime has occurred.

Decreasing police reliance: reducing the demand To imagine sexual violence response with less reliance on police, consider why survivors who file reports do so.

In June 2016, the Ontario government instituted a pilot project that offers free legal advice over the phone to survivors. Keetha Mercer, manager of violence prevention programs at the Canadian Women's Foundation, said that women often use the service to ask about housing, employment, child care, and immigration needs.

Similarly, the Canadian Department of Justice conducted a survey of male survivors of sexual violence in order to understand their experiences with law enforcement. Although they often face different barriers and stigmas to reporting than women and transgender people, the report suggests that they are often trying to secure the same support through the police.

One of the men interviewed, who had made an official report, cited his need for therapy through victim’s compensation as the reason: “There’s some money to help you cope … help you deal with it and pay for your counseling and all that stuff. So that’s why I decided to report. I wouldn’t be able to afford to come to therapy if it wasn’t for that.”

These findings echo much of my own experience working at a sexual assault centre in Montreal. Although I worked for a service offering accompaniment to police stations, the work I found myself doing included gathering mental health resources for survivors, dealing with housing needs, ensuring they had food to eat, and explaining other processes—like university or union complaint procedures—that could hold perpetrators accountable without involving police.

The takeaway is this: much of what survivors want and deserve after an assault can be distributed or secured through other means.

Directing resources towards mental health initiatives is especially important for addressing police brutality. In a CBC investigation from 2000-18, it was found that the substantial majority of individuals killed by police were dealing with mental health or substance abuse issues.

A common argument for defunding police is that they are often called to respond to wellness checks and mental health interventions, something they are ill-equipped and untrained to do. The recent deaths of Regis Korchinksi-Paquet and Chantel Moore, less than two weeks apart, both happened while police were asked to check on the safety of these two women in distress.

Intervention and accountability without police Other reasons survivors decide to go forward with police reports include holding perpetrators to account and protecting others from being violated by the same person. These objectives can be and are pursued outside of police involvement.

Expanding and improving these forms of response also have the potential to afford survivors more agency and involvement throughout whichever process they move through. Unlike criminal complaints—which are brought forward by prosecutors, not survivors—individuals could have more say in their hopes, expectations, and fears about a process.

They also have the benefit of meeting the needs of survivors at a cultural level. For instance, restorative justice and community-based intervention methods have been useful in Indigenous communities. Recognizing that survivors will experience sexual violence differently and recover differently promotes multi-faceted approaches to healing and re-integration.

Bills in several provinces have mandated that universities implement stand-alone sexual violence policies. With these policies, survivors can make complaints to see that their abuser isn’t also on their campus or teaching them in class.

In my experience in Quebec, one of the provinces with this legislation, many adjustments still need to be made to improve these policies. This alone is a sign that they should have been developed years earlier. However, they offer the opportunity to address sexual violence at a level that more practically helps survivors.

Having a perpetrator of sexual violence expelled from class rather than thrown in jail isn’t a consolation prize, it’s a way to hold individuals accountable for their actions, to hold institutions accountable for fostering cultures that have too long brushed off rape culture, and to avoid victims’ experience of being traumatized by legal procedures.

Policy options Calls to reduce police budgets are calls to allocate funds elsewhere. The planned gross spending of the RCMP in the 2019-20 fiscal year is $5.1 billion dollars. Greater funding for sexual violence, housing, mental health, and Indigenous community services would not only help those who have been assaulted, it would reduce some of the marginalizing factors that leave many vulnerable to assault.

In Canada, victim compensation is a program in all provinces and territories except Newfoundland and Nunavut. It provides payment to survivors to secure some of these needs.

In six of the nine provinces and territories where it is available, filing a police report is an eligibility requirement survivors must meet to receive funds. Additionally, cooperation with police is required and taken into consideration when decisions about an amount of money are made.

To be eligible in Ontario, a report may be made to police or a sexual assault centre, domestic violence shelter, hospital, Indigenous social service, or other relevant community service. This model should be adopted by all provinces so that survivors are not reliant on law enforcement for security or redress after an assault.

Legislation promoting and equipping communities to implement survivor-centered policies for sexual violence on school campuses and workplaces offer more avenues for people after a violent incident and may offer better and more material outcomes when it comes to holding perpetrators accountable and protecting others.

Survivors want to hold perpetrators accountable, they want to heal and to be believed. They want many things that are better left to support services and social security without police involvement.

Heather Lawson is the McInturff Fellow at the Canadian Centre for Policy Alternatives. She is a graduate of McGill University where she supported and advocated for survivors of sexual violence at the Sexual Assault Centre of the McGill Students’ Society. Follow her on Twitter @heatherm_lawson.