December 6th: A day to honour lives lost and fight for a comprehensive national action plan against gender-based violence

In Canada we vow to end violence against women every December, to remember the massacre of 14 young women studying engineering at the Université de Montréal’s École Polytechnique. It’s a mission that won’t succeed, however, until we speak plainly and in the active voice about “violence against women.” Call it “intimate violence.” Call it “misogyny-fuelled terrorism.” Speak of it in the active voice.

“Only then can we address the unique forms of violence faced by women and girls, perpetrated by men.”

Anne Kingston wrote these words more than a year ago in one of her last articles for Maclean’s. And in the  year since the world has turned upside down with the arrival of the coronavirus. A pandemic of this scale was never a matter of if, as public health officials warned for years, it was a matter of when.

The predictable rise in levels of gender-based violence that has accompanied the pandemic is also no surprise. Public health orders to shelter in place have fuelled greater tension and strain in many families. At the same time it has increased the isolation of women with violent partners, separating them from the people who can best help them. We’ve seen this in other places, in other emergencies, and now we are seeing it in Canada.

“At first, it was very quiet, which was concerning because we knew there were women in the community who needed support,” said one respondent in Women’s Shelters Canada annual survey of shelters and transition houses. According to shelter workers, survivors were fearful of abusers monitoring their phones as well as their movements. And they were fearful of potential homelessness and the risk of contracting the virus—for themselves and their children.

Since the spring, however, both calls and requests for assistance have been rising steeply. Gender-based violence (GBV) staff and volunteers across the sector are documenting an increase in both the number and severity of reports of violence as well as the rising incidence of depression, anxiety and self-harm among victims trapped in abusive situations, including Indigenous women, those with precarious immigration status and women with disabilities.

Workers are worried that the innovations in service that they have introduced will simply not be enough to meet growing need. Shelters are already turning away families; overflow spaces have been mobilized but offer little to no long-term planning; victims are falling through the cracks. Workers themselves are experiencing greater stress and fatigue.

This all comes on the heels of several years of growing demand for service. The most recent data from Statistics Canada show that 80,000 women were victims of intimate partner violence (IPV) in 2019, representing another significant annual increase in the number of women reporting IPV to the police since 2014. Tens of thousands more incidents go unreported. Estimates of unreported sexual assault and criminal harassment are even higher. 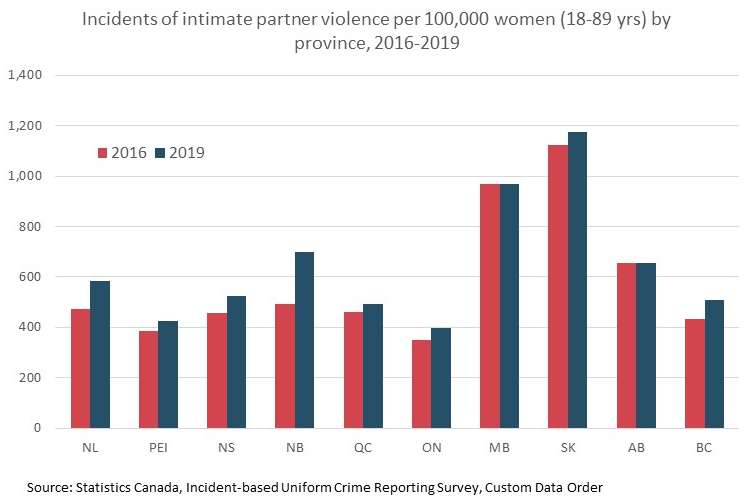 Government austerity agendas of the past three decades—fuelled by neoliberal ideology that privileges the “free market” over public health and community wellbeing—have left us wholly unprepared. Those groups and communities least able to shoulder the social and economic fallout of COVID-19 are now struggling under its weight.

Providing support for victims of violence should be seen as an essential public service—yet it’s not. Most shelters cobble together financial support from different governments and then have to fundraise the rest. Before the pandemic, one in five shelters (20%) hadn’t received a funding increase from their main government funder in more than 10 years. Over half (55%) couldn’t meet their operating expenses without fundraising and 10% couldn’t meet their operating expenses even with fundraising.

Not surprisingly, there are high rates of staff burnout due to low wages and poor benefits in the GBV service sector. And as a consequence, service providers have real problems finding and retaining qualified staff. Fully one-third (32%) of all shelter workers, for example, are casual or temporary staff, brought in to support around the clock service—this is twice the share of temporary workers in the whole labour force.

Long past time for action

Canada’s patchwork of services and programs serving those experiencing gender-based violence simply isn’t up to the task—a situation made immeasurably worse in the context of a global pandemic.

The federal government put up an initial investment of $50 million last March to assist shelters serving those fleeing violence and sexual assault centres to introduce new safety measures and service models. This fund was topped up by another $50 million in October, and this week, the federal government committed an additional $781.5 million over five years starting next year, and $106.3 million ongoing, to combat systemic discrimination against Indigenous peoples and to expand efforts to combat violence.

These funds provide much needed and very welcome support, but it is still not enough to meet overall demand for service and safe and affordable housing. Next steps must finally include a comprehensive, appropriately resourced national action plan on violence against women and gender-based violence—as called for by gender equality organizations—and the implementation of the Calls for Justice of the National Inquiry into Missing and Murdered Indigenous Women and Girls, which include a unique plan to address violence against Indigenous women, girls, and 2SLGBTQI+ people.

These plans need to be long term and embrace an “all-of-government” approach that incorporates prevention measures, policy and service responses, as well as legal and justice reform. They also need to be anchored in the leadership of VAW/GBV community and Indigenous women’s organizations and include meaningful accountability mechanisms for tracking and reporting on results.

It is long past time for action.