Cuts in Public Administration: A helpful avenue for development?

Quebec's government claims it has an economic strategy—cutting in the public sector and turning to extractivism. The scenario laid out for resource regions is particularly clear: to pave the way (quite literally!) for foreign mining companies so that they come to invest and to create jobs, or else to give out millions of dollars in tax credits to the forest industry (p. B.211). The government claims that this strategy will revive the economy in resource regions. Simultaneously, Finance Minister Martin Coiteux congratulated himself on cutting close to 500 public service jobs since January 1st, saying it will encourage investments. Unfortunately, in periods of economic stagnation, it's far from certain.

Graph 1: Direct, indirect, and induced impacts within the province of an exogenous shock of $1 divided by the GDP at basic prices 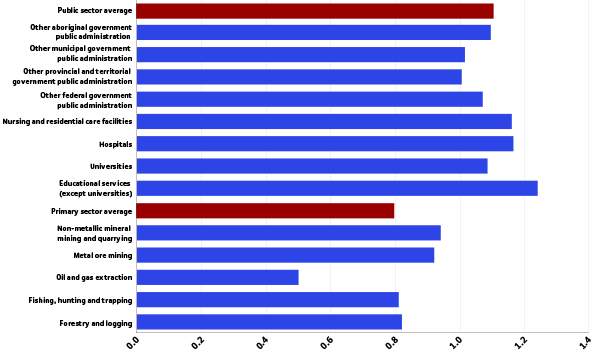 This is mainly due to the fact that expenses in the public sector are first and foremost wages spent in the local community. Hence, the salary of a public servant or teacher is more likely to remain within the jurisdiction than wages and capital expenses in the oil or mining sector.

As the following graph shows, the outcome is similar regarding job creation.

Graph 2: Leverage on direct, indirect and induced jobs created by $1 m. in production, by industry 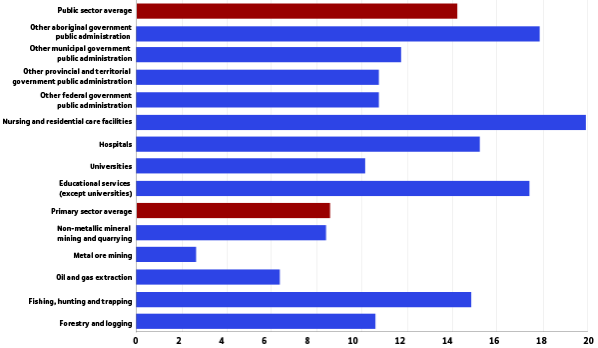 On average, every million-dollar investment in production creates 14.2 jobs in the public sector whereas in the primary sector the average comes up at around 8.6 jobs.

In short, the state's interventions in the economy should not be construed as expenses but rather as investments that have a structural impact on the economy, both in terms of employment and of wealth creation.

Does this mean that all investments —and the entire economy— should be run by the public sector?

Of course not! However, it seems clearer than ever that in this crisis period and economic stagnation, the private sector tends to adopt an over-saving strategy. In other words, it stops investing in the economy —be it through investments, dividends or taxes— to increase its savings to unprecedented levels. Hence, when the state lowers taxes for private businesses, it's both participating in private investments and depriving itself of revenue (more details here).

Furthermore, many resource regions' economies are often too concentrated around a single sector (mining, for instance) for which the number of regional jobs is determined by demand worldwide, as the graph below shows.

In the current situation, the state should play an active role in economic development by directly creating jobs rather than cutting in public service and regional development (local development centres and elected officials' regional conferences were cut). It would be much more effective than subsidizing companies that take part in the vicious circle of mono-industrialization. It's worth remembering that the proposed treatment was applied to manufacturing regions in the past and it shored up their regional economies as the manufacturing sector was plummeting because of the strength of the Canadian dollar. 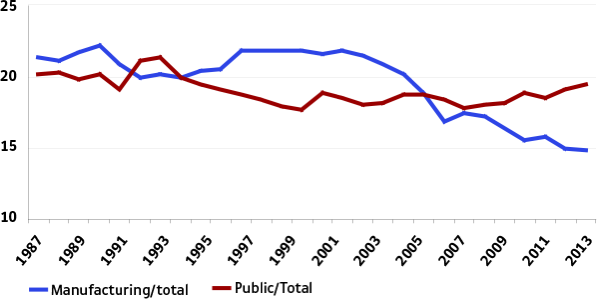 When the government prioritizes investments over public sector jobs, it tends to discriminate against resource regions. It would instead gain from implementing and playing an active role in a regional economic diversification strategy.

For more details, check out our most recent study on the subject.

This article was written by Bertrand Schepper, a researcher with IRIS—a Montreal-based progressive think tank.