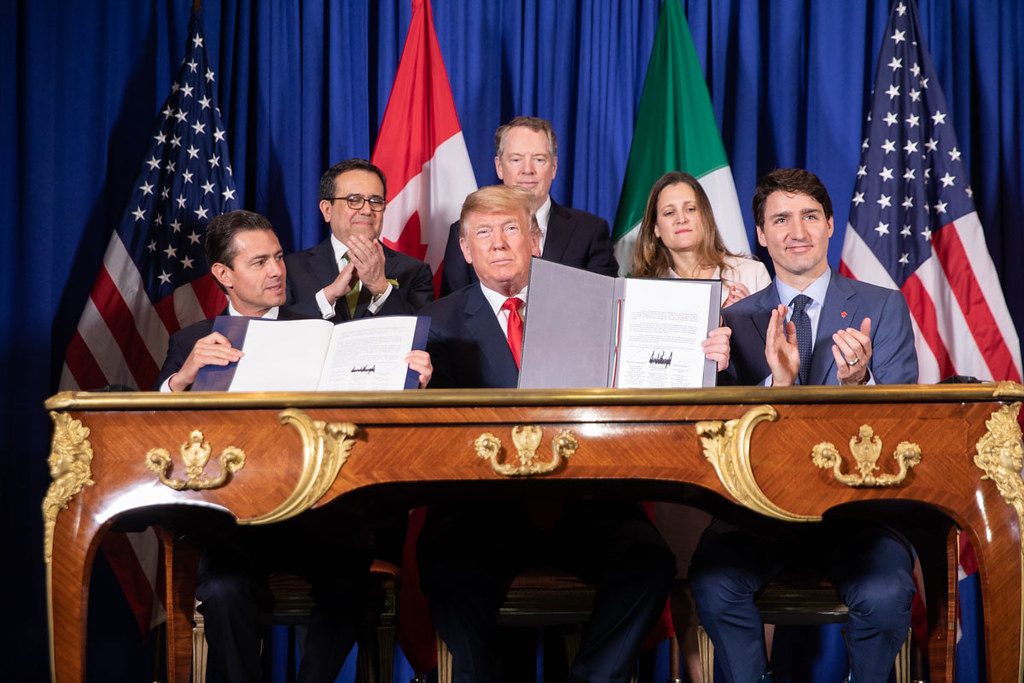 Regulation. It’s not something many of us have time to think about. Most people are busy working, keeping the household running smoothly and generally living their lives.

When we do think about how things are regulated, it’s usually after something terrible has happened: planes drop out of the sky, killing hundreds of people; a food product is recalled after making scores of people sick; trains carrying volatile oil derail and explode, killing dozens; flash pesticide runoffs wipe out all the fish in a local waterway; courts confirm that people are likely getting cancer from a popular pest management product; plastic is found clogging the innards of dead whales, or sitting at the deepest part of the ocean floor; etc.

In these moments, we recognize that our government watchdogs have slipped up, but likely still assume they have the desire and capacity to fix the problem by changing the rules for the better. But this isn’t always the case. Too often, governments today, including Canada’s, have strange and worrying priorities when it comes to how and when (or even if) to intervene to protect the public or the environment.

It’s not that our governments don’t care, it’s just that they spend much more time worrying about the impact of public interest regulation on commerce than they do about the impact of already too-lightly-regulated commerce on human health and the planet. Our governments think it is completely normal and logical to regulate with a primary focus on trade, “innovation” and corporate supply chain efficiency. They even have a comically Orwellian name for it, “Good Regulatory Practices.”

We should be alarmed by this trend in regulatory thinking. In particular, we should be asking why Canada is locking in these “good regulatory practices” through top-down cabinet directives that tie the hands of rank-and-file scientists and inspectors, and in binding free trade agreements like the Canada-U.S.-Mexico Agreement (CUSMA), Canada-EU Comprehensive Economic and Trade Agreement (CETA), EU-Japan Free Trade Agreement (JEFTA) and others.

Good for multinational corporations, bad for protecting the public

The long version of why we need to be suspicious of “good regulatory practices” (GRP) can be found in my new report, International Regulatory Co-operation and the Public Good, published this week by PowerShift (Germany) and the CCPA. The short version is that GRPs are actually “bad regulatory practices” that weaken the precautionary principle and are undermining our ability to set strong environmental, worker, public health and consumer protections.

The basic tenets of this (de)regulatory ideology include a preference for voluntary standards and industry self-regulation over central rules enforced by an accountable public body; requirements to adopt (and therefore to trust) the regulations of major trading partners before considering new domestic rules; and the use of time-consuming regulatory impact or risk assessments to determine whether the proposed rules are limited to achieving a specific task, are based on available science and are not overly burdensome to business—or whether it would be preferable for government to do nothing.

Canada is a global leader in the development of “good regulatory practices,” through the OECD and in WTO discussions about how to lower so-called technical barriers to trade, and their application in federal policy. It is also one of several pioneers in the use of cross-border working groups, like the Canada-U.S. Regulatory Co-operation Council (RCC) established by former prime minister Stephen Harper and former president Barack Obama in 2011, with the aim of developing compatible regulations that facilitate trade and get new products—new chemicals or new uses of existing chemicals, new GMOs, new medical devices and cosmetics, new plastics—onto the market as soon as possible.

As I describe in my report, these tables tend to be dominated by industry and corporate lobbyists, with only token representation from environmental, consumer and other civil society groups. And while some RCC decisions have led to benign or positive upward harmonization (to higher standards), such as Canada’s decision to adopt stricter U.S. energy efficiency rules for consumer electronics, in many other areas regulatory co-operation has had harmful results.

For example, according to Canada’s former transport minister Lisa Raitt, responding to a parliamentary study of rail safety after the deadly 2013 Lac-Mégantic disaster, alignment with U.S. rail standards and procedures happens “with a focus on international trade and commodity movement.”  She added that the results of RCC discussions “have and will inform decision­making on subjects such as tank cars and classification,” and that “it is vital that both countries continue to co-ordinate regulatory and policy actions to the greatest degree possible.”

While some progress was made to re-regulate the rail transportation sector under the Obama administration—by requiring two-person crews and electronically controlled pneumatic (ECP) braking systems on all trains carrying high-hazard liquids, for example—the current U.S. administration is rolling back these reforms. In the case of ECP brakes, which could have stopped the Lac-Mégantic derailment had they been in place, the Trump administration has cited a badly miscalculated cost–benefit analysis (a cornerstone of “good regulatory practices”) as justification for not burdening the rail industry with new rules.

As Bruce Campbell, author of The Lac-Mégantic Rail Disaster: Public Betrayal, Justice Denied, told me while I was researching my report, Canadian regulators continue to hide behind pressure to align with the U.S. as an excuse for not moving more forcefully to remove faulty rail cars, insisting on the highest standards for all present and future shipments of volatile goods, and setting a higher standard of labour protections that might have raised poor North American working conditions to levels where they would truly help us avoid such disasters.

The same dynamics were there for all to see in Canada’s late reaction to the two recent crashes or Boeing aircraft (we didn’t ground the planes until Trump did). Canada and the U.S. have also launched a “tested once” project under the RCC for cosmetics—one of the most poorly regulated consumer products in the U.S. Our labelling regime for hazardous goods in transit is also in the course of being weakened, despite the risks to workers in the warehousing, manufacturing and transportation sectors, for the sake of creating a harmonized North American system.

The downward pressure on public protections runs both ways, according to Sharon Treat of the Institute for Agriculture and Trade Policy (IATP), who notes that in the U.S., “corporate lobbyists aren’t waiting for ratification of the New NAFTA to attempt to use its regulatory co-operation provisions to eliminate port of entry inspections of imported meat, prevent hazard labeling of explosive grain dust or weaken controls of ozone-depleting gasses that contribute to climate change.”

At a December 2018 RCC stakeholder event in Washington, D.C., Mick Mulvaney, director of the U.S. Office of Management and Budget, praised the potential of Canada-U.S. regulatory cooperation to enhance the “deregulatory efforts” of the current U.S. administration. At a similar stakeholder meeting I attended in Ottawa a year earlier, Canadian officials suggested the Trump administration’s deregulatory agenda was an opportunity to renew interest in Washington for cooperation under the RCC.

U.S. Vice-President Mike Pence is in Ottawa next week to talk to Prime Minister Justin Trudeau about the new NAFTA, or CUSMA. With the steel and aluminum tariff war behind us, Pence would like Canada and Mexico to ratify the deal as soon as possible. On the weekend, he asked Congress to help the Trump administration approve NAFTA’s replacement by the end of the summer.

For the Trudeau government, ratification is simple enough. Implementing legislation for CUSMA could be tabled at any time, which might get the deal over the finish line before Parliament rises for the summer. That will depend, to some extent, on how seriously opposition parties want to challenge the government on the final package. I think there is a lot to challenge in the deal’s “Good Regulatory Practices” chapter.

“A potential problem with regulatory co-operation and ‘good regulatory practices’ in trade agreements is that their effects are likely to be subtle, affecting the behind the scenes regulatory process rather than making headlines,” says Dr. Gabriel Siles-Brügge, policy advisor to the European Public Health Alliance (EPHA). “They can strengthen the hands of those who wish to ‘cut red tape’ for businesses, which can come at the expense of public interest regulation, including in the area of public health.”

Monique Goyens, director general of Europe’s largest consumer advocacy network, BEUC, believes this is a pretty good reason why “[a] trade agreement is not the appropriate tool to define how our decision-making processes such as impact assessments or legislative reviews should be conducted.”

Trade deals routinely limit how we regulate in specific areas, as NAFTA did for energy, telecommunications, services, finance, foreign investment, etc. In fact, they include far more rules on how governments make policy and regulations than they do on trade and tariffs. The CUSMA goes even further by committing Canada, the U.S. and Mexico to regulate, in all situations, in a very specific, pro-business and non-precautionary way. Stray from the “good regulatory practices” outlined in the deal and you can be taken to a trade tribunal.

That CUSMA does this in the midst of a climate emergency, public demands to remove toxic chemicals from our food and consumer goods, planes literally falling from the sky as a result of sketchy industry self-regulation, and increasing proof that widely-used pesticides cause cancer and harm vital pollinators defies common sense.

Stuart Trew is a trade researcher with the Canadian Centre for Policy Alternatives and the senior editor of the CCPA’s bimonthly journal, The Monitor. His new report, International Regulatory Cooperation and the Public Good: How "good regulatory practices" in trade agreements erode protections for the environment, public health, workers and consumers, can be found at www.policyalternatives.ca.