(Hat tip to Toby Sanger, from whom I’ve borrowed much of this material.)

It is now generally well recognized that Canadian household debt has reached unsustainable levels.  Mark Carney, Governor of the Bank of Canada, has cited household debt as the most pressing domestic economic issue.

Canadian households now have a ratio of over 150% household debt to disposable income, that wasn’t always the case. In fact, in 1990, the ratio was only 90% for households. It wasn’t until the 2000s that Canadian personal debt really ballooned, coinciding with the explosion in housing prices. Most of the debt that Canadians carry is mortgage debt, which is closely tied to the real estate market. A portion of the strong economic growth that Canada experienced during the 2000s can be attributed to consumer spending—Canadians took on more and more debt to fuel growth. 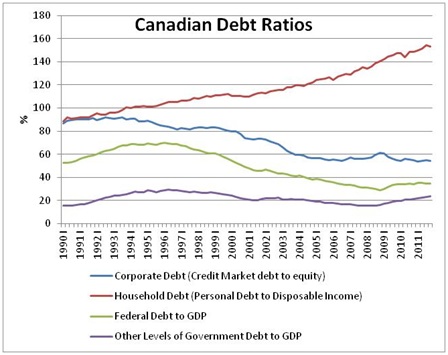 The Bank of Canada and other economists are right to point to rising household debt as unsustainable but the other side of this story is rarely told. While it's true that households have been taking on a concerning amount of debt, since the 1990s corporate Canada has been doing exactly the opposite. If households have become dangerously over-leveraged, businesses (and the federal government) have become dangerously under-leveraged.

Households and businesses had about the same debt-to-income ratio in 1990, at 90%.  By the mid-1990s, those ratios start to diverge as corporate Canada rapidly paid down debt—until 2005, at which point their ratio levels-off. Meanwhile, the federal government peaked in the mid-1990s, and then its debt ratio droped until 2009 when the recession required a small increase. However, the long term trend continued downward.

Provincial and municipal governments have been up and down over this period, but their debt ratio has been much more stable than the other groups.

The flip side of corporate Canada’s declining debt ratio is that it is being driven, to some degree, by the ever expanding cash holdings of Canadian corporations. The cash hoarding has continued throughout the 1990s, and although it saw a hiccup during the 2008-09 recession, it recovered rapidly and jumped to over $500 billion dollars last year. This cash hoarding has no doubt been driven by a halving of corporate tax rates between 2000 and 2012. It is worth noting that throughout the 2000s, in good times and in bad, corporate Canada continued to amass cash.

From a national perspective, having such large cash holdings sitting idle is an incredible waste of resources, particularly when economic growth is projected to be so tepid in the coming years. 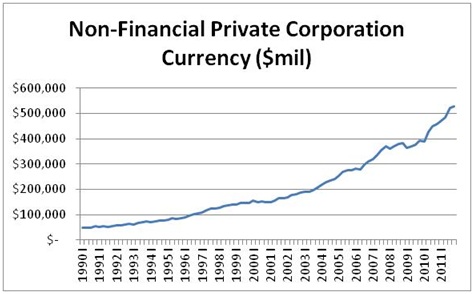 So what’s wrong with governments and businesses having no debt? It's certainly preferable for households to have no debt, so shouldn't the same should be true of governments? While this reasoning is often used, it can be quite dangerous from an economic perspective.

Both governments and businesses should be able to make more money, in taxes and profits respectively, if they invest properly. For instance, a company can make a smart bet on a new product by paying for a new factory with a bank loan. When that product does well, the company makes more money and their debt ratio declines, even if the absolute amount of debt does not. Of course, none of this is possible without the initial debt.

Governments can have the same benefits if they invest intelligently in infrastructure or new social programs that allow more Canadians to work and pay taxes. While debt might initially go up, increased tax revenues from stronger economic growth will drive down the debt ratio, particularly if it is cheap to borrow.

Unfortunately for households, debt is almost always used to purchase consumables (like cars and TVs) or non-investment real estate (like a house to live in). Higher household debt in that sense is not an investment in future growth and productivity.

The Canadian economy cannot grow any further by loading more debt onto households. The federal government and corporate Canada are dangerously under-leveraged. Ironically, that makes them ideally placed to step up and drive economic growth. Unfortunately, with stagnant economic growth projected for the coming years, corporate Canada is likely to continue sitting on the sidelines waiting for better times. The federal government for its part seems hell-bent on driving the federal debt ratio still lower in the years to come.

So, who's going to invest in the Canadian economy?