Congratulations to an Editor for the ages 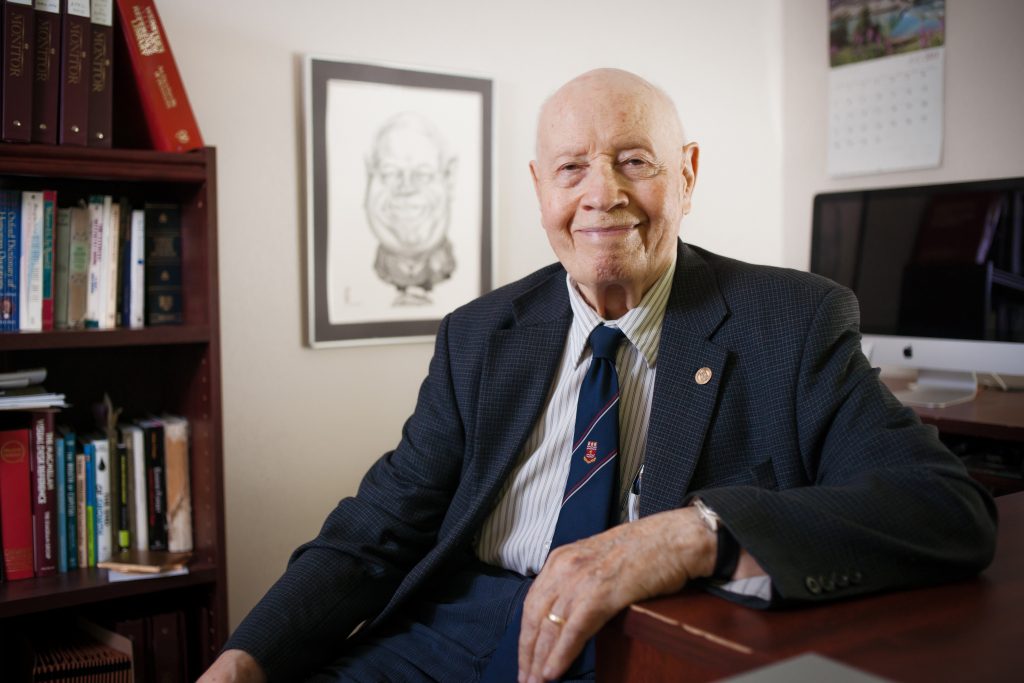 Ed Finn was a supporter and board member of the Canadian Centre for Policy Alternatives since its earliest days in the ‘80s. But in 1994, he became the editor of a publication intended to communicate with the CCPA’s 196 individual supporters and attract new ones (narrator’s voice: It worked brilliantly).

With his wealth of experience as a journalist, trade unionist, and progressive thought leader, Ed was the perfect choice for this role. And for 20 years, until his second retirement in 2014, he edited our flagship publication, the CCPA Monitor, which remains central to the work we do.

In addition to a brilliant editor, remarkably speedy two-finger typist, and eloquent writer, in his earlier years Ed was also a politician. He entered political life in Newfoundland and Labrador during the 1950s as leader of the Newfoundland Democratic Party, the precursor to the NDP, fighting against Liberal leader Joey Smallwood’s attacks on unions.

During the landmark Newfoundland loggers strike in the late 1950s, as editor of the Western Star in Corner Brook, Ed defied the owners’ directive to stop including the union’s perspective in its coverage, and resigned along with his editorial team. Ed was later a journalist with the Montreal Gazette, and subsequently a columnist with the Toronto Star.

He worked alongside Tommy Douglas in the fight for medicare, embracing Douglas’s clarion call: "Courage, my friends, it is not too late to build a better world."

Ed was a long-time union activist for labour rights and autonomy for Canadian unions. He was a staff member of several unions including the Canadian Labour Congress, the Canadian Union of Public Employees, and the Canadian Brotherhood of Railway Transport and General Workers. He was also the labour-designated board member of the Bank of Canada, where he railed against monetary austerity.

To CCPA staff he was also a shop steward, adviser, brilliant pun-maker, and surrogate Santa letter writer (as some of us parents can attest). He was also a fantastic storyteller with a remarkable wealth of content, including reminiscences about his mother, who as a telegraph operator in Newfoundland relayed the Titanic’s distress call. Or the time, while on a flight, he inadvertently noticed his personal CSIS file on the tray of the agent seated behind him.

Ed saw the Canadian welfare state grow in postwar Canada--out of the struggles of the 30’s. He was a harsh and insightful critic of the neoliberal assault of the last three decades. And he is a constant reminder that social justice is always a cause worth fighting for, and that we can do it with grace, humour, determination, and compassion.

We are so thrilled that Ed’s contributions to the labour movement and civil society are being recognized with his appointment to the Order of Canada. And we, as former staff and colleagues, are so privileged to have had the honour of working alongside and learning from him.

Congratulations, Ed, and much love to you and your family.

Erika Shaker is the Director of the National Office of the CCPA, and a former co-shop steward with Ed Finn. She's on Twitter at @Erikashaker.

Bruce Campbell is the former Executive Director of the Canadian Centre for Policy Alternatives.