Climate policy report card: how does your province measure up? 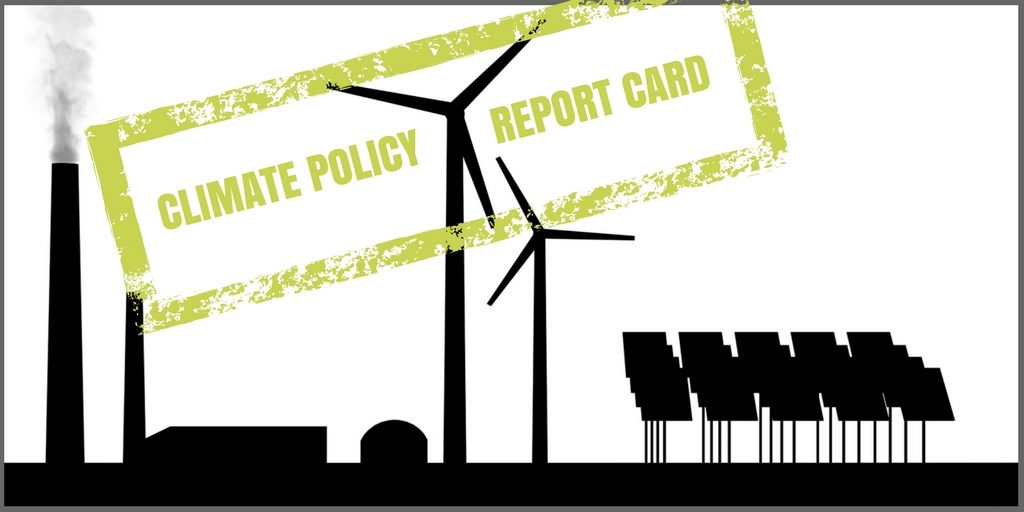 While governments in Canada are increasingly taking climate issues seriously, efforts to mitigate and adapt to climate change in Canada remain all over the map.

Some governments are taking meaningful steps to reduce greenhouse gas emissions (GHGs) and build low-carbon economies, while others double down on environmentally-destructive resource extraction and fossil fuel dependence.

So who are the leaders and who are the laggards in this classroom of climate policymakers? Who can we learn from and who needs a little remedial education?

The A students: global leaders

None! Canadian governments have come a long way in the past few years when it comes to recognizing and acting on climate change, but our provinces still have a long way to go to earn that gold star A grade.

On a per capita basis, Canadians are among the world leaders in fossil fuel consumption and greenhouse gas emissions. And that applies in every province. We need to drastically reduce the extraction and consumption of fossil fuels across Canada if we’re going to have any chance of reaching our 2015 Paris Agreement aspirations.

GHG emissions by year federally, via the Tracking progress report.

The B students: active learners

Nova Scotia is the only province on track to meet its greenhouse gas emission reduction targets for 2020 and 2030. The ongoing transition to renewable energy has significantly reduced emissions from the electricity sector.

Quebec has the cleanest electricity grid in the country and is a net exporter of renewable energy. The province has also been pricing carbon emissions since 2007 and implemented a cap-and-trade system in 2013. Per capita GHG emissions in Quebec are half the Canadian average.

Ontario is a vocal defender of climate action and a leader in climate policy experimentation. Some of those policies have gone badly, but the phase-out of coal-fired electricity generation was a success and the new cap-and-trade system for pricing carbon emissions is off to a good start.

New Brunswick has reduced its total GHG emissions by 38% since 2001 thanks to an aggressive shift toward non-emitting electricity generation.

Prince Edward Island is a leader in wind power research and development. The province already gets a quarter of its power from domestic wind farms and is working to expand capacity.

British Columbia was once the golden child of Canadian climate policy. The province implemented a ground-breaking carbon tax in 2008, which complemented existing investments into renewable energy and energy efficiency. Unfortunately, in the past few years BC has not only failed to increase the ambition of its climate policies, but has also endorsed the expansion of liquid natural gas facilities and other fossil fuel projects that threaten to undo prior emission reductions.

Manitoba has long been an advocate of climate action. The province has published numerous climate plans and was the first province to legislate a GHG emission reduction target. Those plans and policies have been put on standby and the province is on track to miss its future targets by a wide margin. Manitoba was also one of just two provinces that refused to sign on to the pan-Canadian climate framework.

The D students: do not meet expectations

Alberta alone accounts for 38% of Canada’s greenhouse gas emissions. Per capita emissions in the province are three times the Canadian average and a staggering 13 times the global average. Despite a relatively ambitious new climate plan, which includes limits on oil sands emissions, Alberta is not on track to reduce its total emissions moving forward. The continued expansion of the province’s oil and gas industry makes meeting Canada’s national climate targets essentially impossible.

Newfoundland and Labrador has some of the least ambitious climate policies in the country, in spite of—or perhaps because of—its sizeable oil and gas industry. The province has no real plan for transitioning to a low carbon economy.

The F students: absent from class

Saskatchewan is acting out—and may even be the class clown—when it comes to climate change. Alone among the provinces, Saskatchewan has no comprehensive climate strategy or emission reduction targets, and it was one of just two provinces that declined to join the pan-Canadian climate framework. Rather than take action itself, Saskatchewan has been the most vocal critic of the federal government’s climate policies. Meanwhile, Saskatchewan has the highest per capita emissions in the country and one of the deepest dependencies on fossil fuel extraction and consumption.

Updating the curriculum for a 2ºC future

There’s a lot to get excited about in provincial climate policy, but overall progress is too slow for Canada to contribute its fair share to global climate change mitigation efforts. Limiting global warming to 2ºC or even 1.5ºC above pre-industrial levels—as Canada has committed to—will require much more ambitious policies than are currently in place anywhere in the country.

My new report has some suggestions for the provincial and federal governments, including a moratorium on new fossil fuel infrastructure and the accelerated electrification of the transportation system. It’s not too late to put Canada on a path to a low-carbon economy.

But that will only happen if Canadian governments are willing to make climate change a top priority. Showing up for class is one thing, but making a positive impact is something else altogether.