Federal Natural Resource minister Joe Oliver stopped by Montréal on 11 April to promote tar sands and closed the door to any strict greenhouse-gas ceiling. He claimed that, according to scientists, our fears regarding climate change are “exaggerated.” He refused to retract his statement the following week before the federal natural resources committee.

His declaration could not be any further away from the truth. Even though the most recent data reveals that global warming has slowed down slightly since 2005, greenhouse gas emission trends point towards a catastrophic runaway climate change. Still, Canada continues to skate away from history and blindly attempts to expand tar sands, despite the fact that a grave planetary crisis is imminent.

So global warming is slowing down?

What exactly is the latest data on climate change telling us? Essentially, that if the concentration of carbon dioxide in the atmosphere hits 560 parts-per-million by the year 2050 (double the pre-industrial CO2 level), the global increase in temperature could be slightly below the 3 degrees Celsius which the Intergovernmental Panel on Climate Change (IPCC) projected in 2007. In other words, the planet could be slightly less sensitive to greenhouse gas emissions than we first thought.

Does this means that all efforts regarding the environmental conversion of the economy are rendered useless? Not at all. Special attention must be paid to the confidence intervals. Indeed, the upper confidence bound systematically exceeds the current consensual target for temperature increase set at 2° Celsius. Consequently, any carbon concentration target set at 560 ppm involves a risk of actually missing the temperature target and incurring the devastating consequences.

As American environmentalist Bill McKibben noted in his 2012 Rolling Stone article, many scientists consider the target agreed upon —limiting the temperature increase to 2° Celsius— to be insufficient to avoid a runaway climate change. The ultimate consequences of such a scenario remain impossible to predict.

Amongst the scientists McKibben cites, former chief biodiversity adviser to the President of the World Bank Thomas E. Lovejoy remarks that “[i]f we’re seeing what we’re seeing today at 0.8 degrees Celsius, two degrees is simply too much”. NASA climatologist James E. Hansen, who recently left his job to dedicate himself entirely to activism, shares Lovejoy’s conclusion: “The target that has been talked about in international negotiations for 2 degrees of warming is actually a prescription for long-term disaster”.

An additional reason to be cautious when interpreting the studies presented above is that none of them takes into account the 1,700 gigatonnes of carbon currently trapped in the Arctic permafrost which could be released if there was a 2-degree increase in temperature. That’s half of all the carbon currently in the atmosphere.

Such a rapid increase in greenhouse gas emissions could throw the planet into a warming spiral “devastating to the majority of ecosystems” and which “has a high probability of not being stable”, according to Professor Kevin Anderson, former director of the Tyndall Energy Program, the United Kingdom’s main climate research institute.

Ever more frequent and intense hurricanes, island countries disappearing, millions of climate refugees forced to be relocalized, droughts and famines in sub-Saharan Africa: these are only a few of the most disturbing features of the new inhospitable planet future generations could inherit. Additional expected effects include new out-of-proportion spring floods as well as the proliferation of out-of-control forest fires.

Flirting with a 2-degree warming therefore opens up the door to a very sorry future, which could quite simply be “incompatible with an organized global community” and “beyond ‘adaptation’” according to Anderson.

Emission pathways completely off the mark

How can we get out of this mess? If we were to manage to limit carbon concentration at 560 ppm by 2050 (which still means we could miss the 2-degree target), we would need to have reduced global greenhouse gas emissions by at least 60% of 2000 emissions. However, current emissions keep on increasing, potentially by a rate of about 3% per year. 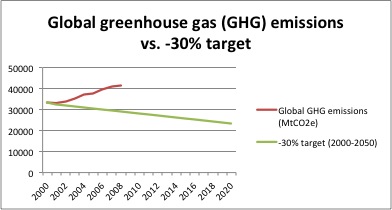 The threats related to climate change are thus far from “exaggerated”. On the contrary, an unprecedented societal shift is urgently needed.

Sadly, neither Minister Joe Oliver’s remarks nor Québec Premier Pauline Marois’s openness to seeing a new pipeline being built —which could accelerate even more the expansion of tar sands, the second most important carbon store on Earth— bode well for any turnaround whatsoever.

This article was written by Renaud Gignac, a researcher with IRIS—a Montreal-based progressive think tank.