Change gear: The VW scandal and the failure of deregulation, self-regulation

VW's house of lies about dirty emissions from "clean" diesel cars isn't a scandal as much as a syndrome, fallout from a belief that less government, more market will produce the best results. But "self-regulation" is producing worse results over time; and the "fix" that governments are coming up with is moving us in the wrong direction.

The reveal this week that VW has been lying for years about just how clean its diesel technology is came as a shock. While this was not a case of engineered product failure, it was a calculated strategy, designed to say one thing and do another. Many people felt snookered, yet in some ways this is a story that we have co-written, as society has changed its rules and expectations of how businesses behave via the laws and regulations crafted by our elected representatives.

At its heart, the VW story is another case of fallout from the faith in markets to self-correct, and the consequent shift towards de-regulation and "self-regulation". This so-called smarter regulation has been a policy trend in Canada and US since the 1990s, building on a sentiment carefully groomed among politicians by lobbyists: "for best results, don't get in the way of business." 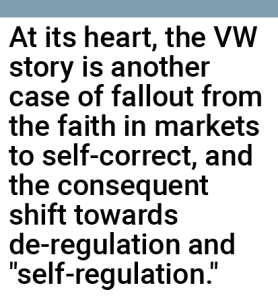 We have seen a growing number of terrible results over time. Since 2014 alone, these include several stories in the auto sector (Toyota's sticky gas pedals, GM's faulty ignition switch, Takata's exploding airbags in millions of models of cars); but also massive meat recalls, listeria outbreaks, and—most spectacularly—the rail crash at Lac Megantic. Simply put, these are all examples of disasters stemming from cutting corners, because meeting regulations would increase costs and bite into profitability

The VW story is a gold-medal example of how the system works...or, rather, fails to work. Governments set a goal to benefit all citizens (in this case, pollution control), introducing widely-supported regulations to achieve that goal, then ask the corporations to police themselves when it comes to ensuring that regulations are met. It's like giving the fox the key to the henhouse and asking them to make sure the chickens are fed and healthy.

The proper role of the government in regulating the private sector is to set out the rules of the game, and ensure that those standards benefit everyone, protect health or meet other fundamental societal goals (such as controlling air pollution, ensuring food safety or fair treatment of workers). Then, critically, the government's role is to enforce those regulations, through systematic or spot inspection of producers, or both, rather than simply rely on a consumer-driven, complaints-driven process.

But didn't that system work with VW? Ultimately, yes. But none of the steps of the formal enforcement process would have taken place if not triggered by the work of an independent research group that was looking to prove that the diesel cars sold in the US performed better than those sold elsewhere because of tougher standards. (They were testing the size of discrepancies between a company's stated performance and actual "real-life" conditions, because companies test under ideal conditions.) It was on discovering that the stated nitrogen oxide emission rates were up to 35 times higher than the stated rates, far exceeding the legislated standards for this major air pollutant, that EPA followed up.

And that was not a unique event either. VW knowingly lied for years when said they were compliant with laws. When EPA called the company on its "problem" in May 2014 and demanded a fix, VW came back with no fix and said they'd fixed it. Only then did EPA suggest that the whole 2016 line could be banned from the US market, which led to a cascade of apologies...and no tech fix.

This is not unique to VW, or to the US. The same problem is multiplying in Canada as we reduce the number of rail safety inspectors, food safety inspectors, and tax auditors. Corporations are increasingly bending the rules, sometimes breaking them and waiting to be caught, to make a buck in this cut-throat slow-growth environment, where small players get squeezed by bigger players and big players are rewriting the rules of the game.

Rather than counteracting this trend by enacting tougher laws and enforcement, the direction of change is increasingly bold. Recently, a German member of the European Parliament proposed exempting tests on a whole class of vehicles. Surprise: It was later discovered the proposal originated with Volkswagen group. Behind the scenes, major businesses and industry groups are also driving proposals on how to craft trade deals.

The trend is towards asking industries to monitor themselves (at their own suggestion), which they quite happily will do, and tell you what they think you want to know.

Now there is a role for self-regulation. Most adults practice self-regulation to some degree. But when we pass laws against certain types of behavior, we don't think people should police themselves. We hire police to ensure that the laws are obeyed.

Corporations' sole purpose is to make money. That motive doesn't make them more trustworthy than individuals.

If the VW story isn't a huge wake-up call about the failure of corporate self-regulation, I don't know what is. We need good rules, well enforced. Without good enforcement, good rules are just a charade of fairness.

This is a version of Armine's column for CBC Radio's Metro Morning from September 23, 2015. Armine provides business commentary every Wednesday and Friday. You can listen live at 6:40 a.m. EST or check out the web page for the podcast by mid-morning. You can follow Armine on twitter @ArmineYalnizyan.