CETA: Why the big rush to ratify? 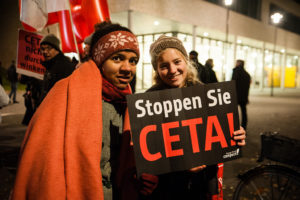 After spending all year consulting with Canadians on the pros and cons of the Trans-Pacific Partnership trade agreement (TPP), the Trudeau government is close to ratifying an equally controversial, equally intrusive deal with Europe: the Comprehensive Economic and Trade Agreement (CETA).

Like the TPP, CETA was negotiated almost entirely by the previous Conservative government. Both deals would eventually increase the cost of prescription medication in Canada (by hundreds of millions of dollars annually), both include extensive protections for foreign investors that undermine our ability to regulate (for environmental protection and consumer safety), and both were projected to have only modest impacts on actual trade (and in some studies a negative impact on employment).

Yet, in a serious case of cognitive dissonance, the government seems relieved the one deal (the TPP) will die by the hands of the incoming Trump administration, while the other (CETA), we're told, is a shining example of what #progressivetrade can look like. Though the government is comfortable spinning CETA as a progressive agreement, it's clearly less certain it can back those claims up in a debate.

CETA is being rushed through Parliament this month to make ratification possible as early as December. In its haste, the government tabled implementing legislation the day after CETA was signed in Brussels at the end of October, tossing aside the previous government's procedure for ratifying international agreements, which required 21 days' notice .

At committee, it's fair to say the deck is stacked against critics of the Canada-EU deal. So far, the CCPA was one of only a few critical voices invited to participate in the unreasonably short deliberations, and in an unusual move the committee will only consider written submissions from this witness list. Compare this to the TPP consultation process, which was extended twice for submissions from the public.

In my presentation to trade committee today I emphasized three areas where the costs of CETA ratification for Canada outweigh the deal's modest trade benefits. These problematic features are among the main reasons the deal has become controversial (in Europe and Canada) and why it is extremely worrying that CETA is being pushed through both the Canadian and EU parliaments with limited debate.

Potentially the costliest single chapter in CETA is on intellectual property rights. A considerable portion of Bill C-30, legislation before committee to ratify CETA, deals with changes to Canada’s patent regime in response to European demands for stronger protections--changes, we should add, that would be permanent in Canada even if CETA is never fully ratified in Europe due to member states pulling out.

By extending patent terms on brand name drugs and providing for a new right of appeal for patent holders in patent linkage cases, CETA would delay the introduction of cheaper generic medicines. This unilateral change to Canada’s drug regime will add an estimated $850 million annually to the overall cost of medicines in Canada, where we already pay the third highest costs per capita in the OECD for prescription drugs.

These increased costs will put more pressure on provincial health care systems, private drug plans and individual consumers. In fact, the costs of CETA's stricter intellectual property rules cancel out the potential benefits to Canadian consumers of tariff elimination on EU imports to Canada. It is imperative that the federal government release its own estimates of these increased drug costs.

In both Canada and the EU, the most controversial aspect of CETA is the inclusion of an investor-state dispute settlement process. Canada’s NAFTA experience with ISDS speaks for itself: we have been sued more times than Mexico, with corporations successfully challenging non-discriminatory public-interest regulations, contrary to the stated purpose of such investment protections.

Far from addressing the problem, CETA entrenches and expands the ISDS regime through an Investment Court System. While it improves some procedural aspects of ISDS, the substantive protections afforded to investors in this new "court" system are largely unchanged.

Foreign investors still receive extraordinary legal rights to sue governments for measures that may negatively affect their investments. These protections, which are not available to domestic investors or ordinary citizens, would expose taxpayers to large financial liabilities and threaten to chill public policy.

In contrast to these strong protections for investors and corporations, CETA’s labour, environment and sustainable development chapters are not subject to the general dispute settlement provisions and instead merely trigger non-binding consultations.

The third issue pertains to CETA’s impacts on public services and regulation affecting essential services. As in many Canadian trade deals, CETA would restrict governments’ capacity to regulate the entry and activity of foreign service suppliers in the domestic market—even when such regulations do not discriminate based on the nationality of firms.

By locking in market access for foreign service suppliers, CETA threatens the viability of public services. A “standstill” and “ratchet” mechanism forces governments to make any future regulatory decisions in the direction of even greater liberalization, including for many services that are on the list of exceptions. (I've written about this in more detail here.)

While a number of important public services are excluded from some parts of CETA, there is no way to take reservations against the agreement's core investment protections (such as fair and equitable treatment, Article 8.10), which would restrict the capacity of governments to reverse privatizations and expand public services, by making such decisions unpredictably costly.

Risks of a poor consultation

Five minutes does not give witnesses much time to put their main arguments on the record. The CCPA shares many more concerns about CETA with other public interest advocates, for example related to services, investment, intellectual property rights, temporary movement, financial services, public procurement and domestic regulation chapters. Many of those concerns are explained in the two Making Sense of CETA reports (in 2014 and 2016) the CCPA helped produce.

In my conclusion to the committee I emphasized that sufficient time should be taken to ensure these concerns are fully debated and that all interested stakeholders and citizens have the opportunity to be heard. The current conduct and openness of the Canadian government in ratifying CETA could well be a factor when European member states and their citizens consider whether or not to ratify CETA over the next several years. Recent events in the U.S. have borne out the risks of a backlash when controversial trade deals are pushed ahead without full and open public debate.

If the Canadian government and the European Union are serious about getting CETA right (of making it a "progressive" deal) they should take the time to make necessary changes. Full European ratification will require the approval of all EU member states, including some where opposition runs high to the Investment Court System. Permanently removing that system would help make CETA less objectionable and increase the likelihood of the deal being fully ratified.

But even if the ICS never becomes a reality, CETA would still be far from a progressive deal. It would be a mistake to ratify CETA in its current form, especially after such a hurried parliamentary review and inadequate public consultation.

Scott Sinclair is Director of the CCPA's Trade and Investment Research Project, and a co-editor, with Stuart Trew, of the book The Trans-Pacific Partnership and Canada: A Citizen's Guide (Lorimer, 2016).