CEO Pay: Out of Whack with Ontario's Minimum Wage

Last week, the CCPA revealed that the top 100 CEOs in Canada earn, on average, $7.96 million a year – or 171 times more than the average Canadian worker.  That’s also 373 times more than an Ontarian earning the minimum wage.

To put that in perspective, the Top 100 CEOs earn in one hour[i] what a minimum wage worker will earn in 6.5 weeks.  But there is one big caveat to this analysis - that minimum wage worker  must be lucky enough to have a job that consistently offers 40 hours per week, offers paid sick days and provides vacation pay. 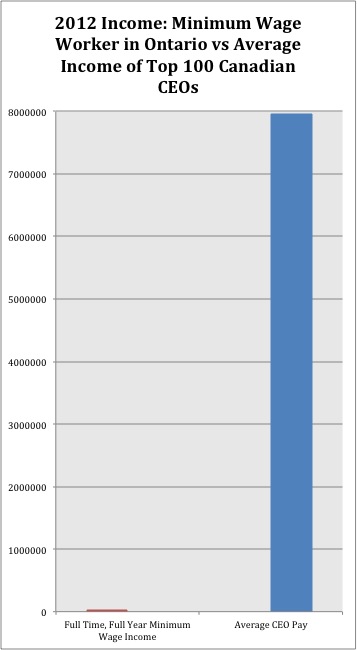 Source: CEO Pay from All in a Day’s Work: CEO Pay in Canada by Hugh Mackenzie, Minimum Wage: Author’s calculation based on 40 hours per week for 52 weeks a year at 10.25 per hour.

In order to earn $21,320 per year, a minimum wage worker must have a job that consistently delivers 40 hours a week.  The reality is minimum wage workers often work far fewer hours in precarious jobs where, week to week, they might not even know what their hours will be.

This wage also assumes that minimum wage workers will be paid even if they are sick – which would be the norm for a CEO as well as many other salaried employees.  Again, this is not the case for most minimum wage workers.  Instead, a minimum wage worker is often required to make the choice between a day’s pay (which will be used to pay the rent and purchase food) and a day’s rest (which they need when they have the flu).

I was in a fast food drive-thru just last month when I overheard the woman packing my lunch mention that she really should have called in sick that morning but couldn’t afford to. That's an employment condition that is unhealthy for all of us.

Yearly earnings of $21,320 for the year also assumes that minimum wage workers will actually receive the two weeks vacation pay they are required to receive under the Employment Standards Act.  My own experience working in minimum wage jobs informs me that workers often have to assert their rights in order to receive their vacation pay and may not do so for fear of losing their job.  CEOs, on the other hand, has their vacation time built right into their employment agreement – at least two weeks per year, but likely much more.

Despite the increasing cost pressures alleged by Canada’s business community, Canada’s CEOs have seen their pay skyrocket in the last decade.  The pay for Ontario’s lowest paid employees, on the other hand, has remained unchanged since 2010, when they got a raise to $10.25 per hour.

To find out more about CEO pay and how it compares to the average Canadian, visit policyalternatives.ca/ceo.

[i] Assuming 60 hours a week and only 2 weeks of vacation.