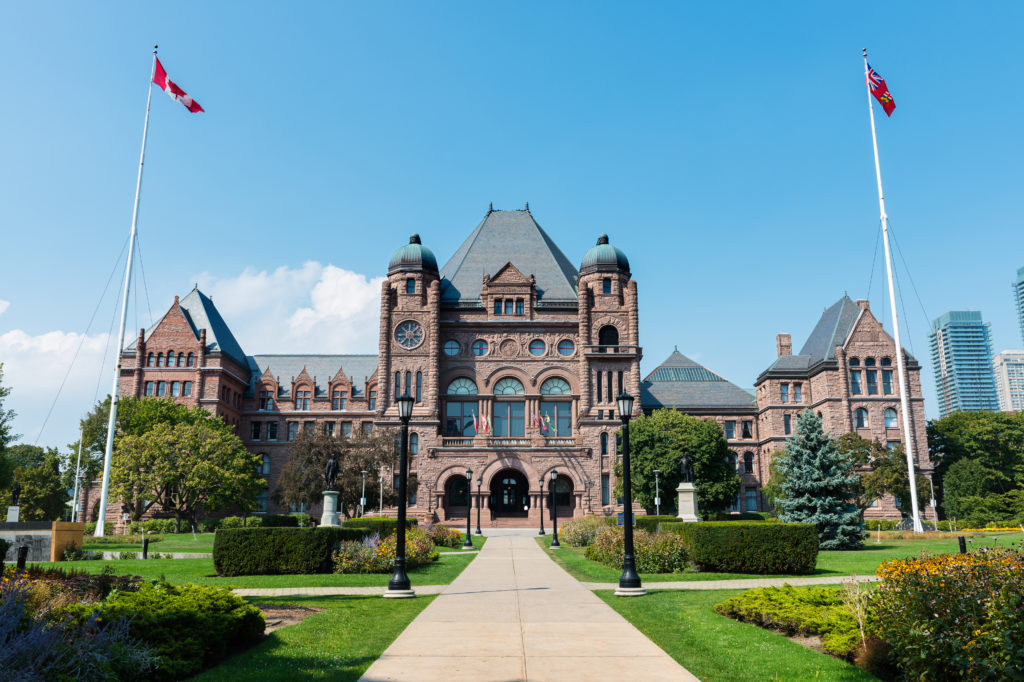 That’s how many times the Government of Ontario drew upon the word “care” in a throne speech designed to claim its stake in a pre-election period that has so far seen its share of ups and downs.

The Liberals aren’t the only ones focused on improving care. With the PC leadership drama ostensibly behind us, NDP Leader Andrea Horwath stepped into the spotlight over the weekend, promising pharmacare coverage for everyone (with access to 125 drugs to start with) and a new dental care program. These are two ideas that could galvanize her base.

While the NDP shares the Liberals’ emphasis on health care programs, when it comes to topline messaging, they join the PC party in calling for change. Both opposition parties are campaigning on a change ticket, trying to take advantage of polls indicating Ontarians may be growing weary after 15 years of Liberal governance. The PC People’s Guarantee platform, released under former leader Patrick Brown—and now very much in question—focused on the slogan Change That Works For You. The NDP’s slogan? Change For The Better.

Of course, Premier Kathleen Wynne is the one candidate who can’t run on a change ticket. Enter the care theme, its 62 mentions, and the topline message from the Liberal government: A Time For Care And Opportunity. And with the deliverance of the throne speech, the policy contours of Ontario’s election platforms are coming into clearer focus.

The throne speech pointed to a number of new commitments that will be detailed in the upcoming budget, and can be expected to carry over to the party’s election platform, including:

Home care and Long-term care: The throne speech promises major new investments to support aging at home through access to home care and financial support for families caring for aging loved ones. The speech made mention of the previous commitment to 5,000 new long-term care beds. Overall, the Liberal plan for home care stops short of the NDP’s call for a full “find and fix” public inquiry into the state of long-term care in Ontario.

Pharmacare: The governing Liberals have already rolled out the first provincial pharmacare program in Canada, providing more than 4,400 free medications for everyone 24 years of age or younger. The throne speech indicates the party would expand pharmacare to include other segments of the population. Meanwhile, the NDP is promising universal pharmacare (though it would start with access to only 125 drugs).

Dental care: The throne speech says more people will have access to dental care under the Liberals. Currently, the government offers its Healthy Smiles free dental coverage to anyone aged 17 and under. But the NDP’s big announcement this weekend goes a step further. Under the NDP plan, dental exams, cleanings, fillings, X-rays, preventative and minor restorative dental work and necessary denture fittings would be covered.

Mental health care: The throne speech committed to expand access to mental health care and addictions care. In contrast, the NDP is promising to create a new ministry focused solely on mental health issues. Under Brown, the People’s Guarantee promised funding for mental health initiatives, but it’s unclear whether the party will keep this item in its new platform.

Free tuition: The throne speech commits to growing the existing free tuition program for modest-income families whose youth are attending college or university. Ontario is home to some of the most expensive tuition fees in the country and student debt is a crushing burden for graduates. The throne speech also says “middle-class families will not have to shoulder onerous debt to give their children the opportunities every student in Ontario deserves.” This latter issue may be a nod to the NDP’s promise to “convert the provincial portion of student loans into grants that don’t have to be repaid.”

Poverty: The throne speech lacked specifics, but promises “the burdens of poverty will ease.” It’s unclear whether that means the government will improve the income security of those who qualify for Ontario Works and the Ontario Disability Support Program. Government-appointed working groups have recommended improved income adequacy for low-income Ontarians.

The throne speech was silent about the monkey that continues to be on this government’s back: hydro. The NDP has distinguished itself as the only party committed to bringing hydro back into public hands, which has created a wedge between that party and its competitors.

So the lines in the electoral sand are starting to get drawn, with both the Liberals and the NDP competing on “care” issues by promising significant new investments in essential public services and health care supports.

In order to fund this vision, the Liberal government has already said it will carry a deficit of less than one per cent of GDP (around $8 billion), tabling a plan in the upcoming budget to pay that down. Given the scope of the NDP promises, it looks to me that the party would run deficits in the first few years if it were elected the next government, unless it leverages more revenue-raising options.

It also remains to be seen what the NDP plans are for taxing the well-off. Under pressure from the NDP in 2012, former Premier Dalton McGuinty raised the tax rate on those earning $500,000 or more. In 2014, the Wynne government lowered that tax threshold to $220,000 and created another tax bracket for those earning $150,000 to $220,000. There’s room to go lower, but it’s not clear that any party will go there.

Both the Liberals and the NDP are committed to the current cap-and-trade program, which both pays for investments in a greener economy and can reduce carbon emissions. For his part, Ford has already denounced both cap-and-trade and the carbon tax. Eliminating the carbon tax leaves a $10 billion revenue hole in the PC People’s Promise over a three-year period. Once he unveils his five-point platform, we will see which People’s Promise platform items he dials back on in order to get his numbers to add up.

Ford claims he can find  “efficiencies” to support his goals, but any premier would be hard-pressed to do that without major public service cuts. As economist Jim Stanford writes: “Cuts of this magnitude would significantly damage government services (all the more so given continual inflation and population growth).”

Election campaigns are always unpredictable and Ontario’s 2018 election is clearly no exception. While many questions remain about the party platforms, one thing is for sure: our office calculators are fully charged and ready to crunch the numbers as they are revealed.