The release of Statistics Canada’s monthly labour force report is always keenly awaited by economists and policy-makers as a key indicator of Canada’s economic direction. But this month’s release will naturally attract more attention than normal, as it is the last jobs report before the federal election.

This latest report, based on the Labour Force Survey (LFS) conducted in September, showed a strong increase in employment (up 54,000 from the previous month), an even stronger increase in full-time jobs (up 70,000), a 0.2 point decline in the unemployment rate (to 5.5%), and an acceleration in hourly wage growth (up 4.3% over year earlier levels).

Despite that positive news, not too much significance should be ascribed to swings in the monthly jobs numbers: LFS data are notoriously prone to significant month-to-month volatility, which does not necessarily indicate a reliable trend. However, this final pre-election release does provide a convenient opportunity to review Canada’s longer-term labour market performance under respective federal governments. This report disaggregates the full Statistics Canada labour force series (going back to 1976) to compare how Canada’s labour market has fared under the current federal government, in comparison to those that held office previously during the 43-year covered by the Statistics Canada database.

By several indicators, Canada’s labour market has strengthened considerably in the four years since the last federal election. This positive outcome reflects many factors, and cannot be ascribed solely to the actions of the federal government (which has an important but limited impact on Canada’s economy). Nevertheless, having been achieved in the face of several significant economic headwinds (including international trade tensions and uncertainty, and fluctuations in world prices for Canadian commodities), this labour market improvement is a notable and positive development.

Statistics Canada’s LFS provides a consistent and comprehensive monthly database on labour market outcomes dating back to January 1976. (Earlier data are also available, but incorporate different definitions and methodologies, and hence are not strictly comparable.) This report analyses the evolution of several core labour market variables, through eight consecutive Prime Ministerial terms in office, as defined in the table below.

Seven different Prime Ministers were elected to office during this period (Pierre Elliot Trudeau had two distinct terms, interrupted by the short tenure of Joe Clark in 1979-80). We exclude the two very short terms in office of John Turner and Kim Campbell: both of whom became Prime Minister solely via internal leadership convention (and were defeated in subsequent federal elections), and neither of whom served in office long enough to meaningfully impact economic policy or conditions. (In our comparisons, their tenures have been appended to those of the elected Prime Ministers they replaced: Pierre Trudeau and Brian Mulroney, respectively.) Since the LFS data began partway through Pierre Trudeau’s 1974-1979 term as Prime Minister, only the latter part of that period is captured in the following comparisons.

In every case data are considered for the entire working age population—defined by Statistics Canada to include all Canadians 15 and over. For the unemployment rate, data are also provided for the youth labour market (comprising Canadians aged 15 to 24), which is often considered separately due to the particular challenges faced by young workers. Our comparisons use seasonally adjusted data (to control for the seasonal timing of respective changes in government). Average annual growth rates (for employment), and cumulative changes (for part-time employment, the employment rate, and the participation rate), are calculated  by comparing the first and last months of each Prime Minister’s time in office. Average levels (for unemployment rates) are computed over the entire period of each Prime Minister’s tenure (including the first and last months). 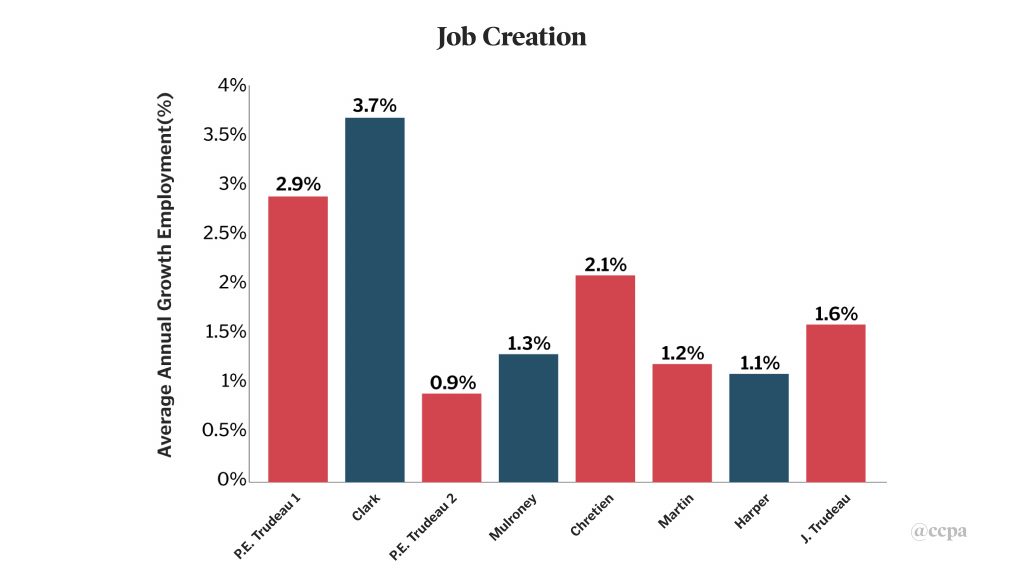 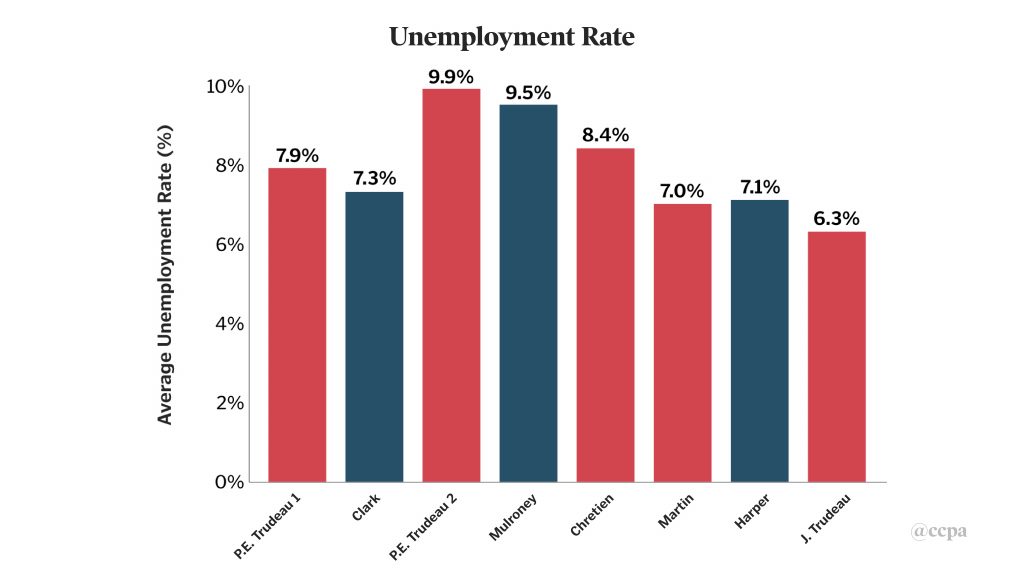 The unemployment rate averaged 6.3% during the current government’s term in office. That’s lower than any of the governments since the 1970s, and an improvement of 0.8 percentage point compared to the Harper government. By mid-2019, the unemployment rate declined to its lowest point in the history of the LFS data. 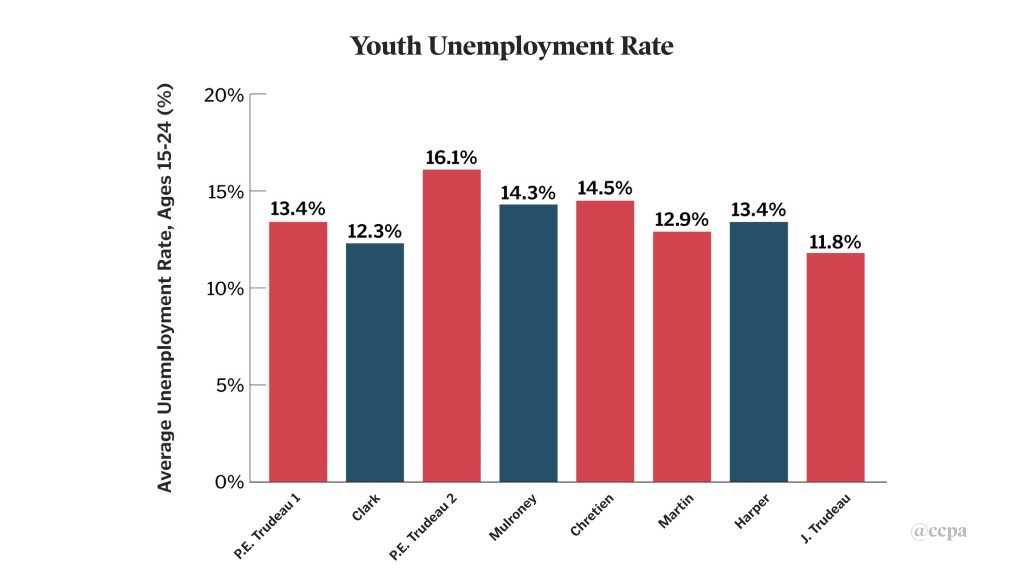 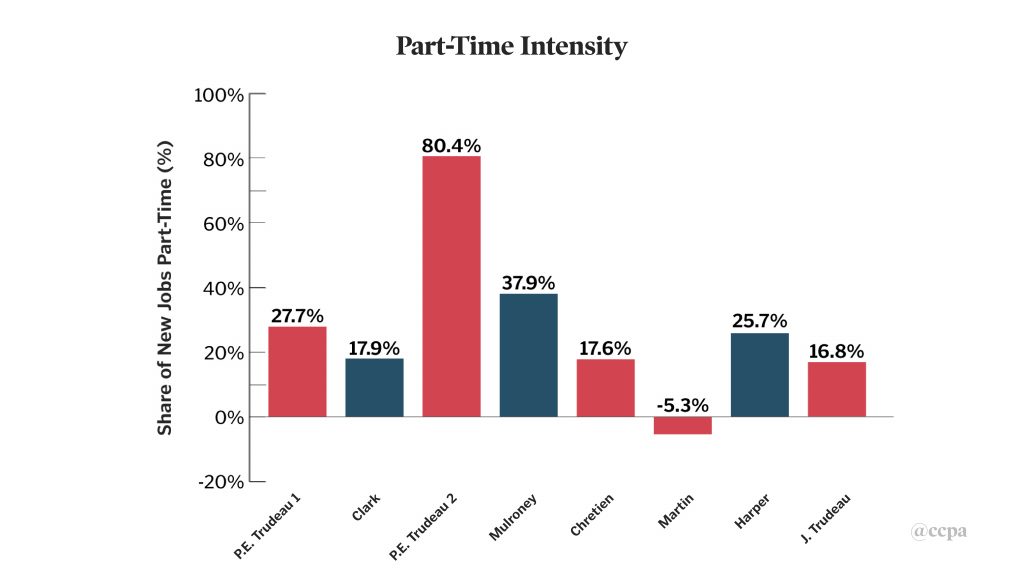 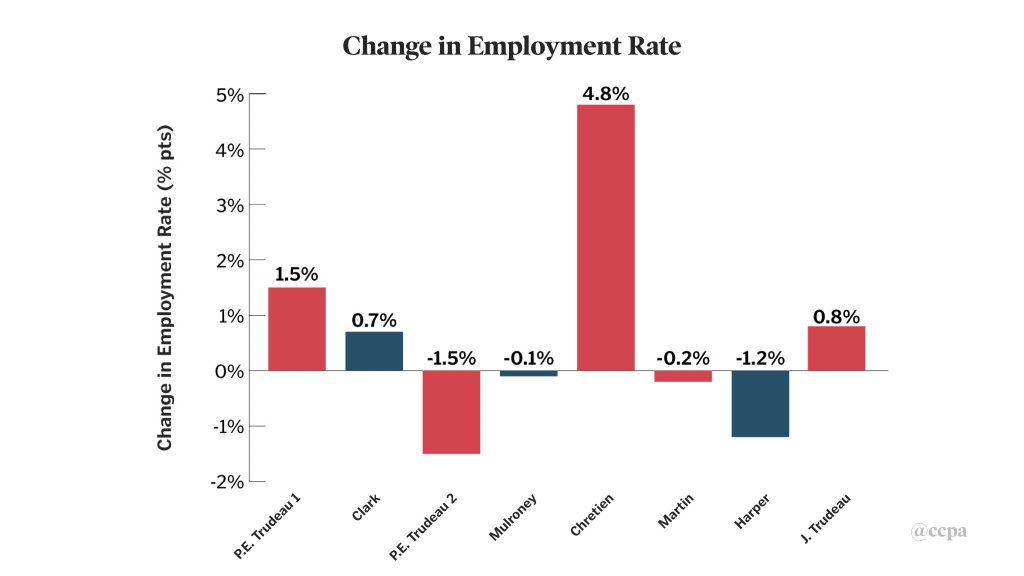 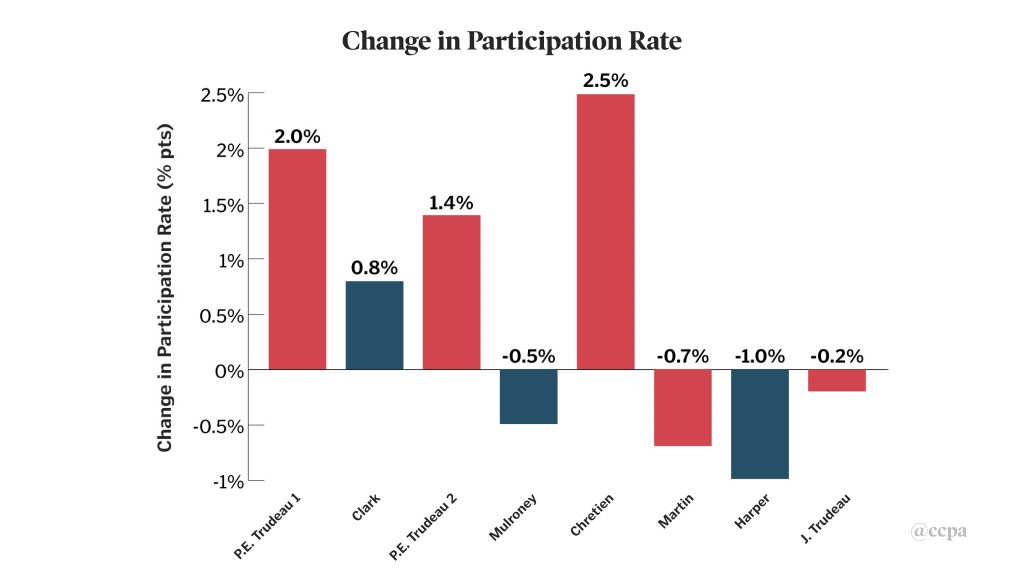 Another sign of job market well-being is a higher rate of labour force participation: that is, the proportion of working-age Canadians who are either working, or actively seeking work. Changes in participation can reflect demographic changes (such as women’s increased paid work or an aging population). Participation also responds to the perceived strength of job opportunities: it typically declines during periods of labour market weakness, and in turn can lead to long-term non-employment and exclusion. After several years of falling participation (including a full percentage-point drop under the Harper government—the worst of any Prime Minister considered), the decline in participation slowed markedly after October 2015. It declined by 0.16 percentage point under the current government. This was despite the underlying downward pressure on participation resulting from continuing ageing of the population—and hence is another indicator of improving labour market opportunities.

By the indicators surveyed here, Canada’s labour market has strengthened considerably in the last four years. Job-creation accelerated; the unemployment rate fell to multi-decade lows; the decline in labour force participation slowed; and reliance on part-time work declined slightly. For the first time since the 1990s, a larger share of adult Canadians was employed.

There are many factors, of course, contributing to this improvement in labour market performance under the current government—many of which have little to do with specific federal government policies. After all, in a mostly private-sector economy, government actions have an important but limited impact: driven both by direct government activity (public sector employment, public investment, etc.) and by the indirect impact of government policies (like taxes, spending, trade policies, etc.) on private-sector spending and activity. Given several negative factors affecting Canada’s global economic relations over this period (including deep uncertainty in trade; the application of U.S. tariffs on key Canadian exports; and the decline of world prices for key resources), the post-2015 improvement in labour markets is clearly attributable to domestic conditions. In this regard, the federal government’s willingness to increase program spending (rather than prioritizing deficit reduction), and the impact of its targeted income supports (such as the Canada Child Benefit) on the spending capacity of low-income households, will certainly have contributed to the notable improvement in labour market performance.

The strengthening of Canada’s labour market also provides some context for discussions of “affordability” that have played an important role in this election campaign so far. To be sure, many Canadians face a crisis of affordability, arising particularly from key components of living expenses (such as housing, child care, and prescription drugs) whose costs have increased far faster than overall consumer prices. However, measured by labour incomes, Canadians on average have clearly made progress over the last four years: a larger share of Canadians is working, and at the same time average real wages have increased modestly. Average hourly wages grew at an annual rate of about 2.7% since the last election: about three-quarters of a percentage point faster than average consumer prices; and more recently, hourly wages are growing by over 4% per year. Addressing the continuing and genuine challenges of affordability faced by so many Canadians, will require a multi-pronged approach:

The improvement in labour market outcomes since 2015 has obviously not solved all the problems faced by working Canadians and their families. But it has been important in expanding the opportunity to work, and modestly enhancing workers’ bargaining power to win better incomes and conditions. Over the last year, for example, with the unemployment rate at historic lows, the incidence of temporary work declined, average wage growth accelerated, and union density increased. This confirms the importance of expansive macroeconomic policy to both the quantity and quality of jobs. Tightening fiscal and labour policies, to once again prioritize deficit reduction and program spending restraint (rather than job-creation, stronger income supports, and new program spending), would likely lead to a reversal of this progress.

Jim Stanford is Harold Innis Industry Professor of Economics at McMaster University, Director of the Centre for Future Work at the Australia Institute, and a Research Associate of the CCPA.

Editorial note: this post has been updated to correct a typo in the spelling of Joe Clark.