Canada's rental market is, to say the least, unaccommodating 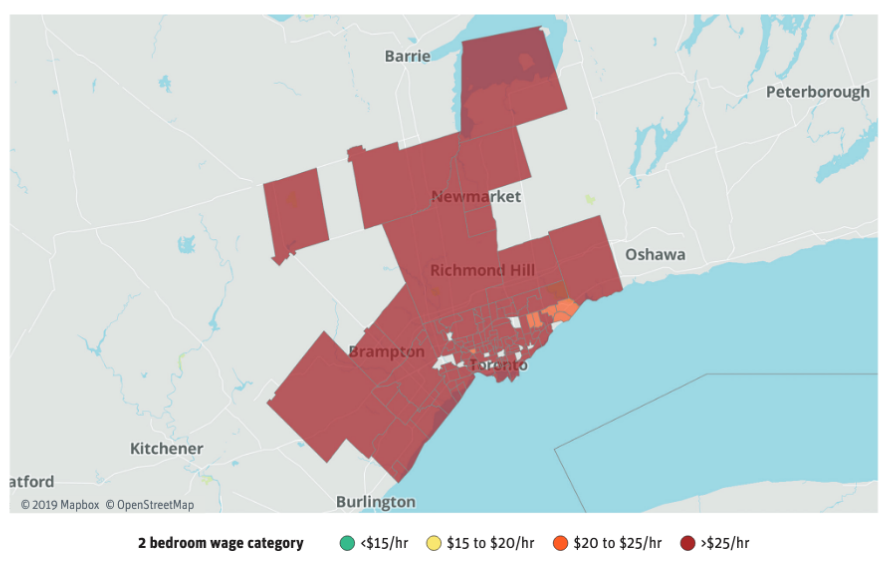 Rental wage map of the Greater Toronto Area. Click on image to go to our interactive map of rental wages across Canada.

When we talk about housing affordability the focus is usually on home ownership and high housing costs. Less discussed is the affordability crisis faced by the third of Canadian households (4.7 million families) who rent their homes. This paper looks at the extent of the problem by determining the hourly wage that a full-time worker must make to be able to rent an average two-bedroom apartment using no more than 30% of their income. We call this the rental wage.

In some cities the rental wage is much higher than the Canadian average. For example, a full-time worker in Vancouver, BC would need to make $35.43/hr to afford an average-priced two-bedroom apartment. A minimum-wage worker in Vancouver would have to work 84 hours a week to afford the average-priced one-bedroom apartment, or 112 hours a week for a two-bedroom apartment. The next highest average rental wages are found in Toronto, ON ($33.70/hr), Victoria, BC ($28.47/hr), Calgary, AB ($26.97/hr) and Ottawa ON ($26.08/hr). A detailed, searchable map of rental wages across Canada is available by clicking here.

For this report, we have determined the rental wage in 795 Canadian neighbourhoods based on two-bedroom rental costs, as two-bedroom apartments are the most common type, making up 50% of all units. One-bedroom rentals make up 36% of apartments, with the bachelor and three-bedroom (or more) categories each making up less than 10% of units. With two-bedroom units being more common, it is easier to determine the rental wage in more neighbourhoods outside of Canada’s biggest cities.

Everyone deserves a decent place to live. The two-bedroom apartment therefore serves as a proxy for various family types in Canada, since it offers a modest amount of room for multiple living arrangements. Many households rely on only one income but contain more than one person — single-parent families, for example, or an adult caring for a senior. A sole income earner working full time should be able to afford a modest two-bedroom apartment for their family in a country as rich as Canada. But in most Canadian cities, including Canada’s largest metropolitan areas of Toronto and Vancouver, there are no neighbourhoods where it is possible to afford a one- or two-bedroom unit on a single minimum wage.

The rental wage neighbourhood maps in this report and the accompanying online database show a common reality known to all renters, which is that it is more expensive to live downtown — close to most jobs — than in outlying areas that necessitate longer commutes and often the purchase of a car. The notable exception is Montreal where more affordable neighbourhoods continue to exist on the island itself and public transit is abundant. The highest two-bedroom rental wages are found in Toronto’s downtown Bay Street corridor ($73.17/hr), Vancouver’s North False Creek neighbourhood ($60.93/hr) and the Toronto waterfront and island area ($53.01/hr).

If we exclude condominium rentals, the two-bedroom rental wage was a fairly constant $17/hr prior to 2001 when it started to go up, hitting close to $20/hour by 2018. Though the increase is a result of many factors, some of which differ from province to province, one of the most important contributors was the collapse of new purpose-built rental construction (apartment buildings). In the late 1970s and early 1980s, over 100,000 new rental apartments were being built a year. That number dropped to 10,000 in the 1990s due in part to federal cuts to affordable housing funding. Between 1983 and 1993, 49% of all new rental builds were affordable housing units paid for with public money. In the 1970s and 1980s, substantial federal tax incentives also encouraged many market rental units to be built.

In the past three years, Canada Mortgage and Housing Corporation has introduced four long-term programs devoted to new affordable units: the National Housing Co-investment Fund, the Rental Construction Financing Initiative, the Affordable Housing Innovation Fund, and the Federal Lands Initiative. These programs jointly promise to deliver more than 110,500 new units by 2027-28. Combined with other provincial and federal programs, 15,100 and 16,600 new affordable units received commitments in 2017-18 and 2018-19 respectively — three-quarters of the 20,000 affordable units built each year between 1970 and the early 1990s.

Direct rental supports like the new Canada Housing Benefit—a cash supplement to low-income renters—could take the edge off housing cost increases for some renters while we wait for federally funded construction programs to kick into gear. But the benefit’s tight budget cap will necessitate the application of strict eligibility requirements that will push most low-income renters from the queue. In the long term, rental subsidies are no substitute for the construction of new affordable housing, which would increase vacancy rates, cool rental prices and allow more people to live closer to where they work.

David Macdonald is a senior economist with the Canadian Centre for Policy Alternatives. Read his new report, Unaccommodating: The Rental Wage in Canada, here.