Many analysts agree that this morning’s job numbers from Statistics Canada are dismal. Canada created only 81,000 new jobs between August 2013 and August 2014. That’s the smallest August over August change since 1990.

While taking a look at the Canada wide numbers is important to understanding the economic health of the country, zoning in on the provincial and regional levels can be very informative, showing that different parts of the country are driving different trends.

Ontario, for example, posted a disappointing 14,000-job gain between August 2013 and 2014 – that’s an average of 1,160 jobs per month. For the province with the largest population, and one that used to be considered by many to be the economic engine of Canada, that’s something to worry about.

Some of the noticeable trends in Ontario’s job numbers are the same that have been pointed out for Canada. 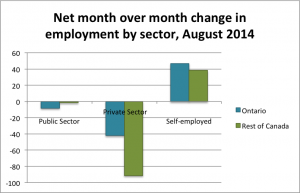 A few other national job trends, however, appear to be driven entirely by what is happening in Ontario. Employment loss for workers aged 25-54, for example, is entirely driven by Ontario. While workers in this age group in the rest of the country gained 36,000 jobs over the course of the year – losing 11,000 full-time positions and gaining 47,000 part-time spots – the same cohort in Ontario lost a total of 40,000 jobs –18,000 full-time and 22,000 part-time.

Workers aged 55 and over, on the other hand, took home the bulk of the employment gains across the country: 46,000 jobs in Ontario and 41,000 jobs in the rest of Canada. 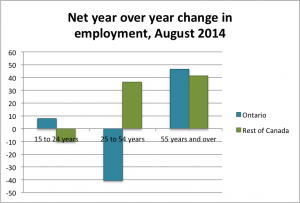 A small silver lining for Ontario in the chart above is that young workers actually gained employment in Ontario over the course of the year.

The goods producing sector in Ontario also took a beating – posting a year over year loss of 60,000 jobs. A full 80% of those jobs were lost in Ontario and the bulk of those were in the manufacturing sector. 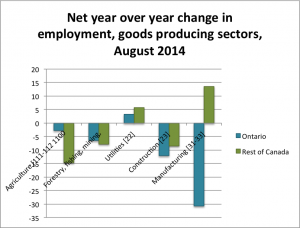 Unsurprisingly, in the face of losses in the goods producing sector, the services producing sector grew by 170,000 jobs between August 2013 and 2014 and gains were split evenly between Ontario and the rest of Canada.

These trends are part of a seismic shift that’s been happening in Ontario for some time; a shift from middle-income, goods producing jobs to a more polarized labour market with some higher and many lower paid positions.

If there is a small silver lining for Ontario in this month’s labour force survey release, it’s that the number of full-time jobs increased while the number of part-time positions shrank. It’s a shift that reverses the 2012 and 2013 part-time vs. full-timer trends. 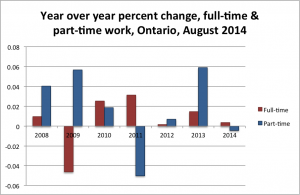 In other words: almost half of prime-aged working Ontarians are involuntarily holding down a part-time job when they’d really like a full-time job. That’s a trend that needs to reverse itself, and soon.