This week’s GDP numbers confirmed that Canada experienced a recession in the first six months of 2015 and today’s latest job numbers show Canadians looking for steady, good jobs have been feeling the pinch.

The real concern here is that the employment rate of 15-64 year olds has not yet returned to pre-recession levels. And job creation has barely kept up with population growth. 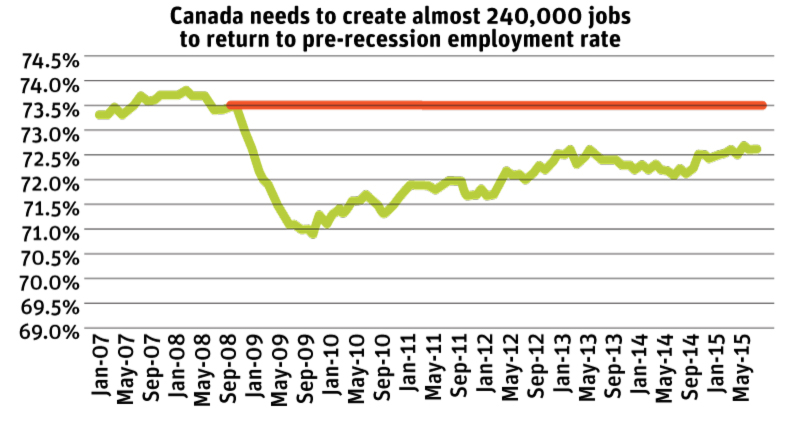 On the election trail, Stephen Harper has been suggesting that the decline in GDP has been contained in the oil and gas sector. But several other key industries that should be doing better are also in recession.

The numbers also show Alberta’s not the only province hurting. Across the country, only four provinces saw substantial job gains in the first eight months of 2015.

Alberta has certainly seen a decline oil and gas jobs, but since December 2014 the province has actually seen employment stagnate as those oil and gas jobs are replaced with jobs in the services sector including retail and wholesale trade and health care and social assistance. Prince Edward Island, New Brunswick, Nova Scotia and Saskatchewan have all seen declines in employment since December 2014. Clearly the job losses have not been contained in Alberta.

Job growth in 10 out of 16 industries either stagnated or declined in the first eight months of 2015. The stagnating and declining industries represent 60% of all jobs in Canada. And three of the six sectors where we see employment growth are supported by the public sector: health care and social assistance, educational services, and utilities have all seen job gains so far this year. Without those sectors, Canada’s job stagnation would be a lot worse.

The big surprise in the table below is that manufacturing jobs have stagnated at a time when many economists thought conditions were right for growth. The decline in the dollar was widely expected to have attracted manufacturers back to Canada – particularly Ontario. But that has not played out in the jobs numbers, nor in the GDP figures. The manufacturing sector’s job creation has stagnated, even as the U.S. economy strengthens and exports continue to grow – though that export growth appears to have come from an unusually large shipment of precious metals to the U.S. in July.

Nowhere in Canada was the drop in the loonie supposed to have had a more positive impact than in Ontario. But, as I pointed out last month, that has not been the case for manufacturing jobs. And the data shows that job creation in the manufacturing sector remains stagnant in the first eight months of 2015. 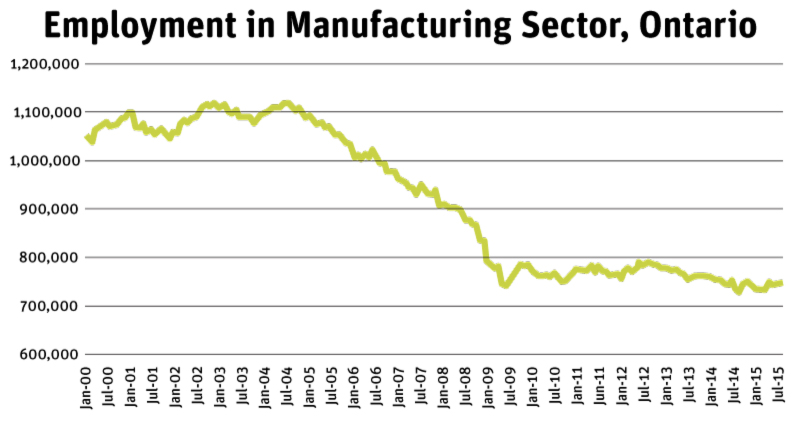 No wonder The Economist called Ontario the new rust belt of North America, pointing to scenes of “industrial decay” along the Niagara peninsula and southwestern Ontario.

Yesterday, TD Bank released a great report to help us understand the mechanisms behind this failure to launch.

That Ontario’s unemployment rate is lower than the national average is being heralded as a beacon of hope by some, but it masks the fact that Ontario alone needs to create almost 130,000 new jobs in order to reach pre-recession employment rate of workers age 15-64.

One bright spot on the national job scene this month is a slight increase in the participation rate, possibly indicating that people are seeing hope in the jobs market.

When it comes to jobs, Canada is still struggling with a hangover from the previous recession. The share of Canada’s part-time workers who would rather be working full-time continues to sit above 26%. Prior to the 2008-09 recession that number had fallen to below 22%.

Temporary work in Canada has increased slightly over pre-2008-09 recession levels as well —though it has come down from its 2012 peak. Long-term unemployment in Canada has held steady at around 20% since 2012 as well.

A large share of these trends is being driven by Ontario.

Ontario is home to more than one third of the electoral districts in Canada. And the province has remained a hot spot for all the three major party leaders as they campaign across the country.

As we move through this election season, it’s time to stop debating the semantics of this most recent recession — where it occurred and who it affected — and start talking about how to achieve a thriving labour market recovery with good jobs and stability for all.

Of course we at the CCPA have some ideas for how to make that happen: visit our GoodforCanada.ca platform to end income inequality. It’s an excellent place to start.