The conclusion of the Trans-Pacific Partnership trade talks in early October unleashed a torrent of talk about trade’s impact on Canadian jobs, particularly in the auto and dairy sectors. Less attention has been paid to the terms of the deal that govern labour mobility, which could affect virtually every sector of Canada’s job market, and jeopardize the ability of Canada’s next generation of workers to develop their skills and flourish.

As U.S. President Barack Obama has said, the TPP is rewriting the rules of business for the 21st century, including those with respect to labour mobility. Half of the 12 negotiating countries have large economies and aging populations, and the other half are populated by younger people with fewer opportunities. Labour mobility is an obvious solution to this apparent labour imbalance in the global market. But it’s crucial that we decide whether this happens through recourse to temporary, precarious work, or through a more just pathway of immigration leading to citizenship.

We like to think of economic migration as people coming to Canada to live, work and eventually become full citizens. While this still happens, it has been eclipsed by growth in temporary migration through two main government streams: the Temporary Foreign Worker Program (TFWP), and the International Mobility Program (IMP). Under the first, an employer looking to import workers from outside the country must prove that doing so does not displace qualified Canadian workers. No such assessment is required under the IMP. 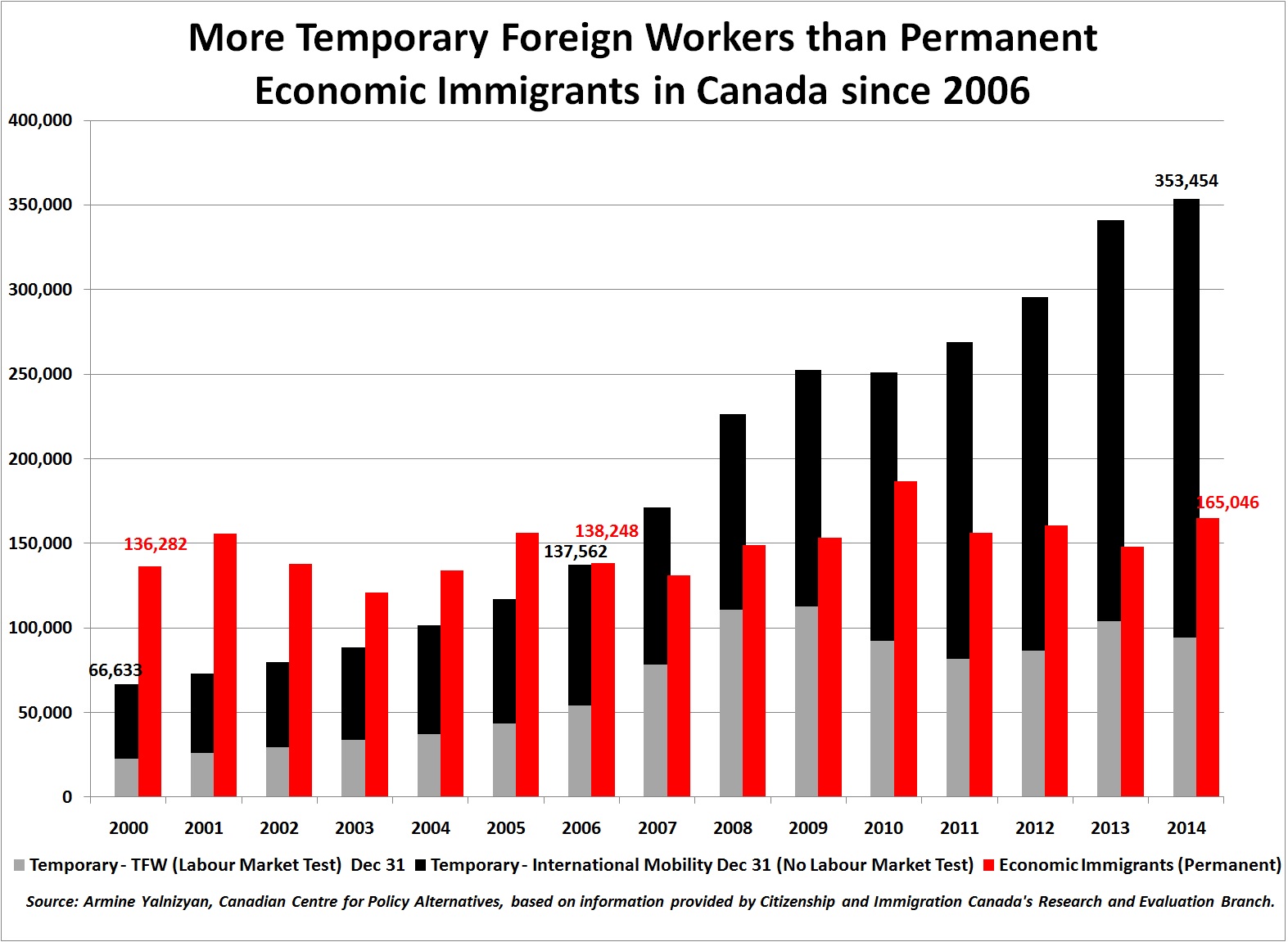 Intracorporate transfers have been a fact of life in Canada’s branch-plant economy for decades. Traditionally, the program was used to bring in business executives, professionals and highly skilled workers for short periods to enhance Canadian operations of multinational businesses. But all that’s changing. Intracorporate transfers are now one of the three fastest-growing categories within the IMP.

A firestorm erupted when IT workers at Royal Bank of Canada were asked to train temporary foreign workers from India who would eventually be doing their jobs overseas. It triggered a high-profile overhaul of the rules in the TFWP, but the workers at the heart of that story didn’t enter through that program. They were considered intracorporate transfers: RBC was not required to do an assessment of the impact the use of temporary foreign workers would have on Canadian employment. This is happening throughout the Western world. In Europe, multinational companies are using intracorporate transfers to import workers from low-wage jurisdictions to work in high-wage jurisdictions. Latvian workers earning a fraction of the local wage in Swedish sawmills are just one example. (On top of the TPP, Canada has signed a Comprehensive Economic and Trade Agreement with the EU that includes similar labour-mobility provisions.)

The underlying market dynamics of population aging should mean that young workers are poised to finally see some advantages in the world of work: more job opportunities, and higher wages or benefits to attract and retain employees in a context of widespread labour shortages. But as trade deals and immigration policies favour temporary foreign workers over homegrown workers, more churn is added to labour markets. The shorter the term of employment, the more competition for every opening.

Although the TPP creates some new job opportunities for Canadians in Pacific Rim countries, these will be short-term and sector-specific, whereas the impact of this deal on most Canadian workers could be long-term and diffuse.

With 15 side deals still being negotiated, its scope is yet to be defined. We need to pay careful attention to these details before either the TPP, or the CETA, is ratified. Their impact on Canadians will be more subtle and profound than anything we’ve dealt with before; we will need to be vigilant if these deals are to avoid fostering a growing class of the permanently temporary and erode the meaning of citizenship.

This piece originally appeared in The Globe and Mail.