Like university students cramming for an exam, last night the parliamentary public security committee (SECU) finished the last of nine hearings (over only six days) into the government's anti-terrorism bill (C-51). It's now up to the committee to perform a clause-by-clause review of the omnibus legislation and draft recommendations to the House, including possible amendments, before third reading, which is expected to happen quickly. The NDP and the Liberals have announced the amendments they will be seeking.

It's possible, though probably difficult for the government (given nearly every witness proposed at least one change to C-51, with a majority calling for greater oversight of Canada's national security agencies), that Conservatives on committee will force a vote on the bill as is. This would look pretty bad. Ed Broadbent's high-profile speech today in Ottawa included, "C-51 is flawed. C-51 is dangerous. C-51 must be defeated by Parliament." The no-compromise route could also rile Conservative voters, according to Tasha Kheiriddin of iPolitics.ca. On top of the recent criticism of C-51 from MP Michael Chong, the National Firearms Association and Connie Fournier of the FreeDominion web forum, Kheiriddin points out, "Former Conservative senator Hugh Segal supported the bill but called for more independent oversight. Former Security Information Review Committee chair Ron Atkey predicted the bill could not survive a constitutional challenge. So did Brian Hay, chair of the Mackenzie Institute, who said '… permitting a judge to break a law, or to ignore the Charter to uphold the law or to protect a society which is to be based on law, seems, at best, contradictory.'"

Last night's hearings added another friend of the government to the list of C-51's critics. David Matas, legal counsel with B'nai Brith Canada, explained that while his group supports new Criminal Code provisions for the promotion of terrorism, and the ability of security agencies to shut down websites that celebrate and encourage acts of violent terrorism against Jewish people and others, the bill as written is too vague on what constitutes terrorism, and contains no guidelines for when attorneys general are to give their consent for prosecution of a crime under the new definition.

Matas was also puzzled why the attorney general's consent was required for some activities, such as taking down a website or seizing materials, but not for the prosecution of advocating terrorism, suggesting this makes private prosecution possible, and could clog up the courts with frivolous accusations. "I've talked to somebody in the government about this and it may simply have been a drafting oversight," he said, adding that a law criminalizing advocacy of terrorism should not be too easy to use nor should it be "a dead letter." As reported today by the Canadian Jewish News, B'nai Brith's testimony "concluded with recommendations to help the bill avoid 'vagueness and overbreadth' and 'meet Charter [of Rights and Freedoms] standards.'" 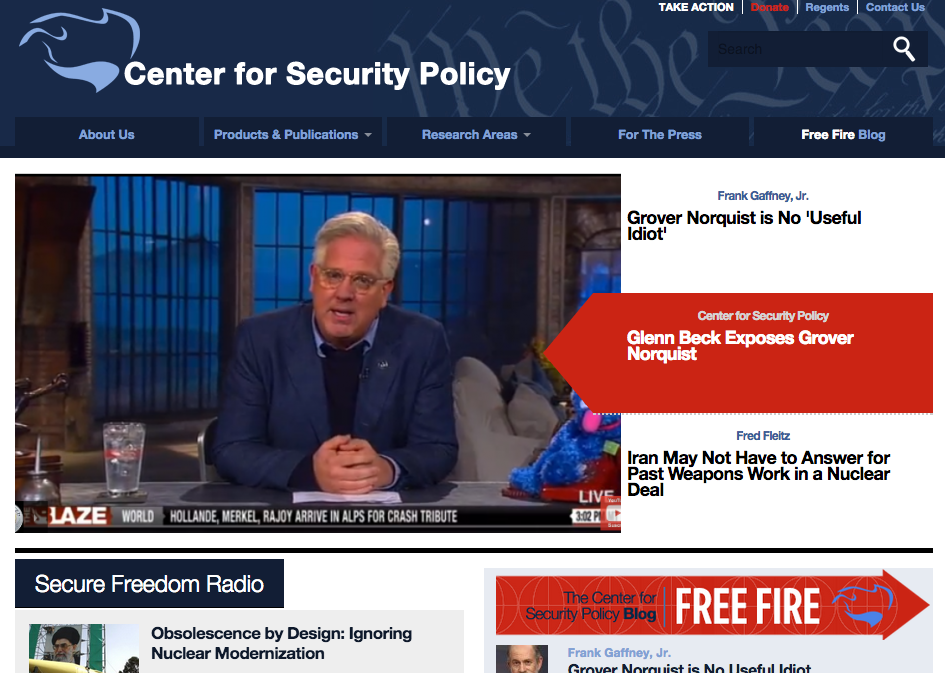 On a much less serious note, the committee also heard last night from Clare Lopez of the Center for Security Policy, whose website currently features Glenn Beck giving a "one hour overview of Grover Norquist's Terrorists (sic) and Muslim Brotherhood connections." Lopez, who arrived a bit late to the committee (possibly via black helicopter), is former CIA and now an expert on the Brotherhood's "plan for the infiltration and subordination of America." Like other witnesses who focused on the Muslim Brotherhood (yes, there were more than one) or ISIL's motives instead of C-51, Lopez disputed the "lone wolf" theory, suggesting Michael Zehaf-Bibeau, the Canadian who attacked Parliament on October 22, was more likely a "known wolf" with connections to the global jihad. (God help us if any of this ends up in the committee's final report.) Elizabeth May, who was denied a speaking opportunity during the C-51 hearings, put it nicely in a tweet last night: 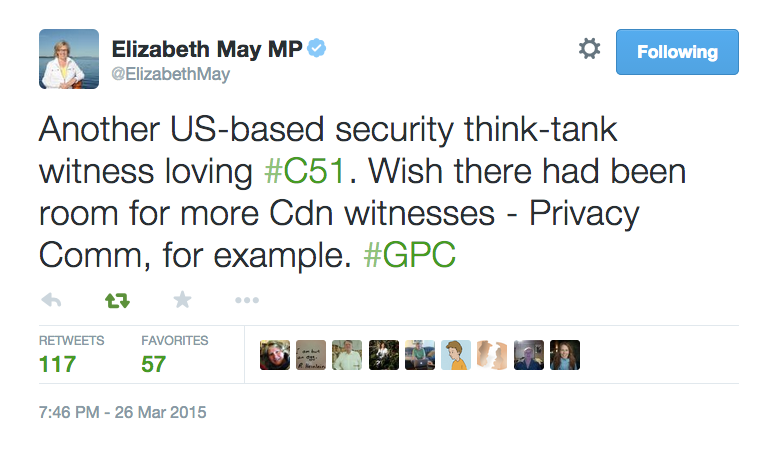 Yesterday I asked what C-51 was for if not stopping terrorism. There are no new resources for the RCMP or CSIS built into the omnibus bill, just new responsibilities and a wider net of possible security threats to cover, including legitimate protest activities. Statements to committee from police witnesses that the RCMP, CSIS and local police have better things to do than spy on low-level protests are contradicted by recent leaks and much of the historical record. Promises by those same people, and lecturing Conservative members on committee, that the new powers in C-51 won't be used to suppress dissent among Indigenous communities and environmentalists ring hollow.

One possible reason we're seeing this specific legislation at this specific time was never mentioned: ongoing perimeter security talks with the United States. The Beyond the Border Action Plan, launched in December 2010, called for Canada and the U.S. to "improve information sharing, including developing clear and responsible channels or mechanisms for cross-border sharing of information and intelligence." It's part of a suite of measures to increase co-ordination of customs, security and immigration policy, including the collection and sharing of biometric data in an effort to better track flows of "legitimate" versus threatening goods and people into and out of North America based on a common set of criteria for what constitutes a threat. The two countries just signed a pre-clearance agreement that had been in the works for about a decade, delayed by White House demands for U.S. customs agents at Canadian pre-clearance sites to be able to search, investigate and fingerprint people, even when they choose not to cross into the United States.

Things seem to be moving forward, though without all the details yet (the pre-clearance deal will need new legislation) it's hard to know if, for example, privacy is being compromised in the process. We know privacy is definitely threatened by C-51 because Canada's privacy commissioner, Daniel Therrien, said so in a written submission (he was prohibited from appearing before the SECU committee):

Clearly, protecting the security of Canadians is important, and we recognize that greater information sharing may sometimes lead to the identification and suppression of security threats.  However, the scale of information sharing being proposed is unprecedented, the scope of the new powers conferred by the Act is excessive, particularly as these powers affect ordinary Canadians, and the safeguards protecting against unreasonable loss of privacy are seriously deficient.  While the potential to know virtually everything about everyone may well identify some new threats, the loss of privacy is clearly excessive. All Canadians would be caught in this web.

I don't want to imply that Canada's only or even most important reason for introducing C-51 was to satisfy the endless U.S. hunger for data. (What would new Walrus editor Jonathan Kay think of this "spurious intrusion of Yankee bogeymen?") But I don't think it's inconsequential either. There must be a reason why neither the Liberals nor Conservatives will act on the recommendations of the O'Connor and Iacobucci Commissions with respect to sharing intelligence with foreign governments, one of which was that it should happen in accordance with clearly established policies respecting screening for relevance, reliability and accuracy, and that these activities should be carefully monitored by a centralized unit with expertise in national security. As lawyer Paul Champ said in his presentation to SECU committee on C-51:

There are also very specific dangers associated with information sharing that can have devastating consequences for individuals. It can lead to damaged reputations, loss of employment, being barred from flying or crossing the border, and worse. As two public inquires found, in the wake of 9/11 fears, four Canadians were detained and subjected to torture due in part to erroneous or improper information sharing by Canada with foreign countries... One could conclude that the government appears to have not learned the lessons of the Arar debacle, were it not for the inclusion of s. 9 in the new Act. That provision protects the government from future civil liability for information sharing, which would likely prevent Maher Arar from suing if he were to experience the same terrible ordeal today.

Many witnesses presented on the threats and inconveniences that C-51's information sharing provisions will create for totally innocent people without improving the ability of Canada's security agencies to stop potential terrorist attacks. It is unfortunate that there was not more time at committee to discuss the ways that the Beyond the Border negotiations might compound these threats. On the other hand, I'm sure there will be an excellent section in the committee's final report on Muslim Brotherhood infiltration of Canadian universities, community centres and other public institutions. Lock up your children!