Public attention in Canada is appropriately focused on proposed omnibus security legislation (Bill C-51) that, from most expert accounts, appears to unnecessarily weaken privacy protections and threaten civil liberties to give Canada's spy agencies, the Canadian Security Intelligence Service and the RCMP in particular, new powers of preventative arrest and the ability to disrupt potential terrorist activities (through illegal means if a court warrant will allow it).

The government had wanted to rush C-51 through Parliament, but public and parliamentary opposition forced the Conservatives to hold nine committee hearings (rather than the three they originally proposed). Those hearings began today, with Public Safety Minister Steven Blaney, Attorney General Peter MacKay, RCMP Commissioner Bob Paulson, and CSIS Director Michel Coulombe fielding most questions from the all-party (minus the Greens) standing committee on public safety and national security.

Though the CCPA does not have a full-time security expert on staff, we wanted to contribute to the important debate on C-51, and decided that a compendium of these hearings--the testimony presented and the response of government and opposition MPs--could be useful to the public. Rather than explaining each issue and argument outright, we'll hyperlink to those who can do it better. That will include links to presentations to the committee (where they're available), news articles, videos and anything else that seems relevant. Before getting to today's hearing, a bit about why C-51 is so controversial.

The legislation is criticized for broadly expanding the definition of what constitutes a threat to Canada's national security (for the purposes of information sharing between government departments and with foreign states in a way that could put innocent people's security and privacy at risk), creating a new offence related to encouraging acts of terrorism that could put a chill on free speech, lowering the threshold for when someone can be detained, on a hunch they "may" (versus "will") commit a terrorist act, and for when they can be placed on Canada's "no-fly" list (without making it any easier to have your name removed), and mandating CSIS to take measures at home or abroad to disrupt potential terrorist acts, a power Canadian spies have not had since the 1970s.

For an excellent summary of the legislation, and its many problems, see this recent post by the Voices-Voix coalition and a primer by lawyers Clayton Ruby and Nader Hasan in the March issue of the CCPA Monitor. Legal experts Kent Roach and Craig Forcese are contributing regular critical commentary on Bill C-51 (and have just released a useful list of proposed amendments) on their joint website www.antiterrorlaw.ca.

Blaney opened today's hearings with the government's justification for introducing the new omnibus security bill. He said the attack at the War Memorial and Parliament in October reminded us we need to be vigilant about the evolving terrorist threat, repeating (using only slightly different wording) the Prime Minister's warning that "The international jihadi movement has declared war on Canada," that the jihadis "hate our society and they hate our values," and that their only goal is to "destroy the very principles that make Canada the best place in the world to live." (Later on, Blaney says only the terrorists can take away our rights and freedoms. How they plan on doing this without a strong, stable, majority government was left up to the imagination of committee members.)

The public safety minister outlined the gaps C-51 attempts to fill, notably the apparent inability of government agencies to share or accept information from each other related to potential threats to Canada's national security. While the government claims this will address a recommendation coming out of the Air India inquiry, critics like Forcese and Roach are worried that the overly broad definition of what constitutes such a threat (e.g., threats to the appropriate use of critical infrastructure), and the lack of caveats (e.g., limiting the information shared to what is "necessary" and "proportionate" versus simply "relevant") could compromise the privacy and safety of critics of the government's economic and energy policies.

Blaney suggested in his presentation and in questions from MPs that "legitimate" protests would not be affected, calling the suggestion they could (by "so-called experts") "frankly false and ridiculous," though it is lawyers, former judges and legal experts suggesting it. He also said, with respect to CSIS's expanded powers of disruption (he gave the example of stopping a shipment of weapons, but also revoking a person's passport, blocking someone from from associating with certain people, or putting someone under preventative arrest), the existing definition of what is a threat to Canada from the CSIS Act would be applied--not the new one with respect to information sharing.

MacKay focused his presentation on the changes to the Criminal Code that lower the threshold for preventative arrests, recognizance and disruption, which Ruby and Hasan describe clearly in their CCPA Monitor article. He also said, as Blaney did at the top, that these measures "fill a current gap in the law" both with respect to allied countries having comparable powers, and making it a crime to counsel someone to commit an act of terrorism.

Questions from opposition MPs focused on three themes: how to ensure CSIS is not acting inappropriately, or outside the scope of the warrants they will need to acquire to engage in certain disruptive or anti-terrorism operations at home and abroad, as a federal court judge found, in 2013, they were already doing; the general inadequacy of existing oversight mechanisms for CSIS, RCMP and other government security activities; and whether the government can truly guarantee that increased information sharing between national, provincial and foreign agencies will not ensnare legitimate protest movements. (Blaney also took some heat, in committee and on Twitter, for comparing the promotion of terrorism to the holocaust.) 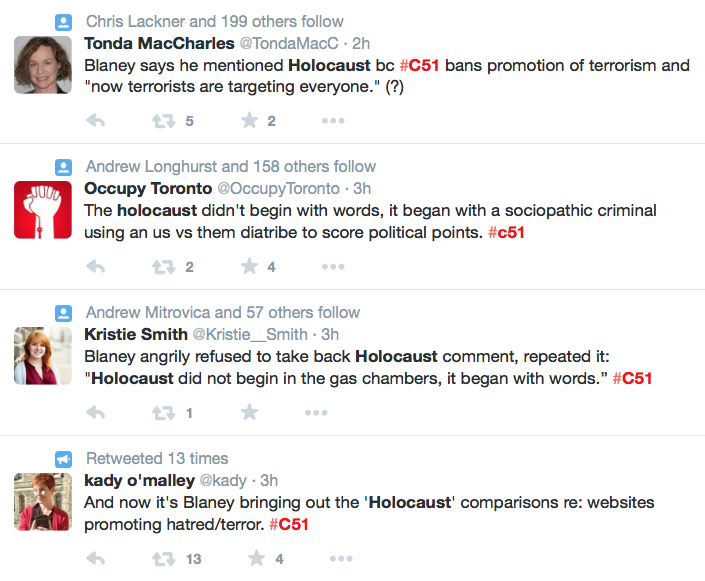 The NDP's Randall Garrison asked MacKay whether he would be willing to table the advice he received on the constitutionality (or not) of the amendments proposed in C-51. The minister responded he would not, since this would somehow breach solicitor-client privilege between the Department of Justice and Department of Public Safety, and that, in any case, his people (in the DoJ) are OK with it and that's OK for MacKay. (Garrison later asks the government ministers present why the federal privacy commissioner was not asked to present to committee; MacKay blames the opposition for not putting his name on their lists of potential witnesses.)

Liberal Wayne Easter repeatedly asked where the oversight was, proposing the creation of a parliamentary body for the task similar to what exists in the United States and U.K., and as the public safety committee recommended in its 2009 incarnation. MacKay deflected by asking why the previous Liberal government didn't do the same when it had the chance, and pointed to a sunset clause in elements of C-51 related to the lower thresholds for recognizance and the issuance of peace bonds for suspicion someone "may" commit a terrorist offence. Both he and Blaney repeated the government's view that no further oversight is required beyond the underfunded variety offered by the Security Intelligence Review Committee (SIRC). ("Red tape" they called it in February.)

Hearings continue on Thursday, and then each Tuesday and Thursday for nine full sessions. On March 12, witnesses will include the British Columbia Civil Liberties Association, Greenpeace Canada, Ron Atkey (adjunct professor, Osgoode Law School), the Assembly of First Nations, the International Civil Liberties Monitoring Group, and Barry Cooper (University of Calgary professor). We'll have summaries and (hopefully) links to their presentations online by midday.