Twenty-five years ago, 50,000 activists, diplomats and world leaders met at the Fourth World Conference on Women in Beijing, China, to plan for a world in which all women everywhere—in all of their diversity—could live full and equal lives. The resulting Beijing Declaration and Platform for Action was the most progressive blueprint ever for advancing women’s rights. Considerable progress has been made in the intervening years. But no country—including Canada—has finished this agenda.

Canada is not nearly close enough to meeting the goals set out in the Beijing Declaration: women are still waiting for meaningful equality. With International Women’s Day this weekend and the federal budget on the horizon, now is the opportune time to act concretely on the unfinished business of gender equality.

Unfortunately, all things are not equal, and the gaps are especially wide and persistent for marginalized groups of women in Canada—as highlighted the newly released Parallel Report on Canada’s Implementation on the Beijing Declaration and Platform for Action.

The Global Gender Gap Index summarizes the national story. In 2006, the first year that the World Economic Forum published its index, Canada ranked 14th out of the 115 countries surveyed. While Canada eked out small annual increases in its score between 2006 and 2014, by 2015, our ranking had fallen from 19th to 30th place (out of 145 countries). In 2016, our ranking dropped again to 35th place. 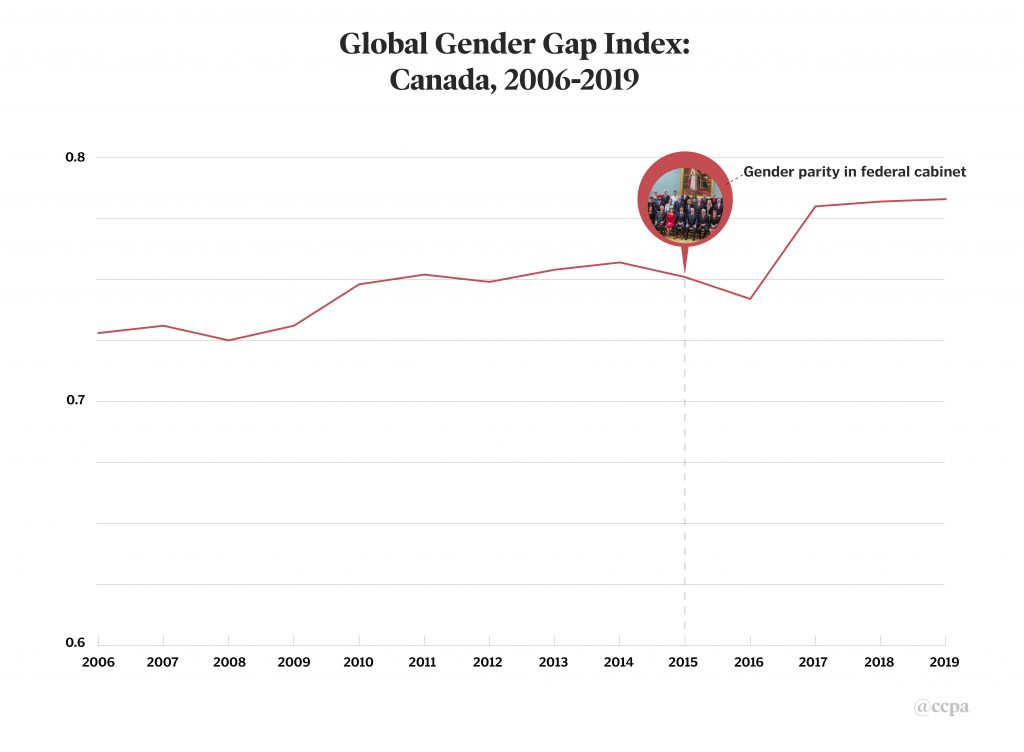 Canada turned this around in 2017, moving up the index to 16th place and holding that position in 2018—the direct result of a boost in women’s representation in the federal cabinet after the October 2015 election. This past year, Canada fell down the ranks again to 19th position as other countries stepped up their game.

At this rate—one step forward, two steps back—Canada will not achieve gender parity for years to come.

A closer examination reveals uneven progress across the different domains. Near perfect scores in the areas of health and educational attainment in Canada have not translated into notable progress on the economic front or in women’s representation in leadership.

Progress in education has not produced an equally steady level of progress in women’s economic security. Canada’s score for economic participation and opportunity in the WEF gender gap index is well below our positive standing in health and education. Between 2006 and 2019, Canada’s gender gap in this area inched forward an average of 0.2% per year—a glacial pace by any standard.

The gap between men’s and women’s earnings is a significant factor in Canada’s mediocre showing in this area. Canada’s gender pay gap is one of the highest in the OECD: we are in 25th place out of 29 countries, behind all European countries. Average full-time earnings among Canadian women are certainly higher than in many countries, but they are still paid only 81 cents on average for every dollar men take home.

The gap is even larger for racialized women and Indigenous women, who make 60% and 57%, respectively, of what non-racialized men earn. If those Indigenous and racialized women had been making the same salaries as their white male peers, their bank accounts (and the Canadian economy) would have been $43 billion richer in 2015.

Women and girls face gender-based violence in many forms

All people deserve to live and work in environments that are safe, inclusive and fair. Yet gender-based violence is still a daily reality for far too many people in Canada. In 2018, over 75,000 women reported incidents of intimate partner violence to the police; tens of thousands more incidents go unreported. Estimates of unreported sexual assault and criminal harassment are even higher.

The experience and threat of violence is particularly acute for Indigenous women, women with disabilities, and LGBTQI2S+ people. Research from the National Inquiry into Murdered and Missing Indigenous Women and Girls found that Indigenous women and girls were 12 times more likely to be murdered or missing than any other women in Canada, and 16 times more likely than white women. Almost half (45%) of incidents of violent crime reported by women—that is, sexual assault, robbery, or physical assault—involved a victim with a disability.

The closer women get to closing the gender gap, it seems the greater the barriers become to achieving equality. It’s also clear that the barriers are considerably higher for women and gender-diverse people who face multiple and interacting systems of oppression that systematically undermine their human rights and reproduce inequality.

We’ll have another chance to assess the government’s track record with the release of the 2020 Budget and we’ll be looking for action in the following areas:

Strengthen labour market regulations: Gender equality at work means fair wages and working conditions across the labour market. To this end, new pay equity legislation is welcome. What is needed now are the resources and a strong set of regulations (including pay transparency provisions) to ensure that we won’t be involved, once again, in decades of litigation, continued exploitation and economic hardship.

Tackle the unequal division of care: Women in Canada continue to spend much more time on unpaid care work than men do. The new “use it or lose it” parental sharing benefit for second caregivers holds promise as a strategy for encouraging a more equitable division of caring labour, but it does little to improve access to the maternity/parental benefits or tackle the needs of low- and modest-income families, a significant number of whom do not have the hours of insured employment necessary to qualify for support. Families need greater flexibility in the use of maternity/parental leave benefits and expanded access to these programs. The federal government should take a leaf from Quebec’s successful parental leave system and increase benefit levels as well.

Build a national system for child care: Accessible and affordable child care is the one of the best levers the government has for supporting female labour force participation, fostering healthy child development and tackling the roots of inequality. There is broad popular and political support for child care: prompt, substantial action on child care is now needed. One billion dollars per year over the next 10 years, along with supporting legislation, will build out a national system that delivers affordable, high quality, inclusive child care for all across the country. Additional funds will fully operationalize the Indigenous Early Learning Child Care Framework, ensuring that all Indigenous children have access to spiritually enriching, culturally relevant, high quality Early Learning and Child Care.

End violence against women and girls: During last year’s federal election $30 million was promised toward a National Action Plan to address Violence against Women. Next steps must be taken quickly to get it off the ground so new funding, programs, and services can be launched. Community experts and women’s rights organizations have already provided a blueprint for action. Indigenous women’s organizations are also ready to guide the development and implementation of a fully-resourced National Action Plan to combat all forms of violence against Indigenous women and girls.

Pursue progressive tax reform: The federal government should take immediate action to ensure the generation and stability of federal revenues through progressive tax reforms. This includes the elimination of wasteful and regressive tax loopholes and expenditures, as well as those that overwhelmingly benefit wealthy Canadians and corporations and undermine women’s economic security. Men capture the majority of the benefit from these tax breaks. Right now, 62 cents of every dollar in tax breaks flow to men. Women and girls lose out from the cumulative impact of these policies, first when they lose access to essential public services due to a lack of funding, and secondly, when they are forced to fill the gaps with many hours of unpaid caring work.

Check out the forthcoming Canadian Centre for Policy Alternatives’ Alternative Federal Budget 2020 for our detailed recommendations.

Unfinished Business: A Parallel Report on Canada’s Implementation of the Beijing Declaration and Platform for Action is available for download on the CCPA website. The report was produced by a network of more than 50 women’s rights and equality-seeking organizations, trade unions and independent experts representing millions of members from across the country.

Want more Budget 2020 analysis? Sign up for our newsletter to get it delivered straight to your inbox!