Most Canadians have already heard about the extremely concerning meat contamination at Alberta’s XL Foods. Some have already gotten sick and today the list of beef products being recalled has grown again.

The circumstances of how the meat plant closure occurred are also concerning. It appears that US food inspectors at the US border caught some of the first E. coli contaminated meat from XL. The Canadian Food Inspection Agency (CFIA) banned exports from XL to the US three days before Canadians were alerted. CFIA is facing some serious questions about why US customs is harder than it is on Canadian beef, why it didn’t do more despite early warnings, and why the problem was not caught far earlier before a massive recall and plant shutdown became necessary.

If anything is to be concluded from this most recent food safety failure, it is that the CFIA needs to be more vigilant in its inspections, it needs more inspectors, and those inspectors need to be better trained to spot problems early and deal with them instead of relying on their US counterparts to do its job for it.

Despite these glaring issues, the CFIA, like many other federal departments and agencies, is facing budget and staffing cuts. In fact, April 2012 marked a high point in staffing at the food safety division of CFIA. 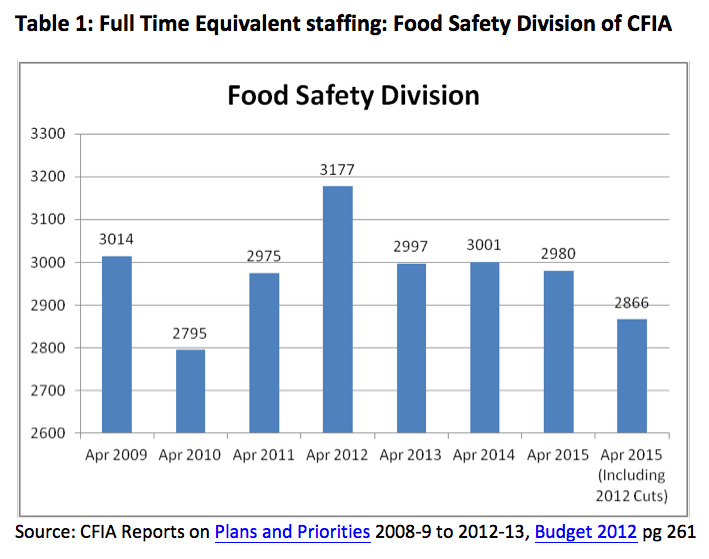 There are several other divisions of CFIA that deal with other aspects of food inspection. The complete CFIA department is planning to cut 754 FTEs between April 2012 and April 2015. This represents an 11% decline from peak staffing of 6,914 FTEs in April 2012.

The cuts to CFIA are but a small part of the overall spending and job cuts emerging from the last couple years of federal government cutbacks. However, the impacts even in this small area could be lasting for Canadians and the safety of their food. Debacles like those at XL Foods illustrate the critical role that the federal government has in regulating industry and keeping Canadians safe. When the government starts indiscriminately cutting back on the services its delivers, Canadians sooner or later end up in harms way.

The cutting of 10% of those working in food safety is not set in stone, it can be changed at any time. Given that an already dangerous situation will be made worse by future cutbacks, the federal government should re-examine its austerity agenda to keep Canadians and their families safe.

David Macdonald is a senior economist with the CCPA (http://policyalternatives.ca).