Another year, another dead Canadian tech giant. Blackberry was sold yesterday for scrap to the Toronto private equity firm Fairfax. The purchase price of $4.7 billion is essentially valued at its cash of $2.6 billion and the value of its patents. Blackberry’s active businesses are essentially being valued at nothing.  If Fairfax can stop the incredible burn rate of $1 billion a quarter and make Blackberry’s enterprise encryption business sustainable then there is probably money to be made.  Best of luck to Fairfax in trying to recover some value from this slow motion train wreck.

The impact of Blackberry’s sale will be deeply felt in the Kitchener-Waterloo area as 40% of its workforce is laid off. The impact on that region will go further as contracts with local suppliers are cut and the momentum for the burgeoning local tech industry in Waterloo looses steam.

The national implication of Blackberry’s implosion will be most acutely felt in Canadian business R&D spending. In 2012, the handset maker spent $1.5 billion on R&D beating out both Bombardier and BCE as Canada’s top R&D spender. In fact, Blackberry’s research and development represents approximately 10% of all business R&D in Canada, and about 25% of all technology R&D in the country. Needless to say, Blackberry’s 2013 R&D budget is going to be much, much smaller.

Blackberry’s fall from grace merely highlights an ongoing issue for Canadian value-adding companies, we only seem to have room for one champion at a time. Four years ago it was Nortel. Try to name another home-grown company with a strong technology and export record, outside of resource extraction, and you come up with a very short list. Maybe Bombardier and Magna. 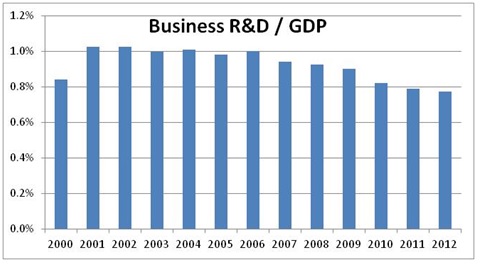 In Canada, we often throw our hands up over matters like these, concluding that the market must be right and we should go back to what we’re good at—raw resource extraction, exported as quickly as possible, so no value can be added to it.

What’s ironic in this case is that one of the companies responsible for Blackberry’s demise is Samsung, the heavily state-integrated electronics conglomerate from South Korea. The dominance of Samsung in smartphones, like the dominance of its state-sponsored competitor LG in electronics, is not an accident of “the market”. These companies were nurtured, subsidized and finally unleashed worldwide through a conscious South Korean government effort to be on the cutting edge of high value-added, high technology, export driven growth. This approach is not unique in Asia and was pioneered by Japan with companies like Sony and Panasonic. The success of state-sponsored high tech is not lost on China, with Huawei crashing onto the international scene, selling into the router market that was once dominated by Nortel, not so long ago.

High technology, high value-added, export driven companies are more often than not the result of explicit government policy to that end. Asian countries were not satisfied with sewing clothing and assembling electronics, as Japan, South Korea and China started out doing. They wanted to control the big markets and government policies, and have allowed that to happen.

In Canada, we can also encourage high technology, high value-added, export driven growth, but it isn’t going to happen by accident. First of all, we need to understand that R&D doesn’t always have to happen within a business, and that the biggest leaps forward in products don’t come from commercial research, but from breakthroughs in basic science.  Government funding for basic scientific research has fallen out of fashion in favour of near commercial R&D. This is a mistake. Our universities should be on the cutting edge of new breakthroughs in basic science, but they need government support to do so.

On the business side, we need a sectoral strategy that prioritizes value-added, export driven companies. This needs to happen not only in high tech, but also in manufacturing, and increasingly in the processing of natural resources. A system of sectoral councils backed by a Canadian development bank could back this thrust. For more information, see Jim Stanford’s excellent Sectoral Development chapter in the Alternative Federal Budget.

David Macdonald is a Senior Economist with the CCPA. Thanks to Kayle Hatt for research help on this topic.