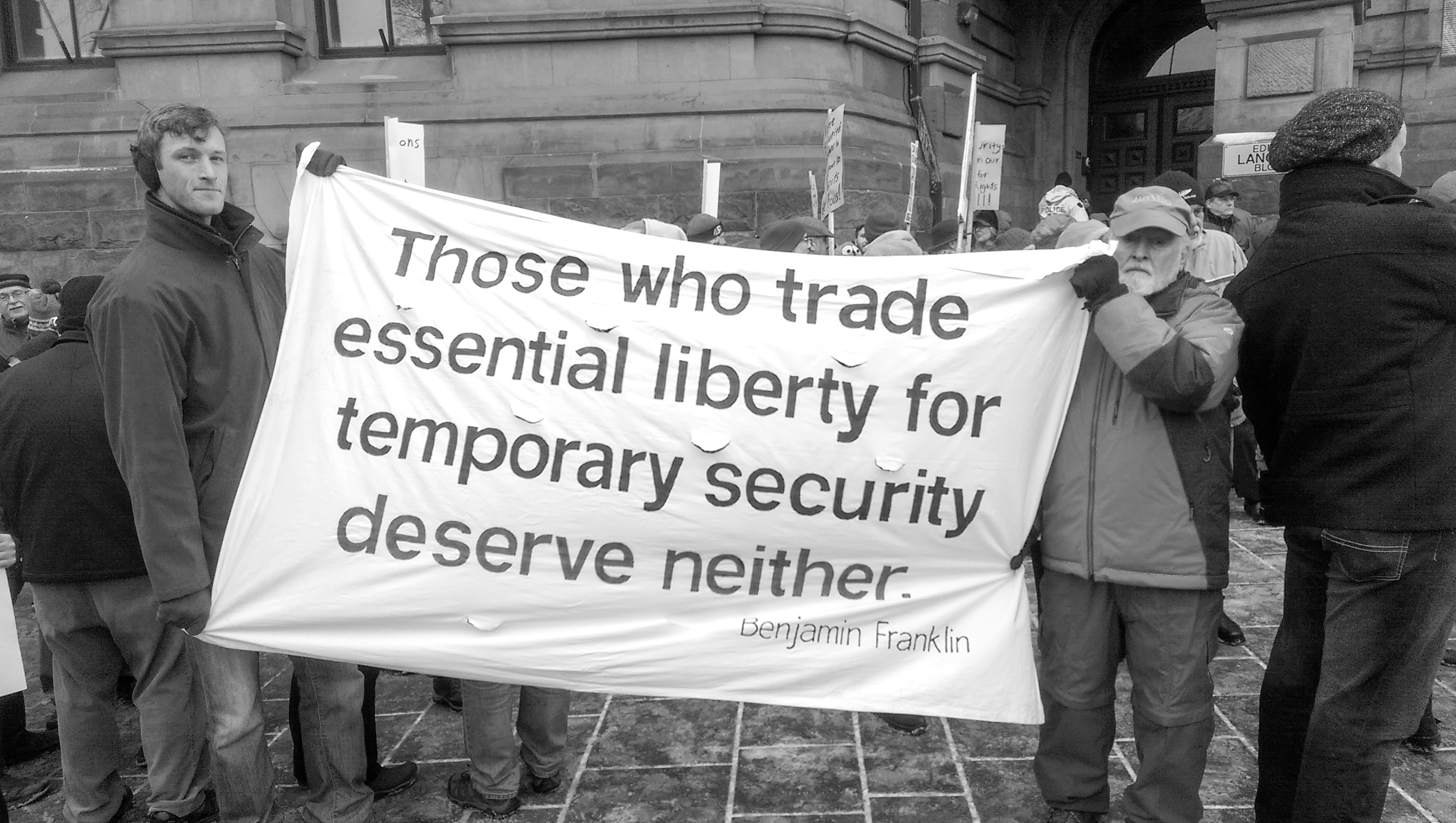 The government has stacked the public safety committee's schedule this week, hoping to get through all remaining witnesses and approve Bill C-51 before Easter. Meetings resumed last night (see CBC's good summary here) and continue today with morning and evening sessions.

As the public mood shifts against the legislation (support halved between March and February), with the Canadian Bar Association putting out the latest legal challenge (C-51 potentially puts “the entire Charter into jeopardy, undermines the rule of law, and goes against the fundamental role of judges as the protectors of Canada’s constitutional rights"), and protests, both traditional (see image above from a March 14 rally in Ottawa) and clothing optional, increasing, the government appears to be spitballing on a desirable endgame, with Michael Chong floating a potential compromise on oversight that will likely appeal to the Liberals.

On March 17, Chong (a Conservative backbencher from Ontario) put out a statement supporting the anti-terror legislation with this caveat: "while I fully support Bill C-51, I also believe we need greater oversight of Canadian security and intelligence agencies by a parliamentary committee of elected MPs, who are directly and democratically accountable to Canadians. That greater oversight is even more important as we give these agencies new powers to combat terrorism. It is also why the Senate should pass the Reform Act, to ensure that parliamentary committees can carry out their oversight function free of the control of party leaders and the Prime Minister’s office."

Chong's Reform Act, which would give MPs more power to trigger leadership reviews, suspend colleagues and select caucus chairs, passed the House of Commons in February, earning the MP praise across party lines (and some progressive activist groups) for challenging the concentration of power in the Prime Minister's Office. Though his statement on C-51 was interpreted as a similarly courageous challenge to the government line, I suspect it is, in fact, a trial balloon, signalling the government recognizes there are limits to the take-no-prisoners approach to passing legislation. (That's different from saying the government wants to make changes to C-51; it might feel, eventually, it needs to.)

"First drafts of complex legislation will not be perfect," said security expert Wesley Wark in his presentation to the SECU committee this morning. He said the role of committee, then, is to alter legislation to better reflect the Canadian social consensus, and in this case to better balance protecting people from terrorism with safeguarding individual rights. (It's doubtful the Conservative members on committee believe that is true, since they spend more time instructing witnesses where they are wrong about this legislation than listening to their concerns.)

Improving C-51, Wark proposed, would require abandoning amendments to the Criminal Code that would prohibit the promotion of terrorism, reviewing Part 5 (Immigration and Refugee Protection Act) with respect to security certificates (see the Canadian Council for Refugees for more on the issues there), and reconsidering giving CSIS new powers in Canada to disrupt potential threats when the RCMP already plays that role. Sukanya Pillay, executive director of the Canadian Civil Liberties Association, made a similar point last night when she told committee the Via Rail plot conviction proves Canadian police already have the tools they need to disrupt terrorism. (See the CCLA presentation here.)

Also on the list of witnesses this morning were Aboriginal lawyer and activist Pamela Palmater and Grand Chief Stewart Phillip of the Union of British Columbia Indian Chiefs, whose presentations largely reflected the position expressed by the AFN early on: that C-51 is unsalvageable, and that First Nations should have been consulted earlier. Palmater added that there should be a review of existing surveillance of Indigenous peoples by security agencies, a way to investigate abuse in that respect, and to redress.

She also questioned the relative importance of the terrorism threat to Canada compared to the reality of Missing and Murdered Aboriginal Women and Girls. “Where is the Bill C-51 to protect them?” she asked committee. "The bill isn't about terrorism, it's about protecting the status quo," Palmater added with respect to the broad definition of what constitutes a threat to national security in the information-sharing provisions.

If the first week of hearings leant heavily against C-51, and Canada's legal community seems to agree it goes too far, this week the committee will hear from many organizations favourable to the legislation—"the threat of terrorism is real" was a common refrain Monday evening; we need to cut off "the head of the snake" was a distant runner up with only two mentions—as well as current and former police officers who support new information sharing and preventative detention powers.

The testimony from Louise Vincent, sister of the soldier who was run over and killed by Martin Couture-Rouleau last fall, added emotional bite to the government's position. "Patrice Vincent must not have died in vain," she said. "We need this (Bill C-51)." The Conservative Party is also responding to criticism of the terror bill by appealing to members to help “prevent the spread of radical jihad" in Canada, according to The Hill Times today.

C-51 will probably be a footnote to the ISIL mission extension announced today by the Prime Minister himself, as it was during the odd niqab and guns debates of the past two weeks. But tonight's presentation from retired Supreme Court Justice John Major should be good. The hearings resume at 8:30 p.m. ET on the ParlVu website.