Ontario PC Leader Doug Ford has proposed a $2.8-billion “middle class tax cut,” despite the fact the province is facing a deficit.

Promoting tax cuts as “middle class tax cuts” is the latest fad in election-time politics. Prime Minister Justin Trudeau promised to cut middle class taxes in the 2015 election, but when we crunched the numbers, it turned out it was more of a tax cut for the rich than the middle class.

So what of Ford’s promise of middle class tax cuts for Ontario? It is anything but.

By 2020, when the tax cut would come into effect, changes to Ontario’s middle tax bracket would affect anyone with taxable income between $44,788 and $88,924. Currently, Ontarians in that income range pay 9.15 per cent in provincial income taxes. Doug Ford is promising to cut that down to 7.32 per cent, starting in year three of the next government’s mandate.

We ran this proposal through Statistics Canada’s SPSD/M model to determine the distributional impact on anyone 18 or older. Short take: higher income earners stand to gain the most from this tax cut. 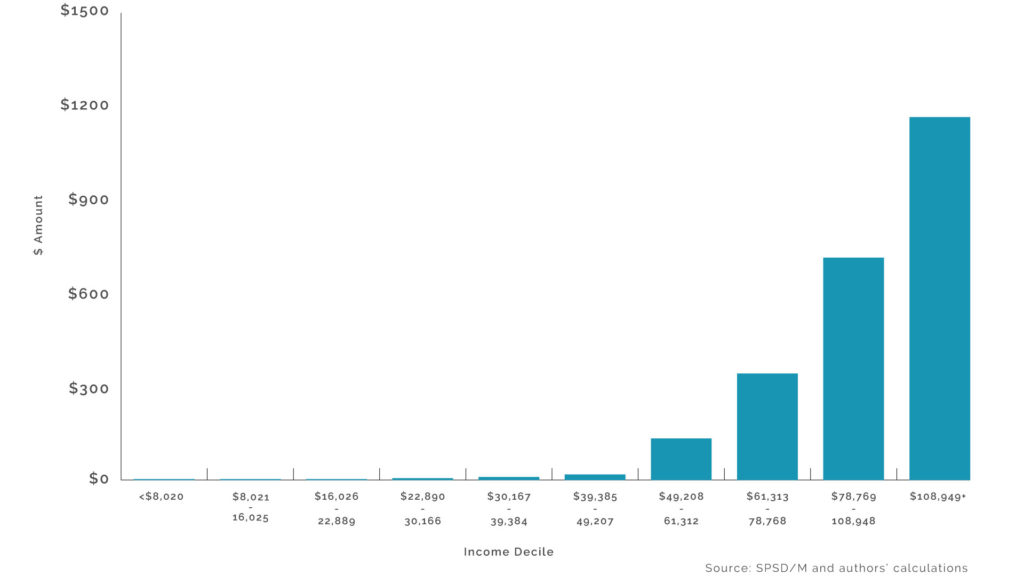 What this chart shows is that, under this proposal, the bottom 60 per cent of Ontario earners (those who earn less than $49,208) would receive, on average, just seven bucks in tax cuts.

But the real winners are the richest 10 per cent of Ontario income earners: they would get an average of $1,168 in additional tax cuts.

The policy change the PCs are advancing would not benefit anyone with taxable income of less than $44,788.

It would provide a larger benefit to those with taxable income of $88,924 or more. This is because even if your income is above $88,924, you are receiving a tax cut on the income you make between $44,788 and $88,924 (above that income level, the additional income is taxed at a higher rate). However, it will provide the most benefit for high income Ontarians who pay surtaxes, with taxable incomes about $90,000 or more. This is because the additional surtaxes that they pay are based on their Ontario tax payable. The reduction on their Ontario tax payable reduces their surtaxes as well.

Chart 2 shows the percentage of the proposed 2.8-billion tax cut that will go to each income decile (2020). 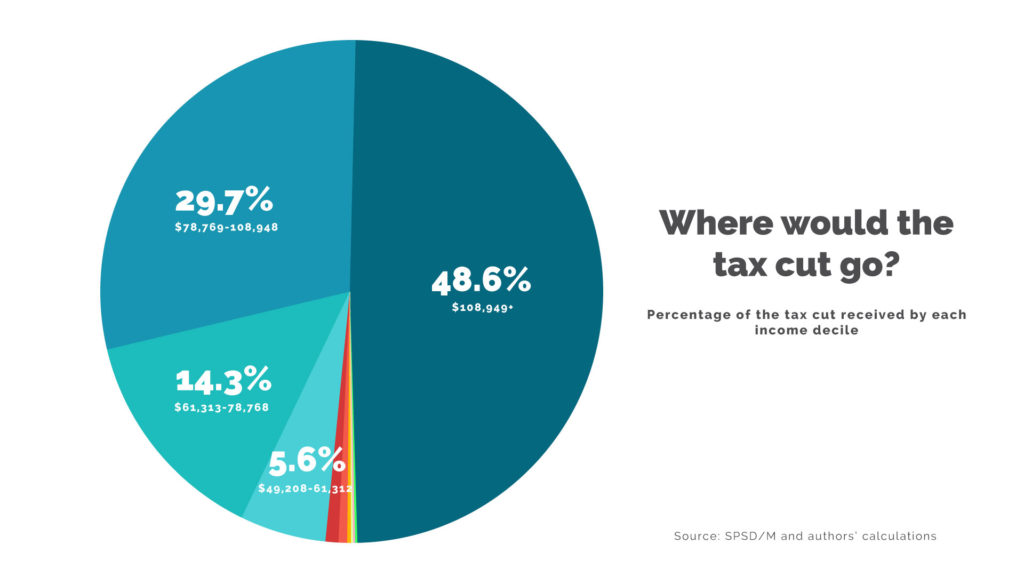 So, are middle class tax cuts a false hope? In this case, partly. The lion’s share of the gains would accrue to the richest 10 per cent.

This analysis is based on Statistics Canada’s Social Policy Simulation Database Model 26.0. The assumptions and calculations underlying the simulation results were prepared by David Macdonald and the responsibility for the use and interpretation of these data is entirely that of the authors.

In an attempt to be consistent, we used the 2017 tax system in our comparative analysis. We used the 2020 tax year since that’s the year the proposal would kick in, according to the PC party backgrounder.

Author's note: We are monitoring major proposals from all of the parties in the lead up to the June 7 election, analyzing their implications for income inequality, decent work, public services, climate change, and ensuring a just transition that works for all. The PC party is the only party in this election offering personal income tax cuts.