Today we’re releasing the 22nd annual Alternative Federal Budget (AFB). The 2017 Alternative Budget includes 22 subject chapters and was put together with input from 85 economists and public policy experts from dozens of civil society organizations that represent millions of Canadians. It is based on a rigorous economic and fiscal framework that has gained an enviable reputation.

In 2017, the stakes are high and the choices are clear. Canadians simply can’t afford a “go slow”, “wait and see”, or “status quo” budget.

It's time to deliver on promises made and to invest in reducing inequality and driving inclusive growth. We’ve seen what happens if this challenge is not met, so far in the form of Trump and Brexit. It seemed improbable until it wasn’t.

Budgets are about choices—some of the most important choices that any government can make. With this budget, our federal government has a responsibility to do everything within its power to avoid this path. This budget is the time to deal with real and important challenges and to head off these worst case scenarios. High stakes must be met with clear choices.

Minister Morneau, we’ve done the math, we know what is possible, Canadians know what is needed and they deserve to see action.

Addressing the reality that Canadian families are falling behind is not a one year project.  It will involve many years of fixing the tax system, improving employment prospects, driving wage growth and investing in public services. Last year’s federal budget made important steps on several of these fronts, in a few cases borrowing from prior alternative budgets, but the task is far from over.

Despite working harder, too many Canadians have been left out of the economic growth that has gone to profits over wages, and to CEOs over workers. There is a hunger for governments to take bold action to help those feeling left behind. If governments don’t act now, voters could turn to the politics of division, as we’ve seen elsewhere. Unfortunately, initial reports suggest that this is exactly what's going to happen, that the government is taking a-wait-and-see approach to the budget—looking across the border instead of addressing issues that exist right here at home.

The Alternative Budget works as an incubator for progressive policy ideas, building and refining them until they are ready for implementation. It lays out bold next steps for the federal government so it can address the fundamental issues affecting Canadians.

Unlike the federal government, our budget shows exactly who it benefits. In terms of incomes, the lowest third of Canadian families would see an average increase in transfers of $1,800 a year. Middle class Canadians would see little change in direct taxes and transfers but would see on average $1000 improvement in public services through free tuition and better long term care. The upper middle class would pay more in taxes but that would be offset by better services, particularly in health care, a trade Canadians repeatedly say they are willing to make. The biggest tax increase would be for the richest 5% of families, while those increases would be partially offset by improvements to services, in the end they will pay more. 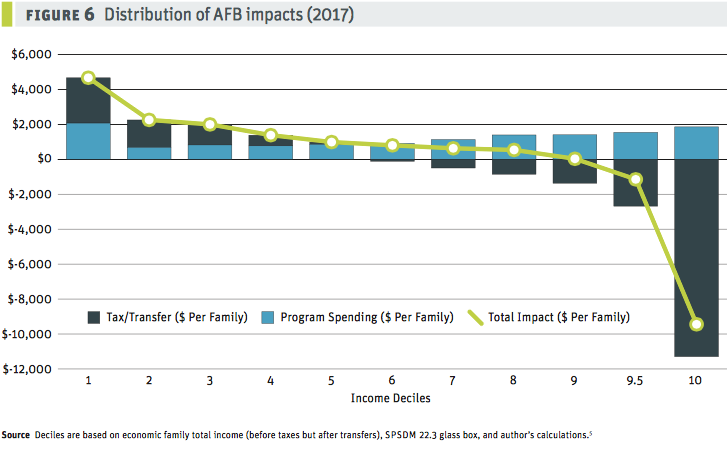 This year’s federal budget has promised a gender-based analysis—something this year's Alternative Budget has a template for. We’ve calculated that our new transfers are roughly of equal benefit to both genders. However, our closure of tax loopholes will be mostly paid by the men who disproportionately benefit from them.

In fact, the cancellation of unequal tax breaks is a major focus of the 2017 Alternative Budget and builds on our earlier work, showing that federal tax breaks give 40% of their benefit to the richest 10% of Canadians at an incredible cost of $103 billion a year. Our budget ensures that stock traders and real estate flippers don’t pay half the tax rate of the janitors sweeping their floors. We make sure that those paid in stock options instead of salaries don’t get 50% off their tax bill and that corporate boxes at sporting events aren’t paid for by tax breaks.

Federal budgets should be about more than improving programs, they should also be about directing the Canadian economy. The weak growth that has been a persistent feature of the Canadian economy is a choice not an economic necessity. Our Alternative Budget pushes growth up aggressively, and it does so based on better public services, good jobs and improved opportunity.

Canada’s job market continues to scrape along with no improvement since the 2009 recession. The hallmark of our plan is the creation of nearly half a million jobs that provide substantial new opportunities.

The Alternative Budget maintains federal spending, revenues and deficits at the lower end of their historical ranges. The debt-to-GDP ratio remains stable at a 32% of GDP despite having a $43 billion deficit in the first year, as that deficit is offset by a $43 billion surplus in the household and private sector driving stronger GDP growth.

The stakes are high with Canadians increasingly left out of economic growth and looking to the federal government for help. But waiting to match American corporate tax cuts will only lead to further disillusionment. We provide clear choices for a more progressive budget.

Economists and financial institutions around the world have recognized the detrimental effects of inequality. Working Canadians feel like they are falling into the growing gap between rich and poor. We need to make sure economic growth is filling that gap before the pothole turns into a sinkhole.

This year’s Alternative Budget demonstrates that the money and tools are there to transform Canada’s economy so that it works for everyone.

Whether they are pouring coffee or cleaning hotel rooms, precarious and part time workers need support from the systems they pay into. By lowering the eligibility requirement for employment insurance, our plan would protect an additional 250,000 workers from downturns in the economy.

Low income households would benefit from a GST top up that would return an additional $1800 a year to those who need it most.

Young workers would receive support through the creation of paid internships and greater access to apprenticeships.

Women now make up 47% of Canada's labour force. We need job creation strategies that don't leave half the population behind. Our budget would invest in the sectors where women work with boosts to the care economy and a living wage for home care and childcare workers.

Investments in Farm Credit Canada will allow a new generation of farmers to continue their work without unmanageable debt loads.

You don't have to live in downtown Toronto to know that we are facing a crisis in affordable housing. The Alternative Budget would ensure the federal government helps shoulder the burden of the rising cost of living by building 10,000 new units of affordable housing each year.

Provinces shouldn't have to choose between mending broken bones and healing minds. Our budget demonstrates that we can afford to provide high quality health care and expand our system to include mental health care.

Doctors orders mean nothing if you can't afford to fill a prescription. Our budget would introduce a national pharmacare program that would allow more than 3.5 million Canadians to fill prescriptions that they can't afford today.

Our plan would eliminate tuition for post secondary education. The result: parents would no longer need to trade in their own financial security to provide for their children’s education. New graduates would no longer enter the workforce with unmanageable debt. The 10,000 First Nations students on waiting lists for post-secondary education funding would be able to start school.

We can't afford to wait until Vancouver is underwater before we act on climate change.

The Alternative Budget would implement a more ambitious carbon tax that would deliver on the promises our government made in Paris. Our budget would send that money right back to low-income households, and to workers impacted by the shift to a greener economy. It would invest in making existing industries more sustainable, and in supporting new industries, creating green-collar jobs and ensuring a just transition for workers and their communities.

The bottom 90% of families will be better off under our plan. Our budget will lift one million Canadians out of poverty, reducing the overall poverty rate from 12% to 9%. Women would see greater benefits from income transfers targeted to low-income earners. Senior women would see their poverty rate decline by nearly 7% points.

Our country is diverse and the challenges we face are complex.

The solutions to our problems don’t fit in a tweet.

However, a more equal and sustainable society, a more shared prosperity, is within our reach.

For the full Alternative Federal Budget 2017 (available in English and French) and related infographics, visit www.policyalternatives.ca/afb2017.