The following remarks are excerpted from the 2015 Alternative Federal Budget press conference on March 19, 2015 on Parliament Hill, featuring David Macdonald and Kate McInturff. 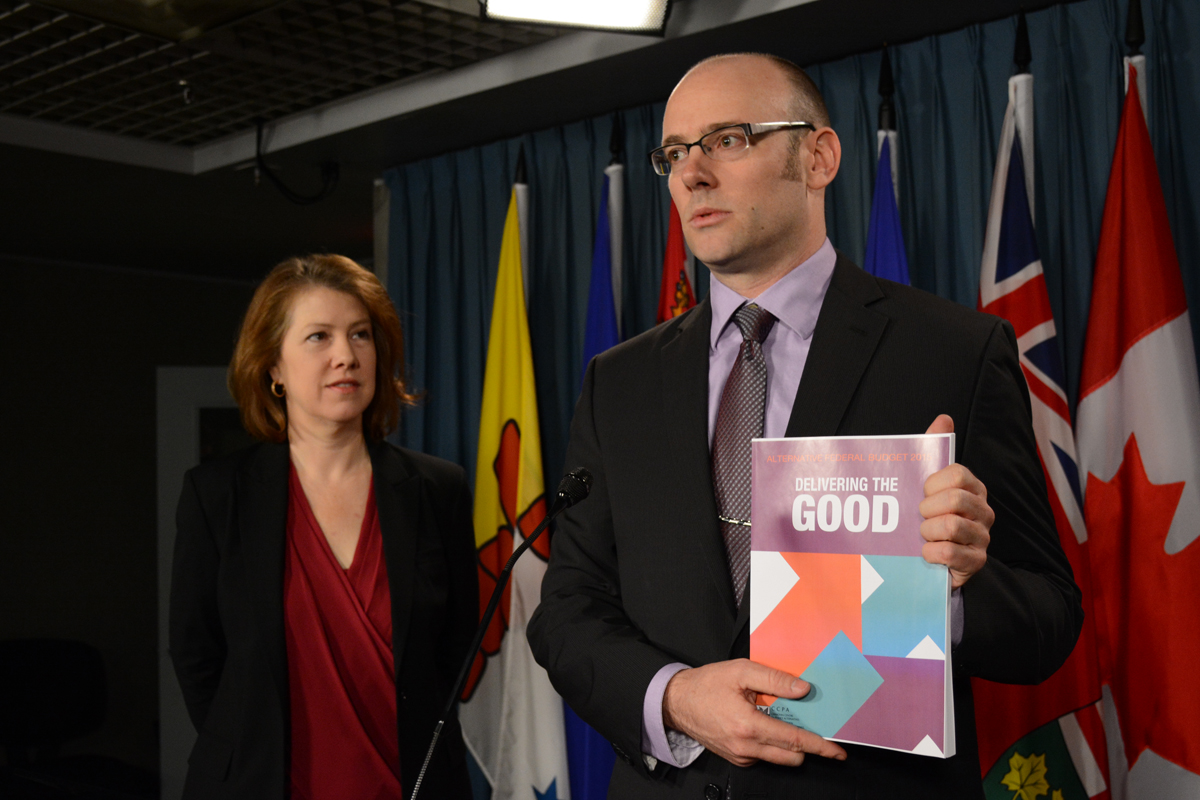 This year is the 20th anniversary of the Alternative Federal Budget. Our first was in 1995. Over the years, we’ve proposed policies that have been successfully implemented, like the creation of a Parliamentary Budget Officer. Other ideas, like affordable childcare, we continue to advocate for.

For each of our last 20 budgets we have developed a rigorous economic and fiscal framework that’s acquired an enviable reputation nationally and internationally.

In the lead up to a federal election the Alternative Federal Budget lays out a benchmark for what’s possible in federal policy. Budgets are not technical financial documents, instead, they are the product of values and contain some of the most important choices that governments make.

The dramatic fall in oil prices since the summer has vastly altered Canada’s fortunes. Alberta will likely be in recession next year with knock on effects in Newfoundland, Saskatchewan and British Columbia. Canada has been rudely reminded that every boom ends in a bust.

Canada’s employment rate has remained essentially unchanged since the summer of 2009, meaning that almost the entire decline in the unemployment rate since the recession has been due to Canadians giving up looking for a job instead of finding one. The jobs that returned have been precarious and part-time.

Our fiscal base case, including the fall in oil prices, now projects nominal GDP growth of only 2.1% for the coming fiscal year. This will be by far the worst performance since the 2009 recession. We are not yet in recession territory but we are dangerously close.

Today we are projecting the complete loss of the $2 billion surplus and $3 billion contingency fund for next year. Given what we know today, next year’s federal budget will be in deficit. 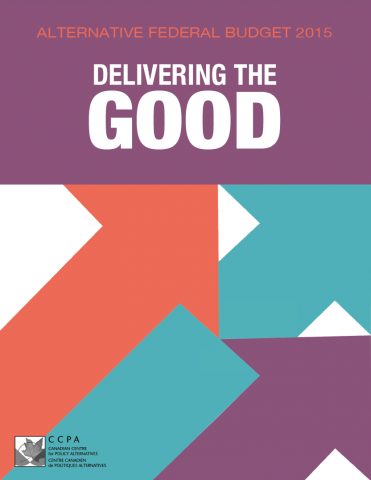 We are releasing our alternative budget today because the federal government should not be “missing in action” with such dangerous winds blowing. What are we waiting for? Delaying and praying for higher oil prices is not a plan. Now is the time for a real plan, an alternative plan, for offsetting the collapse of capital investment in the tar sands.

In the short term, our alternative budget runs bigger deficits than the federal government to stimulate the economy, like we did in 2009. In the long term, we propose a sectoral strategy that doesn’t rely so heavily on our natural resources and the environmental and economic harms that that entails.

Our budget is built for growth, through sensible measures we induce $36 billion in additional economic activity to offset the projected weak growth next year. However, because we target higher growth and employment we do not increase the federal debt ratio.

Our sophisticated inequality analysis shows that we would lift one in four children out of poverty and reduce the share of seniors living in poverty by 43%. Seven out of ten Canadians would see a net benefit. The wealthiest Canadians would see a mere 3% increase in their taxes. All Canadians would benefit from collective investments in health care, pharmacare, more affordable tuition and increased access to services.

We hope that provincial and federal governments will take up this cutting edge inequality analysis and make it standard practice for future budgeting.

A zero on the balance sheet is easy to understand but hard to live with.

The federal fiscal balance has been achieved by leaving Canadians to fend for themselves. The high cost of these policies include: leaving 10 million EI calls unanswered as employment rates stagnate, cutting one in four Veterans Affairs staff while embarking on a new military venture, ignoring the lessons of the listeriosis outbreak by cutting one in five workers at the Canadian Food Inspection Agency, and leaving the regulators that guarantee rail safety dangerously underfunded in the lead up to the catastrophic rail accident in Lac-Megantic. The Alternative Federal Budget provides a fully-costed alternative to these economic policies.

Our budget does this by ensuring that our programs are targeted at those who need them and cutting boutique tax loopholes for the high-income earners who don’t. Tax loopholes like income splitting.

The new federal income splitting program costs $2 billion annually, provides no benefit to 85% of families. It primarily benefits families making over $200,000 a year—providing choices for those who already have them.

The AFB would spend that money instead on increasing access to childcare. There are currently a million children under the age of five who live in households with two working parents. Yet we have only half a million regulated day care spaces for those children. Neither income splitting nor a check for $160 a month is going to ensure that those half million children have a safe place to go while their parents are at work.

Our budget returns the corporate tax rate to its 2006 level and concentrates on rewarding companies that are actually investing in Canada. In addition, we stop providing massive tax breaks to companies through the capital gains deduction. These changes will provide an additional $9 billion a year.

The AFB would use that $9 billion to fund a national pharmacare program, a major investment in rebuilding aging community infrastructure across Canada, increasing the availability of affordable housing and providing clean drinking water for the over 100 First Nations communities who live without it.

Corporate meals and entertainment ex­pense deductions currently cost the federal government $400 million annually. The AFB would spend that money on a national action plan to end violence against women.

The AFB would replace subsidies to the extractive sector with investments in Canada’s public land and water. The AFB invests in incentives for innovation and research in the energy sector by using proceeds from a $30 a tonne carbon tax, an environmental policy whose time has come.

Canadians need more than a zero. They need safe food, clean water, and affordable housing. The Alternative Federal Budget demonstrates that we can afford to meet those needs and deliver the good for all Canadians.