In 1995, Canada made historic commitments to implement gender equality in all policies, programs, and laws when it adopted the Beijing Declaration and Platform for Action. That same year saw the adoption in Canada of The Federal Plan for Gender Equality to secure gender equality in all aspects of social, political, legal, and economic life in Canada.

A new Parkland Institute report demonstrates that women in Alberta, who were early leaders in moving toward greater sex equality, had already begun losing ground relative to men for some years by the time these commitments were made in the mid-1990s.

In fact, the gender wage gap in Alberta is the largest in Canada. Women’s average total income in Alberta is just 58% of men’s, and women’s full-time, full-year earnings are dramatically lower in Alberta than in other provinces at only 63% of men’s (compared to 80% in Saskatchewan, 75% in Québec, and 74% in Ontario). 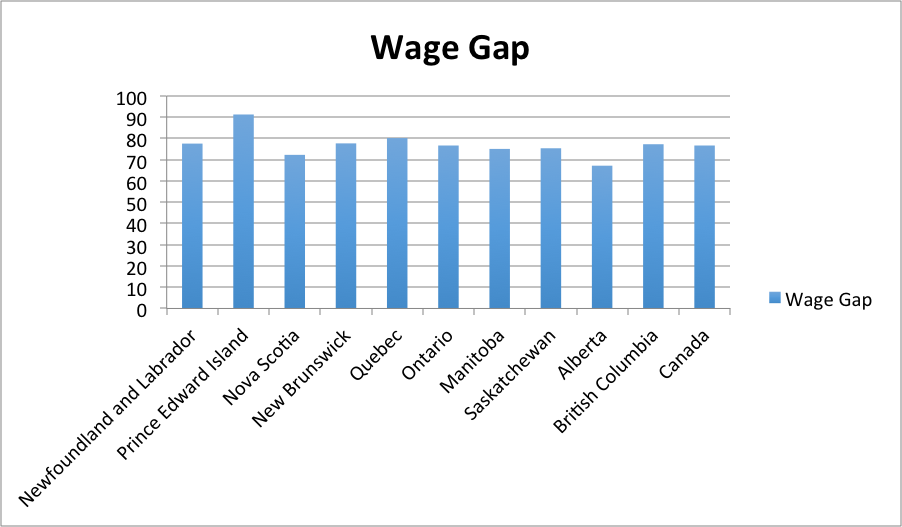 Women in Alberta perform an average of 35 hours of unpaid work each week – a disproportionate responsibility both compared to men in Alberta (17 hours) and to women in other provinces (Québec 26 hours, Ontario 32 hours; the national average is 32 hours). This unpaid work burden compels many women in Alberta to seek part-time, flexible work arrangements, and a lack of affordable childcare spaces in the province is an additional barrier to women’s participation in the paid workforce.

A shift in taxation policy at both the federal and provincial levels from “taxing for equity” to “taxing for growth” began in the late 1980s. A series of cuts and other changes to taxation resulted in a flattening of the progressive system of taxes in Canada, and shifted the tax burden to those who could least afford to pay: at both the federal and provincial levels, low-income taxpayers experienced significantly large tax increases, while high-income taxpayers received tax cuts.

The Alberta government restructured its entire tax regime beginning in 2000, replacing graduated personal and corporate income taxes with a single 10% rate for all but small business corporations. This policy of “detaxation” – a type of tax cut designed to permanently restructure the provincial revenue system – made the provincial treasury more dependent on volatile non-renewable resource revenues.

Detaxation in Alberta has especially adversely affected women, shifting disproportionate amounts of the province’s annual tax share to women and low-income men in order to fund tax breaks for corporations and high income individuals (see chart below). In the process Alberta has significantly reduced the level of progressivity in its taxation system, and as a result, women in Alberta have continued to lose economic ground to men. 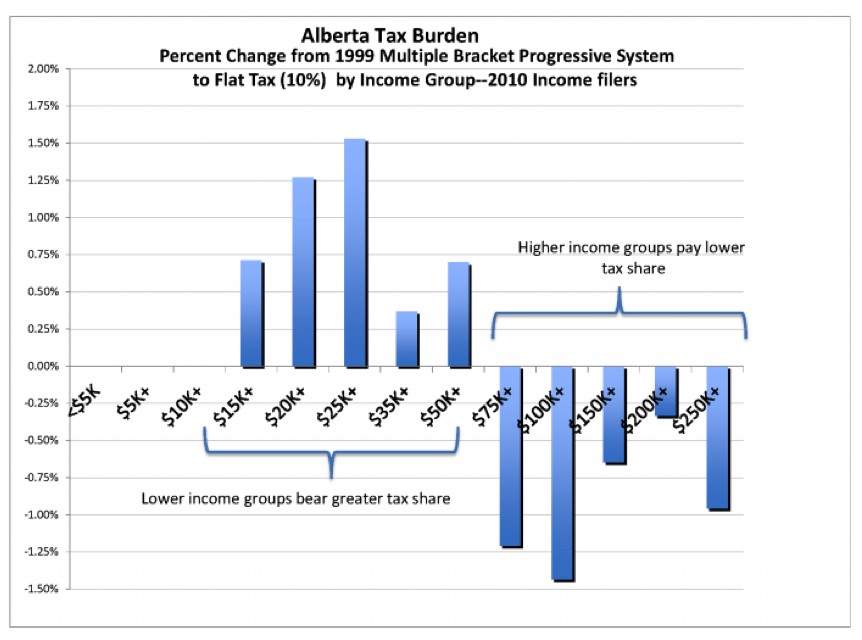 There are numerous alternative tax systems that could be implemented – especially in light of the current budgetary concerns resulting from the low price of oil – to reverse these trends and bring greater progressivity and gender equity to the tax system in Alberta.

Cuts in corporate income tax rates to 10% for general businesses and 3% for small businesses have resulted in a loss of provincial revenue from corporate taxation of over $28 billion since 2001. Because of the corporate ownership structure in Alberta, the benefits of these corporate tax cuts have disproportionately benefited men in Alberta. Increasing the corporate tax rate would add $1 billion in revenue for each percentage point increase, and would provide the resources necessary to implement programs which could begin to reverse the deterioration of women’s economic position in Alberta.

The option of increased sales, commodity, and services taxes would exacerbate the inequities of the Alberta taxation system because these taxes are all regressive in varying degrees, and are less gender equitable than other available options. In a province that has seen the economic status of women deteriorate more severely than in any other jurisdiction in the country, the introducing a new provincial sales tax would be a step in the wrong direction.

The budgetary reliance on the ongoing sale of non-renewable resource assets to compensate for the lack of adequate provincial tax revenues has left crucial social programs underfunded and vulnerable to market swings in volatile oil prices.

There are alternatives that have the potential to stabilize annual provincial revenues and to reverse the trend of greater gender inequality in Alberta, including the addition of new multi-bracket graduated personal income tax rates, enhancing low-income supports for women’s paid work, increasing corporate tax rates for general business corporations, increasing resource royalty rates, use of the Alberta Heritage Savings Trust Fund to collect and manage non-renewable resource revenues, and the establishment of an effective provincial ministry charged with eliminating all forms of gender discrimination in Alberta. These changes could add as much as $1.6 billion in annual revenues to provincial coffers at a time when the province is in need of revenue to fill the gap left by declining oil prices.

Kathleen Lahey is Professor and Queen's National Scholar in the Faculty of Law at Queen's University, specializing in issues concerning women and taxation, gender analysis, and poverty.

Ian Hussey is Research Manager at the Parkland Institute, an Alberta-wide, non-partisan research centre situated within the Faculty of Arts at the University of Alberta.