A Paycheck is Not a Lifestyle Choice 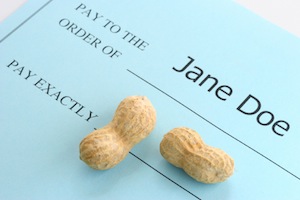 Allow me to woman-splain some things about the wage gap.

What is the wage gap? When two people have the same job, work the same hours and make different amounts of money that is a wage gap. In Canada, women working full-time earn between 20-23% less than their male colleagues.[i] Pay equity refers to situations where two people perform different tasks that are of comparable value and receive different levels of pay.

No. Out of the 500 different occupations tracked by the 2011 National Household Survey, there are 31 occupations in which women (working full-time, full year) make more than their male peers. Those women represent 2.7% of all women employed in full-time work. For the other 97.3% of women working full time, it still sucks to be you on payday.

Aren’t things better now than they used to be?

Marginally. Over the past twenty years the pay gap for full-time work has narrowed by 5%. If the wage gap continues to narrow at this pace, women in Canada can look forward to earning as much as men in another 94 years. (Sorry class of 2014.)

Why not let the market decide?

Rising economic tides do not lift all boats. When an economy grows, wages do not necessarily grow at an equal rate for women and men. This is especially true when economic growth is driven by industries that predominantly employ men. Women in Alberta earn more than women in any other province in Canada, but they also experience the largest pay gap – taking a 33% haircut on full-time wages, compared to men. The wage gap is smallest in the province where women (and men) make among the lowest wages in the country—in PEI.

Hoping that another economic depression lowers men’s wages enough to close the gap doesn’t seem like a great idea. Pro-active monitoring and enforcement mechanisms are essential to ensuring that economic growth benefits women and men equally. Without that intervention, equality starts to look more like a race to the bottom.

What about the children?

In Canada, the majority of women with children under five are working women. Just like the majority of men with young children are working men. Women with young children are more likely to work when their spouse works. They are more likely to work full-time when their spouses work. For whatever reason, the male breadwinner model—where Dad goes out to work and makes the big paycheck and Mom stays home to take care of the kids—just doesn’t describe reality. Yet the pay gap penalizes the choices that families are actually making families by discounting the work of half of all working parent.

Here’s the other thing—not all women are parents. Not all women are parents of young children. Not all mothers of young children live with the other parent. Given the persistence of the pay gap it should come as little surprise that it is precisely these groups of women—single female parents, single women, elderly women—that have the highest rates of poverty. That’s a penalty to which the pay gap contributes.

Isn’t this just a lifestyle choice that women are making?

No. Women are attending college and university in greater numbers than men. They are entering professions that were previously male-dominated—such as business, law and medicine. Yet research has shown that they make less from the first day of their professional working careers to the last. Catalyst found that female MBA graduates started their careers making $8,167 less than male MBA graduates. On day one. That’s not a failure to lean in. That’s not a choice to drop out. That’s discrimination.

The consequences are even greater for women at the lower end of the wage spectrum. Over 1.2 million women in Canada, who work full-year, full-time, still earn less than $35,000. Why is that an important number? Because that is the average cost of a ‘market basket’ of basic goods and services for a family.

Thirty per cent of all full-time female workers don’t earn enough to provide for themselves and their families (compared to 14% of men). That’s not a lifestyle choice. That’s the difference between putting food in your grocery cart and taking it out.

[i]The gap is 20% according to voluntary responses collected in the 2011 National Households Survey and 23% based on tax returns collected by the Canada Revenue Agency.