I’m not going to lie: this is click bait. What I’d really like you to do is read all 434 pages of the new CCPA book The Harper Record 2008-2015, which I co-edited with Teresa Healy, available for free download. But as this is asking quite a bit at the end of a long election, and with help from the book’s co-authors, I’ve pulled out some highlights (maybe low points is more accurate) of the Harper government from the past two Parliaments, as explored in more detail over the book’s 32 chapters.

“During the campaign that elected the first Harper government, the Conservatives made clear they would seek to maintain First Nations in poverty by breaking yet another promise of the Crown to Indigenous peoples,” writes Daniel Wilson in his chapter, Irreconcilable differences: First Nations and the Harper government’s energy superpower agenda. “That promise, made by the previous prime minister and all thirteen provincial and territorial leaders, was known as the Kelowna Accord. Less than two weeks before election day, future cabinet minister Monte Solberg described the accord as having been ‘crafted at the last minute on the back of a napkin.’ In fact, eighteen months of consultation and negotiation had gone into the agreement. Plans made during that time, notably the Accountability for Results initiative, were unceremoniously dropped.”

In place of the Kelowna Accord, the government attempted to “legislate dependence,” according to James Fitzgerald in his chapter, Truth without reconciliation. “In the six years following the historic June 2008 apology to Aboriginal peoples, the Harper government has sought to use the Aboriginal housing and water crises to assert more control over First Nations band councils and chiefs, increase their dependence on Ottawa, and further integrate private property regimes into Aboriginal communities,” he writes. “The strategy conflicts with the recommendations of both the 1996 Royal Commission and 2015 Truth and Reconciliation Commission recommendations for reorienting federal–Aboriginal relations to correct persistent social, economic and political imbalances.”

2. Taking women back to the Mad Men era

From income splitting to the Universal Child Care Benefit, one goal of the Harper government’s social programs appears to be rewarding the traditional male-breadwinning family form at the expense of programs and organizations working to eliminate Canada’s embarrassing gender imbalances—significant wage gaps included. “Such cash-for-care policies (as the UCCB) do not pay enough for caregivers to exit the labour market. They are wildly insufficient to pay for child care, and because they are presented as ‘choice’ in child care—giving parents cash to do with as they want—they discourage the creation of formal child care spaces and services,” writes Kate Bezanson in her chapter, Mad Men family policy: The Harper record on taxation and child care. “In Ontario, where the average cost of having a toddler in daycare for a month sits around $900, the federal benefit makes a marginal difference,” notes Sophie O’Manique in her chapter, Gender and austerity in post-crisis Canada. Jane Stinson, in her chapter on the reorienting of Status of Women Canada under the Harper government, “shows that business and men’s organizations have derived the greatest benefits from the dramatic change in funding [by the agency],” and that as a result of the shift, “women’s organizations and feminist perspectives have been shut out of policy development federally and have less presence and capacity to engage in making change at the provincial and local levels as well.”

Since 2008, the Harper government “massively increased the number of temporary work permits granted to employers, facilitated the undercutting of labour rights, promoted wage suppression, advanced wedge politics within the labour movement, and encouraged xenophobic and anti-immigration sentiment across the country,” writes Karl Flecker in his chapter, Welcome! (But don’t get comfortable), which describes the growth in Canada’s Temporary Foreign Worker Program and the inadequacy of recent reforms. Hadrian Mertins-Kirkwood shows how much of the growth in Canada’s migrant workforce comes from outside the TFWP—in Canada’s International Mobility Programs and free trade agreements. Generally, “economic migration” has ballooned under the Harper government while “entries to Canada in the ‘humanitarian’ category, which is predominantly made up of refugees, are down 43% since 2006.” The number of family-class immigrants “dropped by 10,000 in the first four years of the Conservative government,” writes Harsha Walia in her chapter on Canada’s managed migration policy. “As an alternative to family sponsorship, the government is lauding its new ‘quick’ super visa initiative, a temporary visa that requires the purchase of private Canadian health insurance.” A higher number of applicants come from the U.S. and Europe than Africa, Asia and the Middle East, making family reunification “a privilege for the wealthy and those from western countries, preventing thousands of low-income racialized children from meeting their grandparents.” At the other end of the pay scale, “[t]hough their labour has secured billions of dollars in profit for industry and is a major subsidy to the economy, the naming of migrant workers as ‘foreign’ or ‘temporary’ signals their non-belonging. Such terminology has little to do with how long these workers have lived and worked and built community in Canada; rather, it signals their position as permanent outsiders.”

4. An economy geared to resources

In their chapter, Leaner and meaner: Government spending from stimulus to austerity, Tamara Krawchenko and Christopher Stoney show, through an analysis of public accounts since the 2008 crisis, how funds have been drained from public services to support federal ministries most active in making Canada an “energy superpower” (see Figure 4). 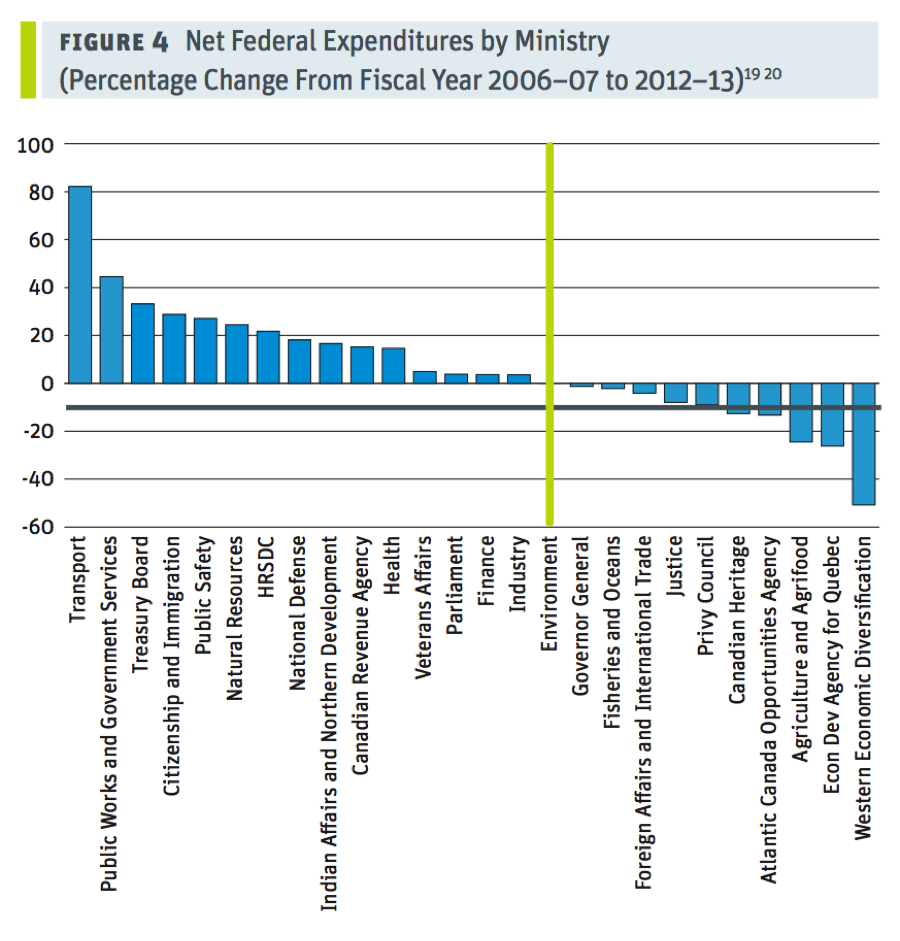 Some of that money was taken from government regulators and inspectors (e.g., in food safety, and at the Transportation Safety Board), leading to a greater likelihood of disasters like the rail explosion that occurred in the Quebec town of Lac-Mégantic in July 2013 (see Bruce Campbell’s chapter, Misplaced priorities). “According to Treasury Board data in March 2015, 25,318 positions have been cut from core public services and agencies since 2011,” writes Howie West in his chapter, Scapegoating Canada’s public sector. “Statistics Canada estimates 50,000 jobs have been cut over the same period in the broader federal public administration, while departmental spending reports show even more cuts are planned.”

The deregulation went beyond starving regulators, to the wholesale dismantling of Canada’s environmental assessment process, writes Nigel Kinney in his chapter, Burning down the house. A hasty review of the Canadian Environmental Assessment Act was shut down at the committee stage after only nine meetings, and without hearing from groups like the Canadian Environmental Law Association and West Coast Environmental Law, which participated in the original act’s implementation. “Some of the language in the committee’s recommendations for shorter and binding timelines, elimination of assessments of alternatives, substitution of provincial for federal assessments, and only requiring assessments for larger projects,” writes Kinney, was lifted verbatim from a 2012 report backed by the Canadian Association of Petroleum Producers, the Mining Association of Canada, the Canadian Energy Pipeline Association and others.

5. The assault on civil society and civil liberties

Opponents to the government’s energy superpower agenda, notably First Nations and environmental groups, have been sidelined and demonized by the government. Pearl Eliadis recounts the more than 100 cases of organizations being defunded and threatened in a process of “disenabling civil society.” In 33 cases, “[i]nflammatory and even libellous statements have served to prime the Canadian public to believe that organizations are getting what they deserve,” she writes. “The strategy, presumably, is that Canadians are more likely to support—or at least not to oppose—measures taken against groups that are perceived as anti-Canadian and will be more likely to support defunding, scrutiny, and surveillance of such groups.” Many Canada Revenue Agency audits of charitable organizations (David Suzuki Foundation, Pembina Foundation, Sierra Club Canada, Environmental Defence, Tides Canada) appear to have been triggered by their position on environmental issues, frequently after a complaint was lodged by Ethical Oil, a non-profit with links to the Conservative Party of Canada.

First Nations groups have been particularly vulnerable to government monitoring and surveillance, which is why they were (and continue to be) vociferous critics of the new Anti-Terrorism Act (Bill C-51). “This highly controversial omnibus security bill was introduced in Parliament in January 2015 and became law, with almost no amendments, in June,” writes Monia Mazigh in her chapter, More secure, but not safer: A review of national security policy from 2008 to the present. “The bill substantially increases the powers of CSIS to engage in secret, judicially approved counter-terrorism actions within and outside of Canada, going as far as to allow CSIS to apply before a judge to approve violations of the Charter of Rights and Freedoms in the pursuit of its covert objectives.” Terrorism was only one of nine enumerated activities that fit the definition of a threat to the country, including the “economic or financial stability of Canada,” under the bill’s information sharing provisions. “Environmental groups and Indigenous peoples rightly worry that protests against provincial or federal energy policies (e.g., oil and gas pipelines) may lead to terrorism files being opened on well-meaning activists.”

This is barely a fraction of what you’ll read about in The Harper Record 2008-2015, downloadable in full and as individual chapters on the CCPA website. The book, which builds on the 2008 collection The Harper Record, continues a 25-year tradition at the CCPA of periodically examining the records of Canadian federal governments during their tenure. Regardless of the election outcome, in detailing what the Conservative government achieved over these last two Parliaments, Teresa and I (and the CCPA) hope the book’s contents will continue to be relevant to policy-makers, activists, historians, journalists and the public for many years to come.

Stuart Trew is the editor of The Monitor, the CCPA’s national magazine, and a co-editor (with Teresa Healy) of The Harper Record 2008-2015. Follow Stuart on Twitter @StuJT.