3.2 million people and you still can’t see us 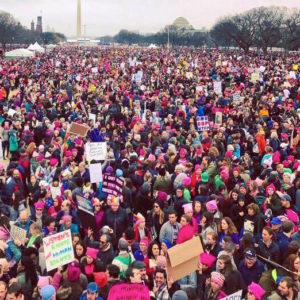 An estimated 3.2 million people turned out for Women’s Marches around the world on Saturday. The sea of protesters had barely arrived on the Washington Mall before the questions started: “Where will this protest movement go? Do they have a plan? Is this just a one-off event?”

3.2 million people show up in public, in hot pink for goodness sake, and folks still can’t see the women’s movement.

Male commentators were quick to dismiss the march to the trash heap of ineffective political history. Typical responses include New York Times commentator David Brooks’ assessment that: “Without the discipline of party politics, social movements devolve into mere feeling” and, horrors, “identity politics.”

In a really epic bit of mansplaining, Guardian commentator Micah White lectures protesters that they are destined to be no more than “an ineffective feelgood spectacle adorned with pink pussy hats” unless they have a plan “to win elections or win wars.” Setting aside the speciousness of that choice, as if power only rested in governance institutions or armed conflict, I’m pretty sure the ladies have made some efforts to run for office. You know, like, for president. And yes, at various points in history, women have used armed violence. Oh, and feelings. Are we really going there? The ladies get too emotional?

Gentlemen, allow me to introduce you to the women’s movement. Or, I should say, movements. This is a collective of movements that have fought, over the course of centuries, for their personhood to be recognized, for freedom from slavery, against colonization, for the right to vote, to own property, to be free from violence. None of these struggles has been easy. Most are ongoing. Many are the product of an active and critical debate between and among folks – about recognizing differences in race, indigeneity, ability, sexuality, faith and gender identity. About what it means to truly include, with respect and dignity, the voices of a diversity of individuals and communities.

Perfect these movements are not. But disorganized? Lacking in long-term strategy? I don’t think so.

So what makes these commentators so quick to close their eyes to centuries of (effective, well-organized) political activity? The narrow definition of power provided by White and Brooks offer a clue. For them, power rests in the public domain.

Consider the long struggle of women to be free from sexual and domestic violence. To inhabit their own bodies, their own homes, without being beaten or raped. This violence happens, most often, in private spaces. The majority of perpetrators are known to their victims. In the case of domestic violence, intimacy is a defining element in the relationship.

How would you suggest a woman being beaten in her own home go about running for office, exactly? Are you suggesting she go out and buy a gun? Or will legislators somehow learn, by osmosis, that this crime is occurring...and, with great insight, born of what I do not know, pass legislation?

Here’s what actually happened. First, women helped save each other’s lives. Quietly. In private. Under conditions in which secrecy was key to security. Then they organized. They raised funds, formed shelters, conducted research, protested, made public these private crimes and, yes, they lobbied for better laws, better policy, more effective programs.

There is a growing body of research about what actually works to reduce rates of violence against women. I hate to break it to you, gentlemen, it is not just legislation.  According to a 30 year, multi-country, academic study, what actually works to make more effective public policy on violence against women is, wait for it, an active women’s movement. And according to a broad academic review of two decades of research and practice, published in The Lancet, what actually works to reduce rates of sexual assault is early education, working with boys and girls together—teaching mutual respect and recognition of bodily integrity and security.

Because fundamentally it is still a struggle for those who carry the identity ‘woman’ to be recognized as persons, whose bodies are not there for the use of men. Because for a woman to be able to enter the public realm—to speak, to work, to protest, to vote, to run for office—has required centuries of struggle.

When women engage in identity politics it is not because they see themselves as identical, it is because power and politics often define them as such. Just like Brooks and White looked at 3.2 million people, in all their diversity, and defined them identically: those women, so emotional, so many ‘feelings’—they just don’t understand big hard power.

We have been organizing for centuries. We have given each other a safe place to sleep, we have walked each other home at night, we have taught ourselves to read and write, we have formed unions, we have gone on strike, and, yes, gentlemen, we have run for office. If we weren’t effective, we wouldn’t be able to attend school, vote, own property, choose who we marry and divorce, or run for President.

Open your eyes, gentlemen. Open your ears. The women’s movement has defined the world you live in and will go on doing it. Whether you can see us or not.