Who will benefit from a $15 minimum wage in Nova Scotia?

There is a wave of rising minimum wages sweeping our country and, indeed, the continent. In our own country, two of our most populous provinces will raise their minimum wage to $15 by 2019. Alberta will move first in 2018, followed by Ontario in 2019. Already, Alberta's minimum wage has increased by $1.40 to $13.60, while Ontario's level has risen to $11.60.

There is mounting evidence of the benefits that a significant increase to the minimum wage brings for workers and the broader economy. In contrast, wage stagnation dampens consumer demand, while growing income inequality takes a toll on our economy and our society as a whole.

Nova Scotians deserve a raise. Today, the Nova Scotia minimum wage ($10.85 for experienced workers) is worth less than it was 40 years ago; its peak value was in 1977 ($11.14 after adjusting for inflation).

The value of the minimum wage eroded in real terms by 28% between 1975 and 2002, as it failed to keep up with inflation.

Despite increased productivity, workers have not been given their fair share—even in the best of economic times, as Dufour and Haiven documented. Between 1981 and 2006, Nova Scotia’s economic growth rate (62%) outpaced Canada’s. During this time period, Nova Scotia workers’ productivity grew by 25% while their paycheques actually shrunk. As a result, income inequality has increased.

It isn’t just minimum wage workers who deserve a raise. In 2016, 125,200 workers in Nova Scotia—that’s 32% of all workers in the province—earned $15 or less. Nova Scotia is consistently ranked as having among the lowest, if not the lowest, average wages in the country (sometimes switching places with the other Maritime provinces to come in second or third lowest).

In some respects, $15 is a symbolic number. While it certainly falls short of many of the living wages calculated in Canada and in our own province (including $19.10 for Halifax and $17.30 for Antigonish), it would still undoubtedly lift many workers out of poverty and allow them a little bit of a buffer.

Those who would benefit from a $15 minimum wage may surprise you. Statistics cannot tell us the full story of who would benefit from a significant raise in the minimum wage, they do warn against making too many assumptions about who ‘chooses’ to work at these jobs and why. This data does show that low wage workers in Nova Scotia are more likely to be women working full-time in medium to large businesses. Unfortunately, there is no data to tell us whether African Nova Scotians, First Nations, or persons with disabilities who have disproportionately high poverty rates are equally over-represented in low wage work. 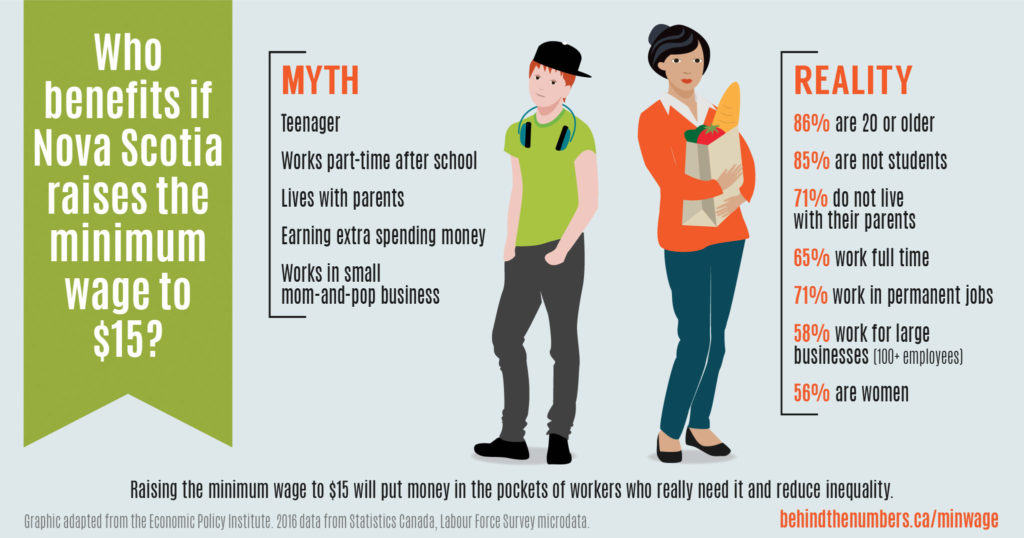 Raising the minimum wage to $15 is good for workers, and for the economy. An oft-repeated argument against raising the minimum wage is that it will only result in higher prices or job loss, and thus have no net benefit for workers. After decades of analyzing these raises, economists conclude that: “there is no instantaneous, automatic mechanism between higher labour costs and higher prices.” Further, as Brennan and Steinfield concluded in their review of minimum wage raises in Canada, there is also “no consistent evidence that minimum wage levels increase or decrease employment levels.”

Evidence shows that both prices and employment levels are overwhelmingly determined by larger macroeconomic factors, and to suggest otherwise is baseless fear-mongering.

We must not undervalue the positive impact paying people a decent wage and improved worker standards have on attributes including workers’ health, and their ability to bring their best to the workplace. We should also not underestimate the negative impacts a low wage economy has on our society including the higher health care costs that results from trapping people in precarious low-paid jobs without benefits and security.

Atlantic Canada needs a raise All the Atlantic provinces should implement a coordinated plan to increase the minimum wage to $15 by 2020.

It isn’t just Nova Scotia’s lowest paid workers who deserve a raise, it is imperative that the Atlantic region move together to raise wages. There are 320,000 workers in the region who earn $15 or less. They need to be a priority focus of public policy, both regarding wages as well as labour standards and worker protections, including paid sick leave, greater control over work scheduling, and equal pay for temporary work (all part of reforms rolling out in Ontario). Our leaders need to get on board before more Atlantic Canadians leave to attain higher wages and better working conditions elsewhere.

Do not believe the claims that higher wages will result in job losses, raise consumer prices, and do little to help low-wage workers. As we wrote 15 years ago: “claims that increases in the minimum wage will cause a contraction in the overall number of jobs are as transparently self-serving as they are dubious.”

Let’s focus on stimulating our economy from the bottom-up and take an important step toward building healthier communities together.

Christine Saulnier is the Nova Scotia Director of the Canadian Centre for Policy Alternatives.