Nova Scotia deserves a budget that invests in the public interest 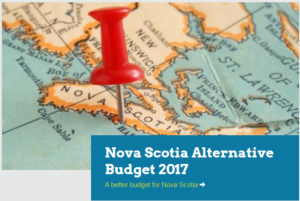 A better budget for Nova Scotians

Next week the Nova Scotia government will table its budget that is forecast to have no deficit. This is no measure of good government when it was an unnecessary goal that was achieved with serious cost and sacrifice borne by the less-advantaged, families, and working Nova Scotians, on whose back they table that 'balanced budget'.

Over one in five Nova Scotian children lives in family poverty. Welfare incomes remain thousands of dollars below the poverty line and the government is saving money on ‘special needs’ such as bus passes or small extra diet allowances cutting people off and robbing people of their dignity.

Thousands of Nova Scotians are without any place to call their own, living on the streets, coach surfing or staying in shelters. Others are in accommodations that they cannot afford, or are not safe nor adequate nor properly maintained. While still other individuals and families who are housed spend an increasing proportion of their income on rent (including heat), leaving little for food forcing more of them to go to food banks.

Undergraduate university tuition is the second highest in the country ($7,218 per year 2016/17); the average student debt owed at graduation is tied with New Brunswick for the highest in the country, with an average debt of $39,600 when graduating from a bachelor’s degree (last available data from Statistics Canada is 2010).

There are few affordable child care options for families living in Nova Scotia.

Our province has seen no net job creation to speak of and job vacancy data from Statistics Canada reveal that there are at least 8 unemployed people in Nova Scotia for every job vacancy. If we include discouraged workers, who have given up actively searching for employment, this figure would be even worse. The figure is worse in different communities with unemployment remaining stubbornly high throughout 2016 at 14.7% in Cape Breton and 10.9% in Southern Nova Scotia; and we know that these rates are higher still for Nova Scotians facing additional barriers including discriminatory ones—for people with disabilities, African Nova Scotions, and Aboriginal peoples.

Our universal health care system is being eroded. People are not able to access the primary care providers they need in their community. Ambulance fees and pharmacare premiums penalize people for their ill health.

If the government actually tables a zero deficit budget, this is only an indication that the government has failed to use its fiscal capacity to tackle the most pressing problems facing our province. The Nova Scotia Alternative Budget 2017 released yesterday exposes the extent to which the current government has been too short-sighted.

The alternative budget shows exactly how this government could have used its fiscal capacity to expand and extend universal public services, make smart, significant investments. It could have addressed some of the most pressing social, economic and environmental problems facing our province, while creating good jobs. Interest rates may never be this favourable again. Our debt to GDP ratio should be stabilized, but there is no evidence that it needs to decrease. Our debt servicing costs have declined significantly are manageable. These are the fiscal facts.

This government claimed that their approach to fiscal policy was the only way forward in the best interest of the province, and set-up government spending as a zero-sum game that pitted Nova Scotians against one another. As a result, many Nova Scotians have become cynical, especially when they hear about millions of dollars being spent on payroll rebates to enable big profitable businesses to avoid paying their fair share of taxes while their profit leaves our province.

Where are the investments in a job strategy or poverty reduction strategy or a strategy to advance the status of women or to achieve any kind of vision that would benefit more than those who are already privileged?

It isn’t the best use of our resources to spend a $100 million on an energy rebate that overwhelmingly benefits the more fortunate among us, while bringing in a carbon price that will not achieve the goals that we need it to and impose costs for those least able to change their carbon intensive energy consumption.

In contrast, the NS Alternative Budget (NSAB) introduces a carbon tax and uses the revenue to eliminate energy poverty, while creating green jobs to help Nova Scotia transition to a greener economy.

The NSAB invests in community economic development initiatives focused on food security, sustainable accessible and active transportation, and building the green economy;  This kind of investment including in worker co-operatives and social enterprises with a focus on the triple bottomline, anchors economic development to local control and decision-making, revitalizing people’s engagement in their communities.

The NSAB also invests in quality public services that Nova Scotians need.  These investments in labour-intensive, community-based occupations such as child care and early-childhood education, health care, post-secondary education, and arts and culture all create jobs with significant bang for the buck.

The NSAB’s progressive taxation and redistribution measures that also reduce poverty, direct more funds to people who spend a higher proportion of their incomes in their local communities, giving a boost to local businesses and employment.

The NSAB 2017 invests to significantly bolster the team of professionals and classroom resources required to ensure quality educational opportunities at every grade level for all students. The unnecessary labour strife with teachers put the inequities and challenges of the public education system underneath a big microscope. There is no justification for under-valuing and under-supporting the experience and expertise of these professionals.

All of us want Nova Scotia to be a better place, but some of us want that to be an inclusive vision –intentionally and explicitly—and not one that benefits only those who are already privileged.

It is not only possible, it is economically efficient, better for the environment and for a thriving democracy, to build an economy in the interests of the people, not corporations and the wealthy. There is now a mountain of evidence that neoliberalism broadly and intensifying income inequality itself is good only for a very small minority.

Building communities that are green, inclusive and thriving benefits everyone.