Women were much more significantly impacted by the layoffs and loss of hours due to the closure of non-essential businesses. The sectors of retail, food, hospitality, art and culture are mainstays for women and so they were hit hard as these sectors were forced to close. One in five working women lost their jobs or the majority of their hours between February and March. The result is that 70% of prime working job losses were suffered by women. And these women were the first to fill out applications for the new emergency benefit. Many of these women likely would not have qualified for support under the old EI rules that were abandoned as the crisis hit.

If we project forward to April, the job losses will likely continue to impact women. Unfortunately, despite the CERB providing better coverage than EI, the sheer number of women left jobless means that 731,000 or 14% of jobless women won’t get either CERB or EI support in April.

While men are actually less likely to receive support with 20% of their jobless number not eligible for EI or CERB, there are fewer men left jobless, meaning that 681,000 of them are both jobless and without benefits in April. 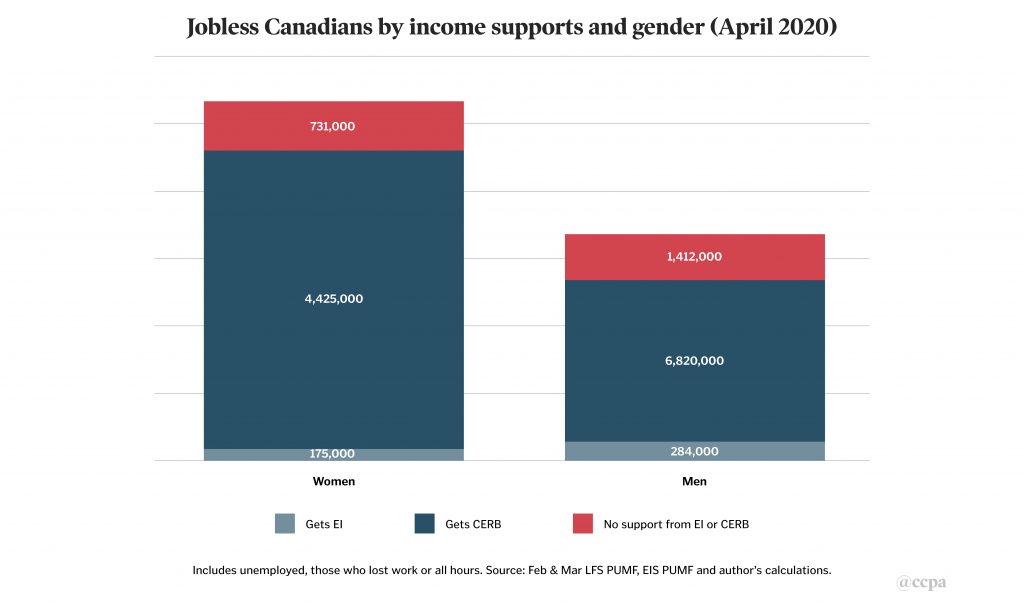 Jobless men, many of whom were unemployed prior to March 15, the start date for CERB, find themselves ineligible for support. Going into the crisis, there were over 1.2 million unemployed people: ⅔ were men and ⅓ were women. EI coverage was low with a minority of jobless Canadians being able to claim it. This provided particularly low coverage for men, as there were more of them jobless prior to CERB. As noted above, of the 20% of jobless men who won’t receive support in April, about half of their number (9%) is due to being unemployed prior to March 15th and shut out of EI. For women this reason is much less important.

Proportionally, the other detailed reasons for no support are similar between the sexes. 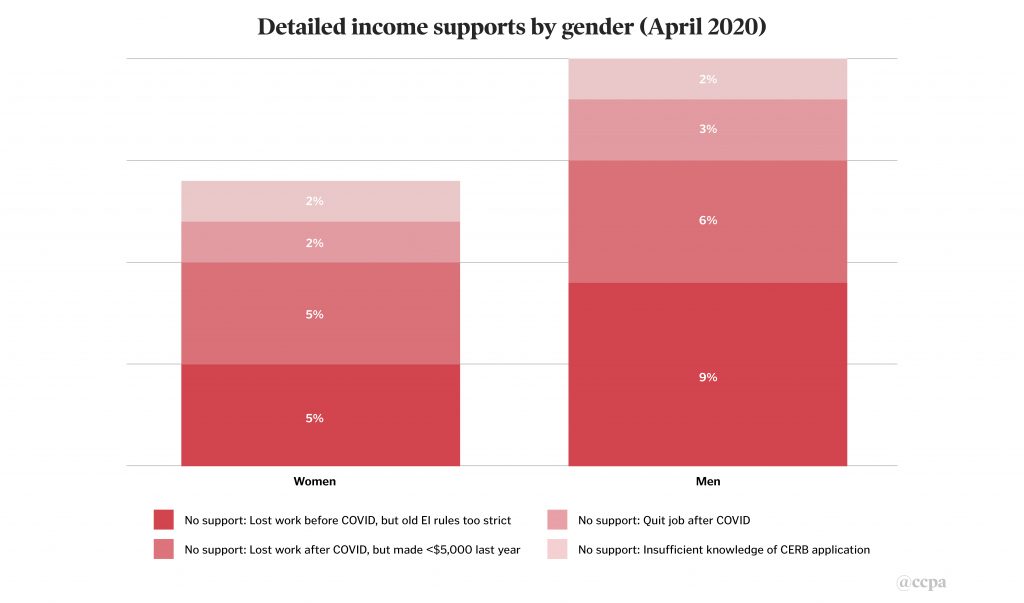 Put another way, the CERB is more modern and less restrictive than the old EI rules. As most of the unemployment as a result of  COVID-19 affected  women, they gained access to the less restrictive CERB. This left a smaller percentage behind, but due to women bearing the brunt of layoffs the number of jobless women without support was much larger. If we were ever to go back to the old EI rules, women would be disproportionately impacted as the old EI rules were far less forgiving.

The move to allow workers to make $1,000 a month and still claim the CERB captures many low wage workers. The majority of workers making under $1,000 a month are women, and they will now qualify for CERB. As of March, this means that an additional 550,000 women and 354,000 men could get the CERB. The CERB requirement that applicants must make $5,000 last year excludes roughly similar counts of men and women. Women also make up the majority of workers making between $1,000 - $2,000 a month—a group that is currently excluded from CERB eligibility.

Broadly speaking, the cracks in the new income support system are smaller for women, but there are many more women experiencing COVID-19-related job losses, resulting in higher overall numbers of women being left behind.

Here is a detailed table of how it all breaks down.

Bumpy Ride #5: Women's salaries are failing to keep up with inflation—a look at the latest numbers