What regime change means in Budget 2016

The first Liberal budget in a decade is an artful document. In some ways it does signal a profound regime change; in other ways it’s designed to signal there’s not much to get fussed about.

The biggest surprise about Budget 2016 is with respect to its plans to build growth, the much vaunted Infrastructure Fund.

Some important investments will occur in the next two years, a significant portion of which will start to address the long-overdue housing and clean water needs on First Nations reserves.

But those who thought that infrastructure spending might be ramped up at the beginning of the new government’s term, as a way of goosing sluggish growth or laying the foundation for new growth, may be surprised to learn that months of discussion and concern about a slowing economy has not changed the Liberals' original plan to back-end load infrastructure spending from their summertime platform.

In fact, the only thing that months of discussion have altered in these plans seems to be a recognition that it will be difficult to get all the money out the door in this fiscal year. So they’ve added it to the 2017- 18 fiscal year. 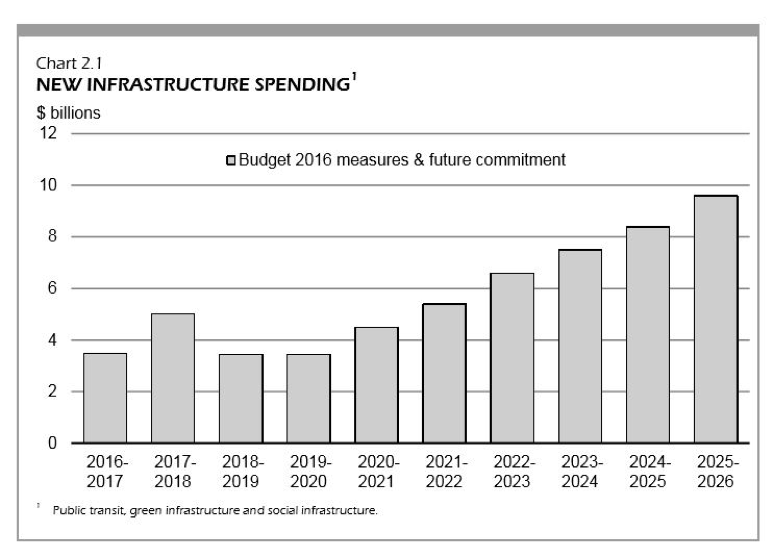 Similarly, there is just over $1 billion a year ($2.3 billion over the next two years) for all affordable housing needs in the country. About a third of that amount is, justifiably, allocated to First Nations reserves. But it simply isn’t enough. The Alternative Federal Budget estimates that the needed budget for affordable housing in Canada is approximately $2B a year, not including First Nations investments.

The Liberals recently announced an increase in the cap on immigration to over 300,000 people. Add to that the refugees, temporary foreign workers and continued internal migration from rural to urban settings.

Without question there will be more people coming to the largest urban centres in the coming years. There is a growing urgency in the need to have a plan on how to house and move people. A national immigration plan without a national housing plan and national transit plan simply downloads the costs of nation-building onto the provinces and municipalities, levels of government for which the costs of borrowing are much higher.

This is a penny-wise and pound-foolish approach. The federal debt-to-GDP ratio may fall to 30.9%, the lowest level in almost 40 years, but Canadian taxpayers in provinces and cities across the land will be saddled with far higher costs.

What we will need in the coming year is far more discussion about the appropriate role and size of the federal government, fiscally and in terms of achieving widely shared policy goals. One uncomfortable aspect of this will be the revenue conversation.

Budget 2016 promises a review of the federal tax system in the coming year, which is welcome news. In cities like Toronto, residents are facing new conversations as we acknowledge that our budgets have $22 billion in projects we say we want but for which we have no funding. Where will the revenues come from? Or should we abandon our aspirations?

One thing is for sure: there is no way we can tackle issues like population aging and climate change without a bigger federal role. That may be true of the true deficit burden we risk passing to our children--the infrastructure deficit, which defines our current and future quality of life, and capacity for growth.

Armine Yalnizyan is Senior Economist with the CCPA.  She will be in the budget lockup and following these trends.  You can follow her on Twitter @ArmineYalnizyan.