1. The May jobs report hints at a recovery in employment around the corner but, as feared, job creation among women is lagging men by more than two to one. Women accounted for only 29% of the recovery in COVID-19-related job losses and absences posted in May.

The boost in female employment (+1.1% or 84,000) is modest to say the least. Taking these gains into account, cumulative job loss among women now stands 1.5 million and another 1.2 million have lost the majority of their hours of employment. These losses are impacting more than one-quarter of all female workers (28%) in industrial sectors across the economy. 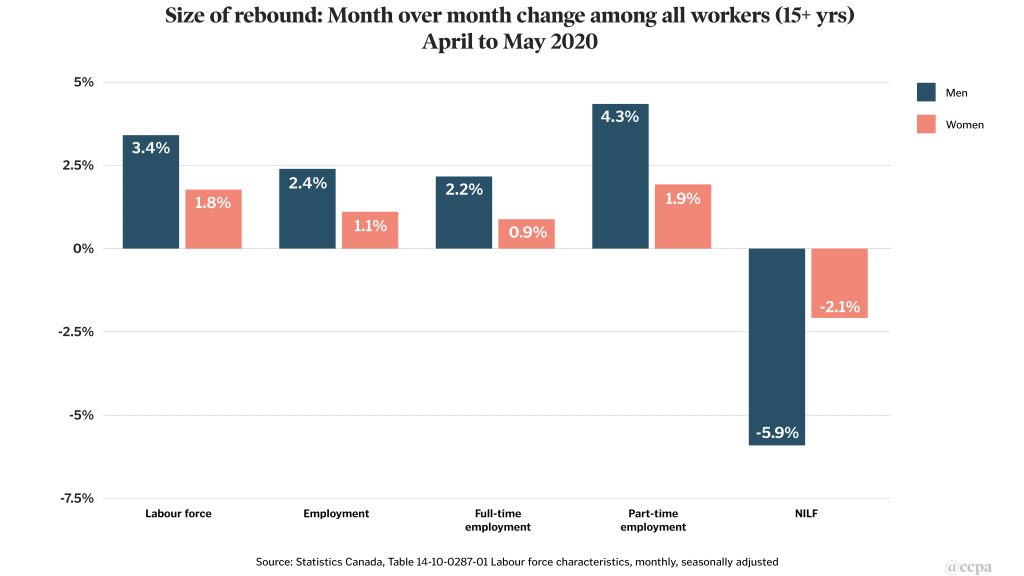 2. Women made up half of the paid labour force in February, but over half of job losses posted between February and April, and just one-third of employment gains in May. 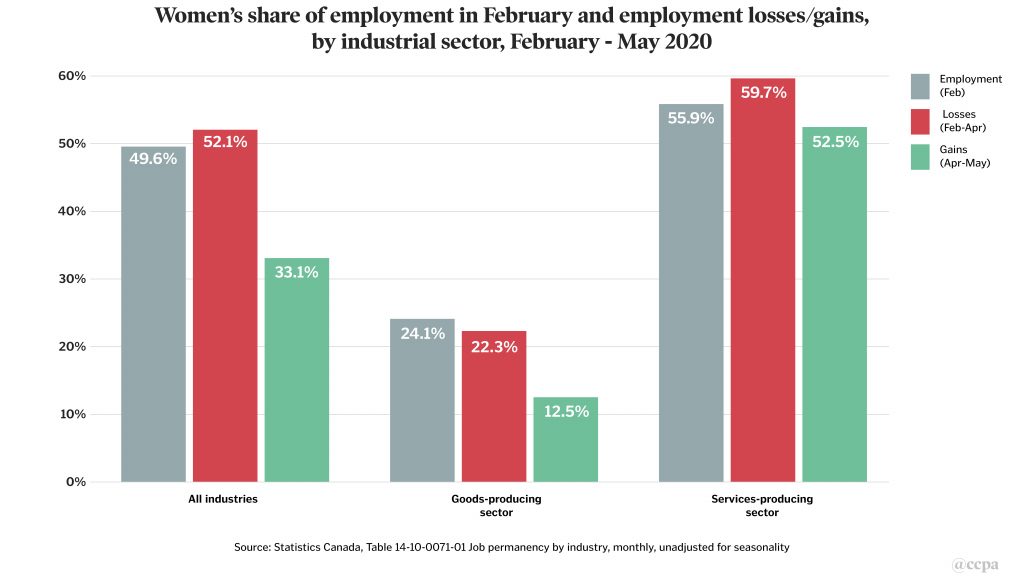 3. There was a boost in low-wage employment in May, again, mostly among male workers (+10.7%) as compared to female workers (+3.6%). Low wage workers are still much more likely to be working for less than half of their usual hours compared to higher income workers (24.3% vs. 9.6%).

On this score, lone parents have experienced greater loss of employment and hours than parents in couple families—all of whom are wondering how they’ll be able to go back to work with the majority of child cares and schools still closed until the Fall. 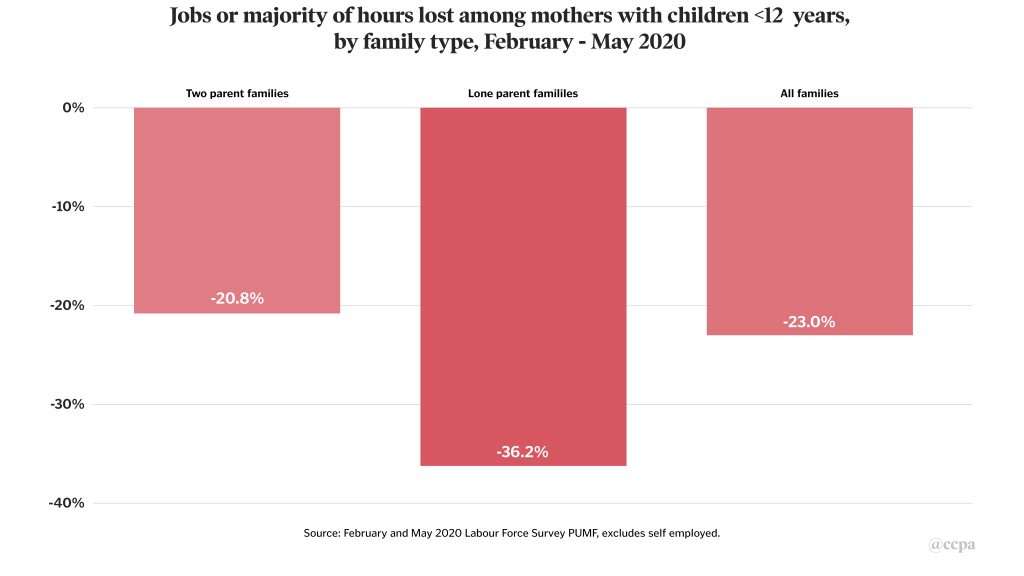 5. The gender employment gap has already begun to widen. With the uptick in male employment in May, it has now fallen by 3.5 percentage points since February to 84.7%. This key metric of gender equality signals significant economic stress ahead without decisive action. 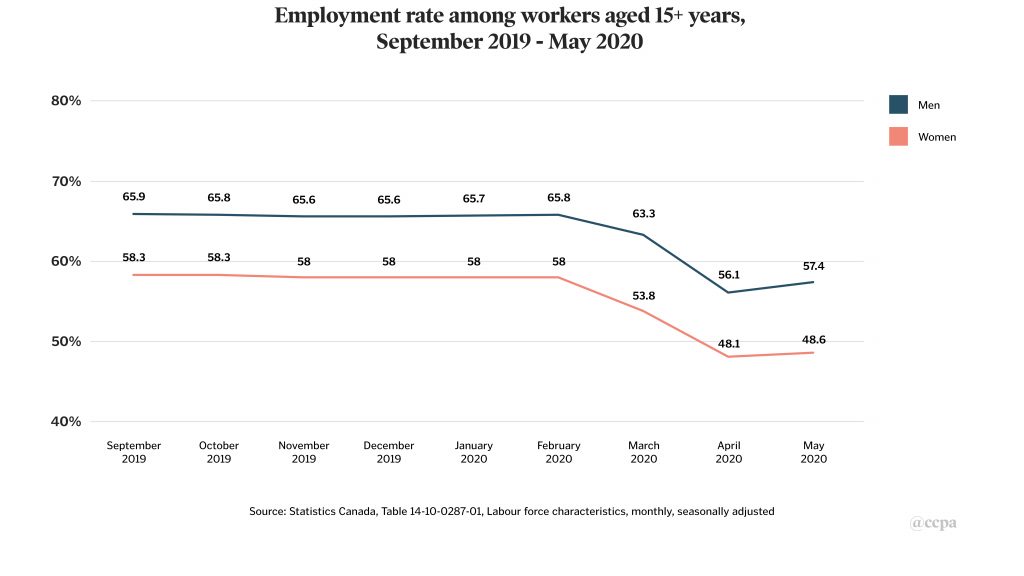 Scaling back paid work will hugely impact women’s economic security. It will also significantly impact household incomes and levels of poverty. We are already seeing a rise in the number of single-earner families and no-earner families. And a 54% rise in the number of single parent families with no employment (+126,000). These families are all on the brink, facing increased debt, and higher levels of stress and related ill health

In past recessions, women flooded into service sector jobs to stabilize family incomes devastated by losses in typically male-dominated goods-producing industries. With the shutdown of broad swaths of the service sector, this strategy isn’t an option this time around.

And without accessible and affordable child care on offer—and other health and housing supports—will women even have the choice?

The pandemic crisis has highlighted the urgent need for structural re-think and systemic change. This is not about getting “back to normal” but about “resetting normal.” Governments need to step up with programs that can meet the immediate needs of millions and lay the foundation for a safer, more resilient and gender-just future for everyone in the weeks, months and years to come.

Child Care To start, there is simply no recovery without childcare. If women end up staying home because of the economics of COVID-19, household incomes will fall, so will household spending, pulling the Canadian economy down with it. Now is the moment to invest in comprehensive, high quality caring services and more robust labour standards (including paid sick leave) across the country.

National child care advocates have called on the federal government to cover 75% of the costs needed to prevent permanent shuttering of licensed/regulated ELCC programs and to ensure services are in place to support Canada’s economic recovery. A COVID response plan must lay the foundation for a comprehensive, publicly managed, high-quality system going forward.

Care Economy Energy and resources must be directed to supporting women’s employment in the service economy—and the care economy in particular. Old style stimulus won’t cut it … Or won’t cut it alone. There is no way back, mathematically speaking, unless we target female-dominated services and use the opportunity to build out much-needed social infrastructure in this country.

Long Term Care is a critical area for reform. This will involve raising the wages of all long-term care workers and those in community-based home care, making permanent the federal top up for essential workers under a new Canada Health Act, offering part-time workers full-time employment at single facilities, and overhauling the standards of care, staffing ratios, and health and safety rights of residents and workers—especially those intersecting forms of discrimination.

Collecting better community-level data as the recovery unfolds is essential to this task. Glaring gaps in information on the impact of the COVID crisis on marginalized communities—racialized people, people with disabilities, Indigenous peoples—will continue to undermine any and all recovery efforts.

Comprehensive income support A recovery plan must also continue to target financial support to those with continuing caring obligations and those facing the permanent loss of employment in sectors like food and accommodation or retail—sectors that employ women in large numbers.

Having experienced the Canada Emergency Response Benefit, it is hard to imagine that the government will move CERB recipients back into the old EI system. The time is right to eliminate the differential eligibility requirements, set a benefit floor, and expand coverage to all workers through increased government funding—effectively establishing a minimum income guarantee for today’s workers.

These are three fundamental planks of a feminist recovery plan that can move us toward a more inclusive and equitable economy that can generate shared wealth and advance equality.