Canada’s Poverty Reduction Strategy, Opportunity for All, was released last week by ESDC Minister Jean-Yves Duclos, setting out the government’s commitment to reduce poverty in Canada.

For years, the anti-poverty community and its allies have worked tirelessly for a meaningful federal plan to eradicate poverty and for the investments needed to make this a reality. With this announcement, the federal government has for the first time set a target for reducing poverty in Canada, defined an official poverty line, and established a framework and a process for reporting publicly on progress. These are important policy wins—but provide little comfort for those struggling with inadequate food, housing, and precarious work.

At the same time, Opportunity for All does not include any new investments in the programs needed to achieve the strategy’s goals. Indeed, Canada’s new plan is more of a framework than a strategy to accelerate poverty reduction. A strategy implies a plan to get from where we are to where we seek to go—and, crucially, the resources to back it up. Without these resources, people living in poverty are still waiting.

What did we get? Poverty is a top of mind issue for Canadians. An Angus Reid Institute survey, released last month, found that 30% of Canadians are pessimistic about their personal financial situation, while 43% believe that their children’s generation will be worse off financially.

Opportunity for All sets two poverty reduction targets to guide future policy and programs, aligning these targets with the UN Sustainable Development Goal to “End poverty in all its forms everywhere.”

The use of the MBM as Canada’s official poverty line is a welcome change—it’s an easily understood measure that is sensitive to different costs of living across Canada—and identification of additional measures can help to capture the different dimensions of poverty, including those experienced by First Nations, Inuit and Métis.

The Strategy also calls for a new National Advisory Council on Poverty to ensure accountability and the prioritization of poverty reduction efforts. The targets, official poverty line and council will be enshrined in a Poverty Reduction Act to be introduced this Fall. This new Act will commit future governments to meeting these goals.

Waiting for action Announcing and embedding poverty reduction targets in legislation is critical to measuring the impact of policy action, but the government’s targets fall considerably short of the mark, lacking the ambition and sense of urgency necessary to meet the vision of a Canada without poverty. Indeed, we are already most of the way to meeting the 2020 target already. 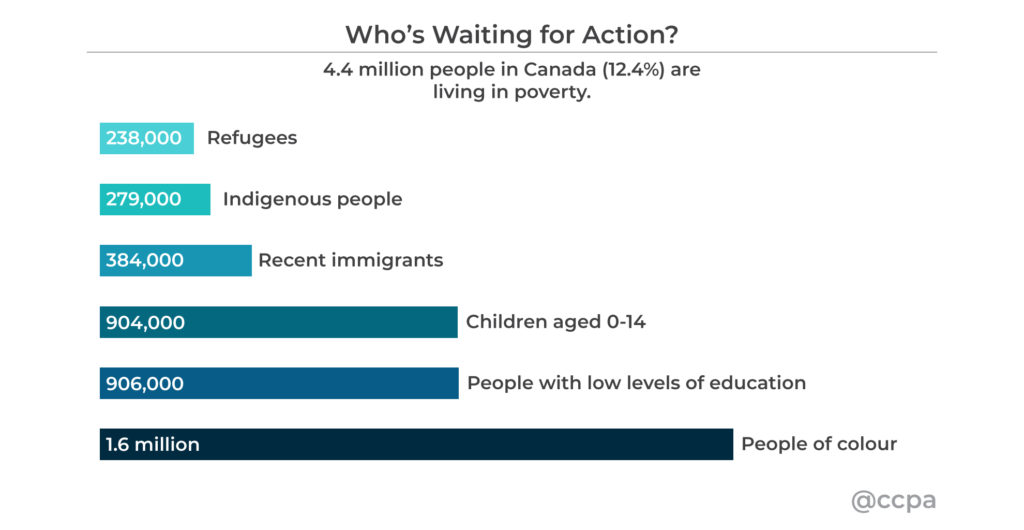 Note: All figures from the 2016 Census, based on Market Basket Measure, Canada’s official poverty line for 2015 income year. Numbers are rounded. These figures are slightly different from those report in the PRS based on the 2015 Canada Income Survey.

The government could have—should have—taken more decisive action. Opportunity for All doesn't provide any new policies or spending, beyond what is already in place (e.g., Canada Child Benefit) or promised (e.g., the new Canada Housing Benefit). With the Strategy’s extended timeframe, another generation of children will grow up in poverty and millions more will continue to struggle.

The federal government is effectively leaving the fate of poverty reduction to future governments—a point Minister Duclos acknowledged at the press conference: "The other measures that future governments will want to take ... I believe will make the achievement of the 2030 objective feasible—still ambitious, but feasible."

There is a clear gap here—between language and delivery. We were hoping for a poverty reduction strategy—but what we got was a poverty measurement strategy.

What do we need? In the end, policymaking, like budgets, is about choices and values. And the choices we make today will determine the long-term sustainability of our society and our economy for generations to come.

As the forthcoming Alternative Federal Budget (AFB) for 2019 demonstrates, better choices are available. With urgent need across Canada, an effective poverty reduction plan requires more ambitious targets and timelines and greater investments in programs such as universal childcare, national pharmacare and training and education.

The AFB introduces a yearly $4-billion transfer to the provinces and territories to boost social assistance benefits and support their efforts to achieve poverty reduction targets. It increases direct transfers to low-income families, including over $4 billion for a new “Dignity Dividend,” to reduce child poverty by a quarter and adult poverty by 10%.

This AFB plan of action aims to lower the poverty rate by 50% from 2015 levels within three years, and end poverty within a decade (2028). That’s what real ambition looks like.

A Canada without poverty: well within our grasp.