According to many mainstream (neoclassical) economists, cutting corporate income tax (CIT) rates is wise public policy. By reducing the cost of capital, more of it will be supplied, and because investment is a key driver of growth, reducing CIT rates leaves firms with more after-tax income to plough into growth-expanding industrial projects. So did the massive reduction in CIT rates in Canada, which began in the late-1980s, spur higher levels of investment and more rapid growth?

The short answer is no: far from improving economic outcomes, there is evidence to suggest that corporate income tax reductions depressed Canadian GDP growth. I present a detailed explanation of why that’s the case in a forthcoming study to be published by the Canadian Centre for Policy Alternatives. Given the election debate around raising the CIT rate, I thought it worthwhile to summarize my findings. 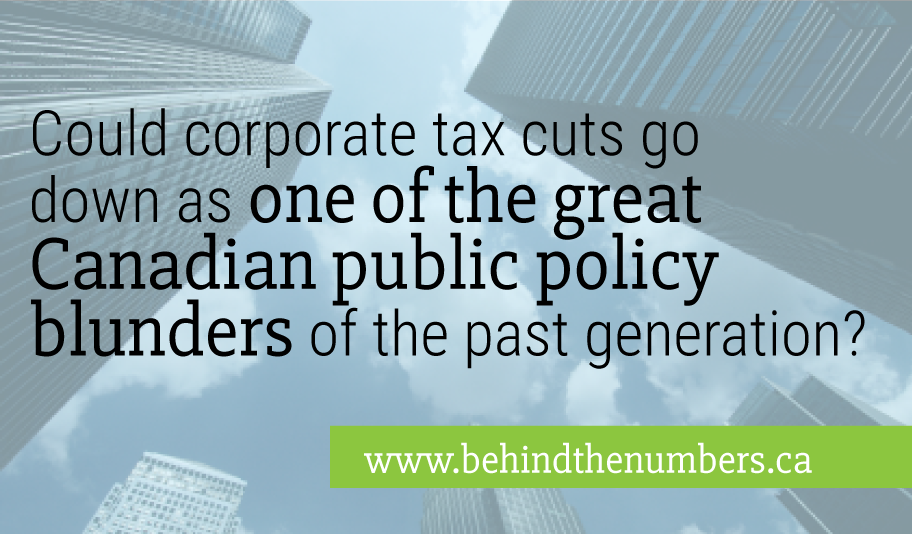 In my study I contrast three Canadian corporate income tax rates—the effective federal CIT rate, the combined Canadian statutory CIT rate, and the weighted average effective rate on the top 60 Canadian-based firms—with five growth variables: investment in fixed assets, employment, GDP per capita, labour compensation and productivity. Based on the findings, I conclude that there is no empirical or statistically significant relationship between CIT regime and growth. Business investment is a key determinant of GDP growth, employment and labour compensation, but over the long-term it is unresponsive to changes in the statutory or effective CIT rate.

The first round of significant corporate income tax reductions (from 36% to 28%) came in 1988, spearheaded by the Progressive Conservative government of Brian Mulroney. The second round was introduced in 2001 by the Liberal government of Jean Chrétien, which lowered the CIT rate to 22.1% by 2004 (where the rate already stood in the manufacturing and resource sectors). The most recent round of corporate income tax reform began in 2008 under the current Harper government. In a five-step reduction program, statutory federal CIT rates fell from 22.1% in 2007 to 15% by 2012.

Over the past three decades the provinces have also reduced rates—from an average of 14% in the late 1990s to 11% more recently. Both CIT rates in Figure 1 have been halved in the past three decades, with the bulk of the reduction coming since 2001. Did these reforms spur higher levels of investment and more rapid GDP growth? 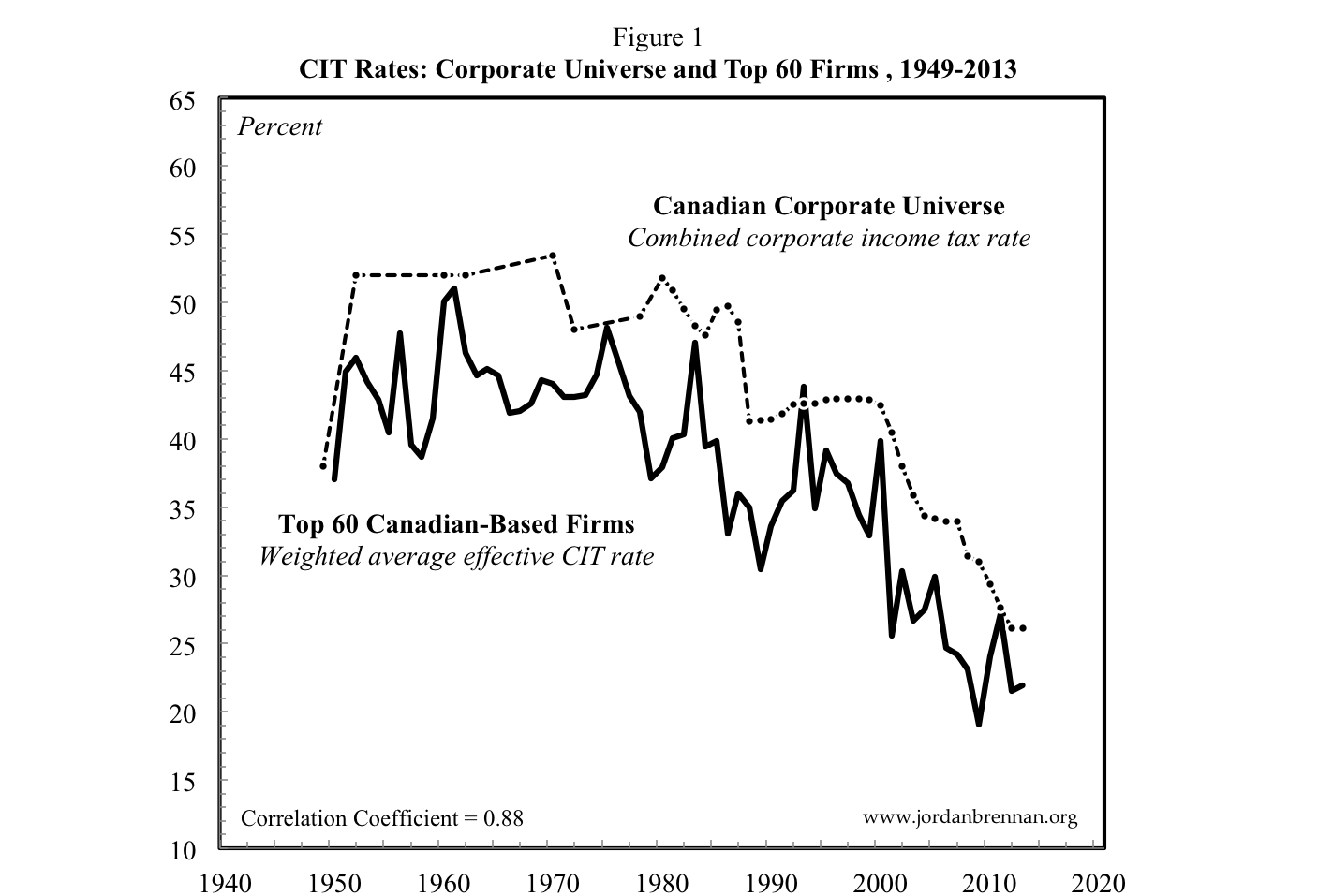 The relative value of fixed asset investment sharply declined in 1929 and did not rebound in a significant way until the end of the Second World War. The first few decades of the postwar era experienced an upward trend in investment. Significantly (and ironically), not only has investment failed to increase in recent decades in tandem with CIT rate reductions, the pattern that investment takes mirrors the CIT rate. Far from the CIT regime and growth being strongly and inversely related, there appears to be a positive association between the two variables, such that CIT rate reductions are historically associated with lower levels of investment.

Fixed asset investment averaged 13.5% of GDP in the postwar decades to 1988. But in the past three decades, while governments were obsessed with corporate tax cuts, business investment averaged just 12.6% of GDP. In sum, when we contrast the experience prior to the CIT rate reduction era (1945–1988) with the CIT rate reduction–obsessed era (1988–2012), we see a move from heightened industrial capacity expansion to capacity stagnation. 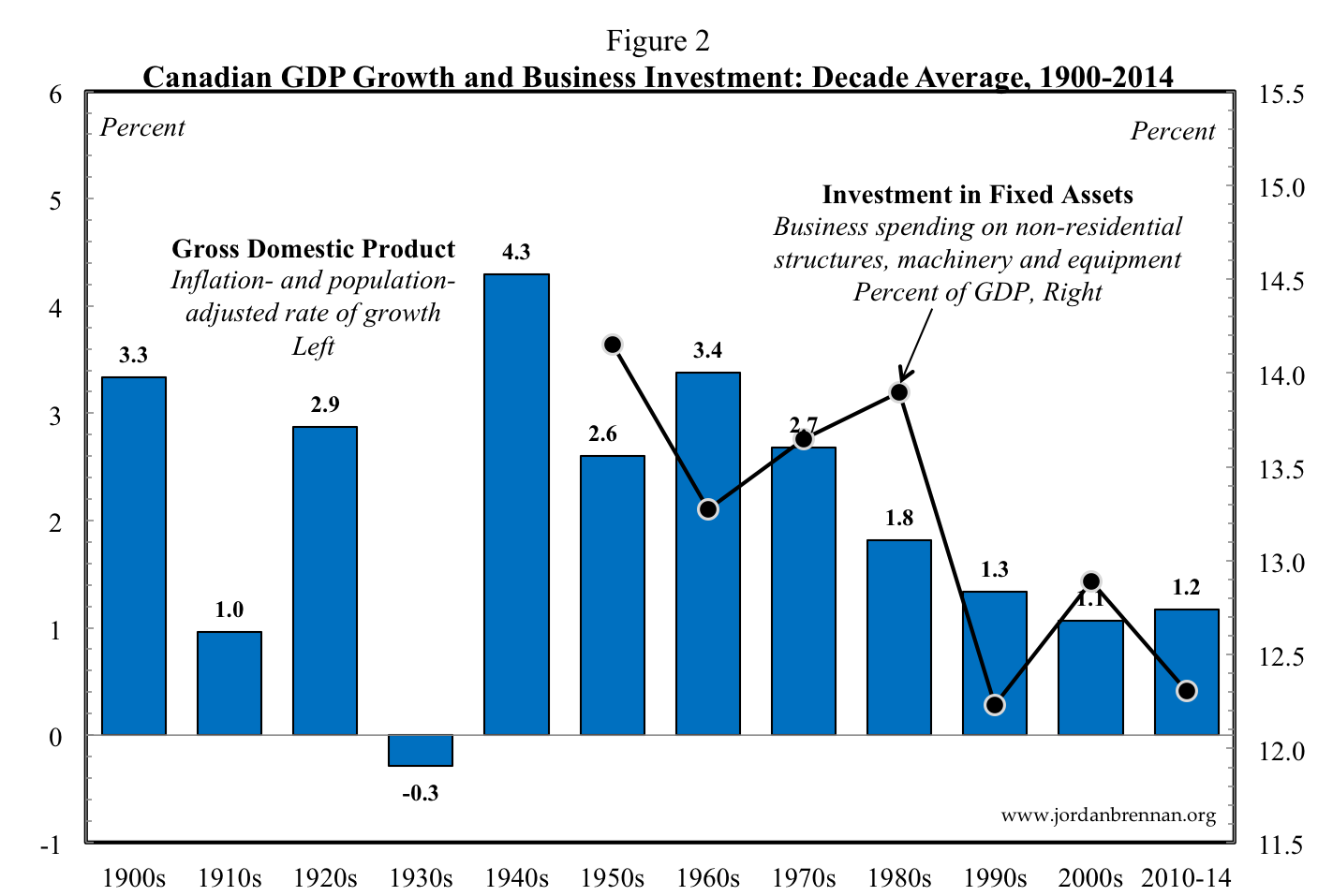 Canadian CIT rate reductions not only failed to lead to faster growth, there is evidence to suggest that CIT rate reductions contributed to slower growth. By reducing CIT rates, Canadian governments contributed to the increased income position of large firms. Instead of investing their enlarged earnings into growth-expanding industrial projects, Canada’s corporate sector—especially its largest firms—have increasingly stockpiled cash on their balance sheet. This “dead money,” as former Bank of Canada governor Mark Carney called it, is one ingredient in the heightened stagnation of recent times.

As the leading firms claim a larger share of national income through enhanced size and market power, their capacity to stockpile cash increases. By hoarding cash these firms stabilize dividend payments, thus reducing risk, and this leaves them with more liquidity for acquisition activities and to hedge against market downturn. One consequence of the stockpiling of cash, then, is that a smaller share of national income is deployed to expand employment and industrial capacity.

As the findings in my forthcoming CCPA paper suggest, corporate tax cuts will go down as one of the great Canadian public policy blunders of the past generation. Far from spawning higher levels of investment and growth, the government fixation with corporate tax cuts has depressed growth, with all the implications that has for jobs in Canada.