On February 27, Jason Kenney’s UCP government will table its second budget. With that in mind, here are 10 things to know about income support for low-income households in Alberta:

1. Low income is associated with lower food expenditures, including fewer purchases of milk, fruits and vegetables. Low income is also associated with poor health outcomes. Canadian households in the lowest income quintile are approximately four times more likely to self-report their overall health as being ‘poor’ or ‘fair’ than individuals in the highest income quintile.

2. According to the Government of Canada’s official measure of poverty, approximately 400,000 Alberta households are poor. The Market Basket Measure (MBM) is the Government of Canada’s official measure of poverty. With the MBM, public officials figure out the cost of a basket of goods and services they feel is sufficient for a standard of living “between the poles of subsistence and social inclusion.” Calculations are then made about how much such a basket costs (the cost of this basket has been estimated for 50 regions across Canada). If you are poor according to the MBM, it’s because experts believe you could not afford that basket of goods in your community.¹

3. Lone-parent families in Alberta experience very high rates of poverty. In fact, according to the MBM (see table above) nearly 62% of Alberta’s female-led lone-parent families with children under the age of five are poor. This figure is rather alarming.

4. The above figures do not include poverty in most First Nations communities in Alberta. Indeed, MBM calculations cannot currently be made on reserve. That’s because, in order for MBM calculations to be made, data on prices and expenditures on necessities is required—data that are not currently available for most reserves. However, it is reasonably safe to suggest that poverty rates on reserves in Alberta are considerably higher than in the rest of the province.³

5. The first large-scale anti-poverty measure of Rachel Notley’s NDP government was the introduction of the Alberta Child Benefit (ACB). Formally announced in the 2015-16 provincial budget,⁴ this initiative was geared towards lower-income parents. Some households were eligible to receive up to $2,750 annually.

7. Child poverty in Alberta dropped sharply between 2015 and 2017. The implementation of the ACB no doubt played a major role here. This drop in child poverty (see below) is especially noteworthy in light of the economic downturn experienced in Alberta at the same time. 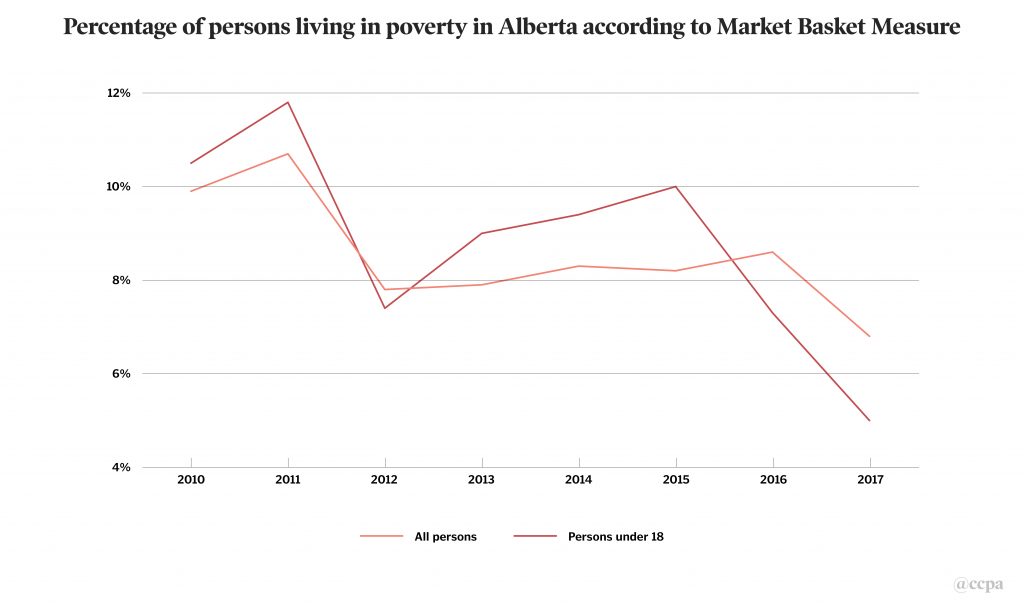 8. Enhancements to federal child benefits also account for much of the reduction in Alberta’s child poverty rate. The recent enhancement of federal child benefits (discussed above) has reduced both poverty and food insecurity among households with children throughout Canada. Indeed, across Canada, the rate of poverty for individuals under 18, as measured by the MBM, fell from 13.3% to 9.0% between 2015 and 2017 (not shown).

9. In November 2018, the NDP government of Rachel Notley government announced major changes to three income assistance programs. Bill 26 resulted in substantial increases in benefit levels for both the Assured Income for the Severely Handicapped (AISH) and Income Support, as well as increases in asset limits for those two programs. All of these changes took effect on 1 January 2019.

Note. This is a modified version of a table created by Lee Stevens in a 22 November 2018 blog post titled “Bill 26: An Act to Combat Poverty and Fight for Albertans with Disabilities.” That blog post is available at the Vibrant Communities Calgary website.

10. Today, benefit levels for Alberta’s income support programs do not vary by community in Alberta, despite large differences in the cost of living. The cost of rental housing varies substantially across Alberta municipalities. For example, average monthly rent for a two-bedroom apartment is $882 in Medicine Hat, but $1,305 in Calgary. Yet, income support programs that are designed and delivered by the Government of Alberta offer identical benefit levels to recipients, no matter the person’s community of residence.

In sum. The upcoming provincial budget gives the Jason Kenney government an opportunity to improve Alberta’s income support framework. Varying benefit levels by community would be an important ‘next step’ that this government could take.

¹ More information on poverty measurement in Canada can be found here. ²  Statistics Canada defines an economic family as “a group of two or more persons who live in the same dwelling and are related to each other by blood, marriage, common-law union, adoption or a foster relationship.” ³ For a recent consideration of child poverty on reserve in Canada, see this report. ⁴ The ACB was actually introduced in the last budget of the Progressive Conservative government of Jim Prentice.  Shortly after that budget was tabled in 2015, the Prentice government was defeated and was therefore not able to pass legislation supporting the measure.