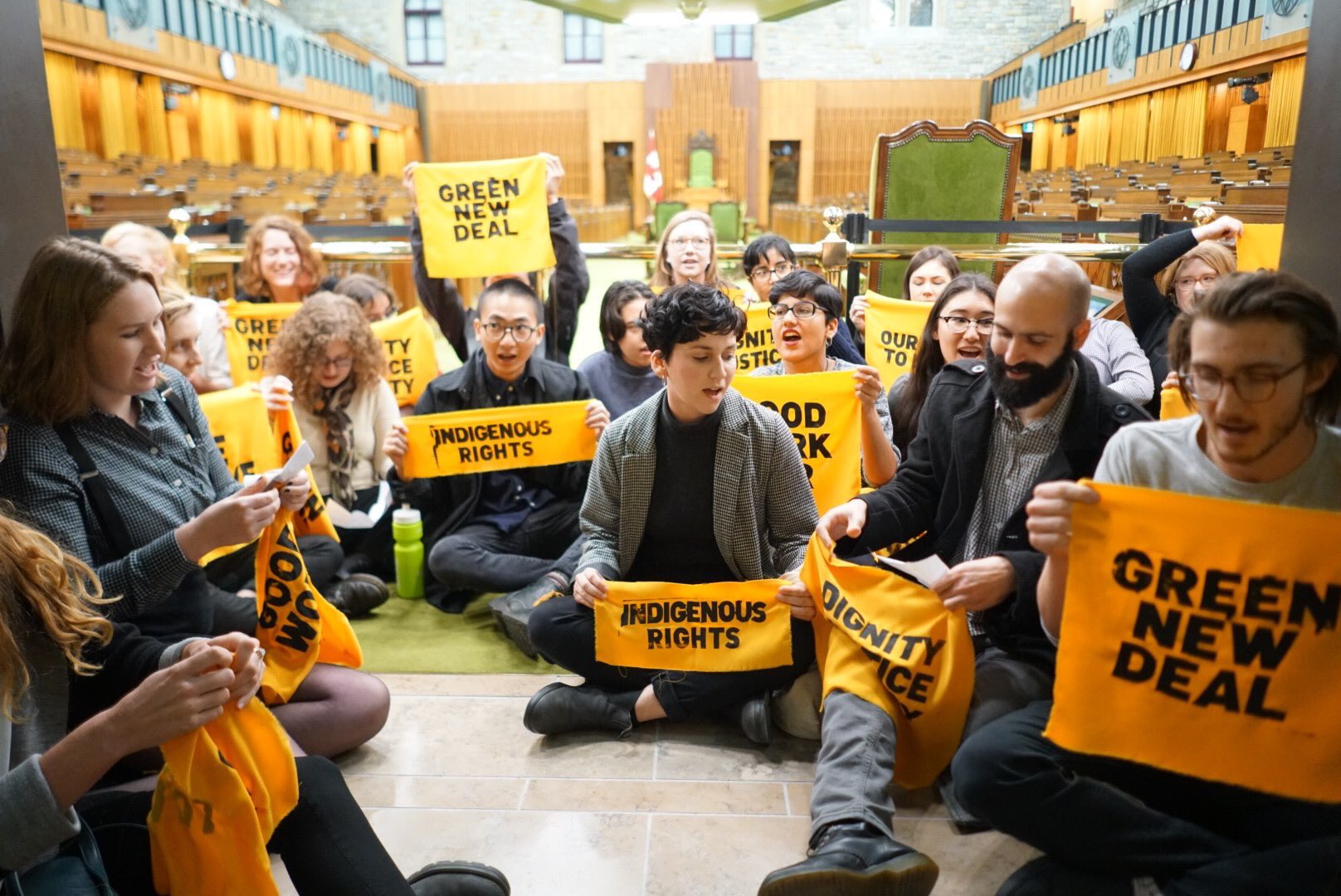 Photo courtesy Our Time to Lead

Climate scientists warn that we only have 10 years to cut global emissions by 45% (below 2010 levels) if we are to meet the internationally agreed target of limiting global warning to 1.5 degrees Celsius. We also must fully decarbonize the global economy (net zero) by 2050. As a wealthy country and one of the world’s biggest per capita GHG emitters, Canada has both the capacity and the obligation to pursue a just transition to a zero-carbon economy, both at home and internationally.

Proposals for a Green New Deal (GND) are attractive because they face head-on the existential challenge to decarbonize our economy. Equally important, they bring opportunities to create a more equitable and just society, ensuring ecological sustainability, greater equality, social inclusion, and meaningful work for all. In fact, the local benefits and community development aspects of the GND are critical to gaining broad public acceptance and support for ambitious green transition policies.

Greatly expanded public services and public investment will necessarily play a key role in realizing the GND vision. All credible programs for a GND, such as those of Bernie Sanders in the United States or the Labour Party in the United Kingdom, feature expanded public services, increased public ownership and revitalized not-for-profit sectors. They also envision a much stronger government role in regulating the economy and providing direction through green industrial strategies.

The negative role of trade treaties

The trade policy dimensions of GND strategies and of decarbonizing the global economy have not been fully explored. Forward-looking trade provisions would support the just transition, not get in the way. But current trade and investment treaties pose serious obstacles to achieving the transformative vision embodied in the GND.

For example, Canada’s first major GND-style policy, Ontario’s 2009 Green Energy Act, was struck down by a World Trade Organization dispute settlement panel after challenges from the European Union and Japan. Germany, the Netherlands and Alberta have been threatened by investor-state dispute settlement (ISDS) cases over the phasing out of coal-fired plants. India and the U.S. are locked in a cycle of WTO suits and countersuits over government incentives to boost local content and employment in the renewable energy sector.

In the face of a climate emergency, such litigation and the chilling effect it exerts on climate action are absurd. Fortunately, the most straightforward way to navigate multiple trade treaty constraints and to reduce the risk of trade treaty challenges to implementing a GND is by relying heavily (as the most progressive GND plans already do) on public investment, public services and proactive public purchasing. However, even this publicly directed road has a few bumps.

For Canada, three of the biggest trade treaty obstacles to having public services and purchasing play a pivotal role in a successful domestic GND strategy are 1) investment treaties that include ISDS, 2) the procurement provisions in the Canada-EU Comprehensive Economic and Trade Agreement (CETA), which cover purchasing by provincial crown corporations, local governments and the broader public sector, and 3) the so-called market access provisions in the General Agreement on Trade in Services (GATS) and multiple Canadian free trade agreements (FTAs).

Canada's record under NAFTA's investor-state dispute settlement process is all the proof we should need that ISDS fundamentally clashes with plans for rapidly decarbonizing the economy. But globally firms are using ISDS (or threatening to) to sue countries for strengthening environmental measures that happen to affect investors' business interests.

The first step to resolving this problem is therefore to put an immediate moratorium on negotiating and implementing new investment agreements. Longer term, we should renegotiate or terminate existing treaties to remove ISDS and reform the substantive investment protection provisions. We need to extricate ourselves from ISDS as soon as possible.

The removal of ISDS in the new NAFTA would be a positive step. But even though Chrystia Freeland, as foreign affairs minister, has portrayed ISDS as “elevating the rights of corporations over citizens,” Canada continues to pursue ISDS in free trade deals with the Global South, for example with Mercosur and in the "Comprehensive and Progressive" Agreement for Trans-Pacific Partnership (CPTPP).

Our government must stop supporting Canadian firms that have been using ISDS against the environmental policies of other countries. Disgracefully, three separate Canadian mining firms are attacking Colombian laws prohibiting mining in the sensitive high-altitude ecosystems that provide 70% of the country’s drinking water.

Proponents of activist public purchasing policies must hope that local governments, Crown corporations and other publicly funded entities will be able to find creative ways to skirt CETA’s unreasonable ban on considering local development benefits in procurement decisions—or find the courage to ignore it.

One policy option, which would not involve a frontal attack on CETA, would be to adopt “Buy Sustainable” procurement policies. These wouldn’t need to include any nationality-based discrimination, but should put social and environmental conditions on public purchasing designed to maximize community benefits, local hiring, minimum wages, decent working conditions, unionization, and worker and community control.

In addition, sustainable procurement policies would support energy efficiency, conservation and high standards to limit GHGs in the production and use of products, retrofit homes and buildings, reduce transport costs and more. These programs must be accompanied by substantial investment in skills training and programs to ensure that Canadian firms and workers can meet these high standards and transform their production processes to eliminate carbon emissions.

The market access provisions found in GATS and several other treaties (including CETA and the CUSMA, or "New NAFTA") prohibit public monopolies in sectors that governments agree to cover. Once a service sector is fully committed, it is meant to remain permanently open to foreign competition. A few key public service sectors such as health, public education and social services are protected through strong exceptions, but many others are not.

Taken literally, Canada’s market access commitments prevent all levels of government from creating new public monopolies, even on a regional or local basis, in many sectors that will be critical to achieving the green transition. These include public transit, wastewater services, waste management services, and private health or automobile insurance. In all these sectors, public policy measures cannot be made more trade restrictive in the future (the so-called standstill), and once a measure is amended or eliminated the trade treaty protection disappears and can’t be restored by future governments (the ratchet effect).

CETA’s services and investment provisions, in particular, make it difficult for future governments to restore or expand universal public services without risking a trade treaty challenge. These are an unacceptable infringement on democratic choice that progressive governments should simply disregard. The strenuous official assurances made regarding the sanctity of public services (in the CETA interpretive instrument, for example) must now be taken at face value, even if they are not fully reflected in the treaty text.

Thinking longer term, this failing can be remedied by including an effective, unequivocal exclusion for public services in all new and existing trade and investment agreements. Such a carve-out should ensure that all levels of government can create new public services, expand existing ones and reverse privatization without incurring compensation claims or facing sanctions under trade and investment treaties.

Canada’s contribution to meeting global targets cannot be met through domestic measures and GHG reductions alone. For Canada to do its fair share, it must act globally, including assisting developing countries in their green transition.

This will mean a substantial increase in foreign aid. This aid should be “untied,” meaning that it should only apply criteria such as effectiveness in reducing carbon and other pollution, encouraging community benefits in the receiving country and respecting human rights, rather than being directly tied to commercial benefits for Canadian firms. It should be channelled through direct investments in high-impact and equitable GHG reduction initiatives, not carbon offsets or carbon trading schemes.

All trade agreements should include binding, enforceable obligations to combat climate change (e.g., meeting a country’s Paris Agreement obligations) and to safeguard greenhouse gas reduction initiatives from trade challenges. Trade benefits should be suspended when any country shuns its commitments or blatantly disregards its obligation to reduce GHG emissions. An obvious example is Jair Bolsonaro’s Brazil, with which Canada is currently negotiating a free trade agreement despite the burning and destruction of the Amazon rain forest.

We also need a “peace clause” to halt brewing trade wars where countries are challenging each other over public policies to promote green energy or other climate-friendly initiatives. The goal should be to negotiate a global moratorium on climate-related trade disputes. Canada could act immediately and unilaterally by vowing not to initiate any environment-related disputes and withdrawing support for trade or investment challenges initiated by Canadian firms against other countries.

In closing, the Green New Deal must be different from traditional stimulus programs. It is not simply Green Keynesianism. The goal of the GND is not to revive the “animal spirits” of entrepreneurs or simply to restore the health of the market economy. Instead, the aim is a permanent transition to a new form of production and commerce that is ecologically sustainable and less materially intensive.

Again, public services are pivotal. George Monbiot has talked about aiming for “private sufficiency and public luxury.” In this vision of a sustainable future, the ability of individuals and families to accumulate large quantities of private wealth will be curbed. But working hours will be reduced, leaving more time and energy for leisure.

As Naomi Klein and others have stressed, we need credible, inspirational transition stories. Public services and the public and not-for-profit sectors will play a leading role in any such narratives. We must sidestep, ignore or replace trade rules that impede realizing this vision.

Scott Sinclair directs the Trade and Investment Research Project within the Canadian Centre for Policy Alternatives. He is the co-editor, with Manuel Pérez-Rocha and Ethan Earle, of Beyond NAFTA 2.0: Toward a Progressive Trade Agenda for People and Planet (2019). This post is adapted from Scott's presentation to a November 19 conference in Brussels on public services and "next generation" free trade deals, which was organized by the European Public Service Union, AK Europa, the Austrian Trade Union Federation and the European Trade Union Confederation.