Today the Ontario government will table its second provincial budget since Premier Kathleen Wynne secured a majority mandate in June 2014.

In these uncertain times, no government budget is easy to craft. There are always trade-offs. But this year, the big question will be: just how much is this government willing to trade off to reach its goal of eliminating its deficit by 2017-18?

There has been pressure from the usual suspects to make deficit elimination the top priority for Ontario. But several other factors need to be taken into consideration.

For starters, Ontario has a yawning infrastructure deficit that is starting to be addressed by this government and that takes sustained investment. It needs to continue on that path.

Secondly, in this slow growth environment, combined with precarious work and labour market uncertainty, the need to protect public services that benefit everyone should be top of mind. This calls for an expansion, rather than further constraints on government investment and services.

Thirdly, there is growing consensus that the more effective way to reduce the debt-to-GDP ratio is by focusing on growing the economy and the GDP rather than a singular focus on reducing government expenditures.

Finally, the province continues to have a revenue problem and that needs to be addressed.

Will the province's approach to its 2016 budget be balanced — preserving and improving public services while tweaking revenue sources in a progressive, fair manner?

The CCPA-Ontario team will be in the budget lock up and we'll emerge after 4 pm with rapid analysis to help make sense of the numbers.

Here are three charts we'll be watching to see if they change:

Will spending be enough to support and improve services? 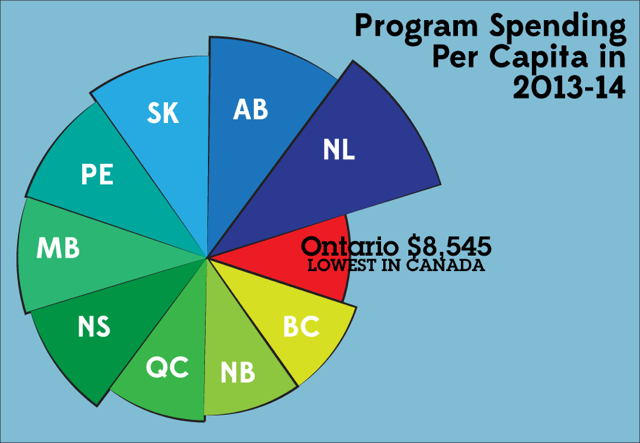 This chart, sourced from the 2015 Ontario budget (chart 2.1), showed that in 2013-14 Ontario had the lowest per capita program spending in all of Canada. How much lower can you go without compromising public services that everyone relies upon, such as public health care and education? We'll be watching to see if Ontario plans to aim higher in this budget.

How much is the deficit wagging the dog? 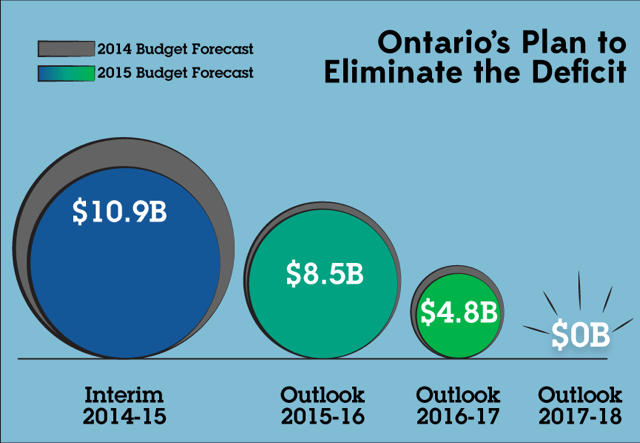 This chart, sourced from last year's budget (chart 2.4), shows the government's planned trajectory to get to zero deficit in 2017. Laudable, but what is the rush if it comes at the expense of preserving and improving public services? Better to delay the zero deficit goal by one or two years. Federally, they see the light on this subject. Will Ontario? 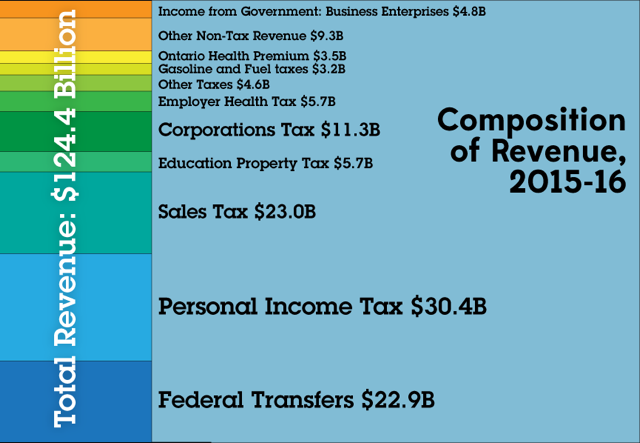 This chart, sourced from last year's budget (chart 2.23), breaks down the source of revenue the government relies upon. The province has more tax room that it could take up from corporate income taxes, the HST, and gas & fuel taxes. Pre-budget announcements indicate the government is ready to implement a cap and trade system that could yield an estimated $1.3 billion in new revenue in 2017-18. Will the province look at tweaking other revenue sources to improve its bottom line?

To see how it all works out, follow Sheila Block on Twitter: @Sheila_M_Block; our CCPA-Ontario account: @CCPA_Ont; and me @trishhennessy. We'll be posting before 4:30 pm, as soon as we emerge from budget lockup.

Trish Hennessy is director of the Canadian Centre for Policy Alternatives' Ontario office.