Why gender equality will make you rich and popular 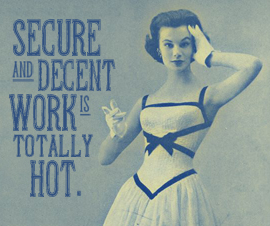 1. Get to work: If you look at all the hours of paid work that folks performed last year, you will see that men performed more hours of paid work than women did. Women are more likely to work part-time than are men: 27% of working women work part-time, compared to 12% of working men. And that’s the way it’s been for 30 years. Now, not everyone wants or needs to work, or to work full time. But plenty of folks do need to work. And the gap between women's and men's hours of paid work is not merely the result of choice. It is the result of specific barriers that are stopping women from being able to get the paid work they need. For example, since women perform twice as many hours of unpaid work as do men, they have less time to seek paid work and sustain full-time work. When we remove the barriers that stop women who want or need to work from having access to that work, everyone benefits. A recent analysis of developed countries, estimates that closing the gap between male and female employment rates would boost GDP by at least 9%. That is economic growth that benefits both men and women.

2. Close the gap. The principle of fairness is something I think we can all get behind. If two people with the same level of training and skill put in the same effort, for work of the same value, then they should get paid the same amount. Shouldn’t they? So why is it, that in a country that values fairness, we still have the fifth largest pay gap among 28 similarly developed countries? In Canada, women with full-time jobs earn 23% less than men. It is even worse if you are a single mother, a First Nations woman, or a woman with disabilities. For example, the average income for women with disabilities in Canada is 33% lower than the income of men with disabilities and their income is 57% lower than men in Canada overall. Not only is this unfair, but it represent a huge loss in potential revenue for individuals and communities. Even the most conservative estimates, from our sisters at the World Bank, conclude that closing the gender wage gap could increase Canada’s GDP by as much as 10%.  And that would be a win for everyone.

3. Invest in childcare. This is going to make you richer and get you that quality time with your partner you’ve been looking for. Two-thirds of parents with children under the age of six work. For some parents this might be a choice, but for the majority it is an economic necessity.  Whether by choice or necessity, parents are going to work and their children need and deserve safe, quality care. Not to mention the learning and socialization benefits of early childhood education for children. Yet, Canada has the lowest childcare access rates in the industrialized world; Canada‘s public spending on early-childhood education and care programs is only 0.25% of GDP–one third of the OECD average of 0.7%. Less than 20% of the existing childcare spaces available are regulated spaces. What would happen if the federal government invested in an affordable, safe and high-quality child-care program? According to the radical feminists at TD Economics investing in child care and early childhood education “fosters greater labor force participation”; it increases job opportunities; and it “reduces duration of unemployment if it occurs.” As if that isn’t enough, TD Economics goes on to conclude that investing in child care “can also reduce poverty and help to address income inequality.” That means that working men and women with children have a safe place for their children.  Parents who need to work or want to work will have more time to find work and to keep work, which means more economic security all around. The economy grows and with the right social and economic policies in place, everyone (with children or without) can share in the benefits of that growth. Oh, and at the end of the day, everyone is a whole lot less cranky and tired and that makes quality time a whole lot more quality.

4. Share better. OK guys, I’m not going to kid you on this one, if you live with a woman, you are going to have to do more unpaid work. Right now, you are doing one-third of all unpaid work (you know, groceries, dishes, diaper changes) and women, you are doing two thirds of that work. Now, there hasn't been enough research to let us know what happens in same-sex households, but a recent study by researchers at UCLA found that straight couples who have a clear and equal division of household labor are happier. Apparently, “sharing household chores was in the top three highest-ranking issues associated with a successful marriage—third only to faithfulness and good sex.” Let me say that again, third only to good sex. The study found that couples that shared household tasks equally had a higher level of “relationship satisfaction and sense of well-being.” Are you hearing me on this one?

Sound like pie in the sky? Not a bit. And if you don’t believe me, check out the 2013 Alternative Federal Budget for the fine print and the math. This item is on the menu and we can afford it. Now it’s up to us to ask for it.