Trudeau and Macron, the radical centrists 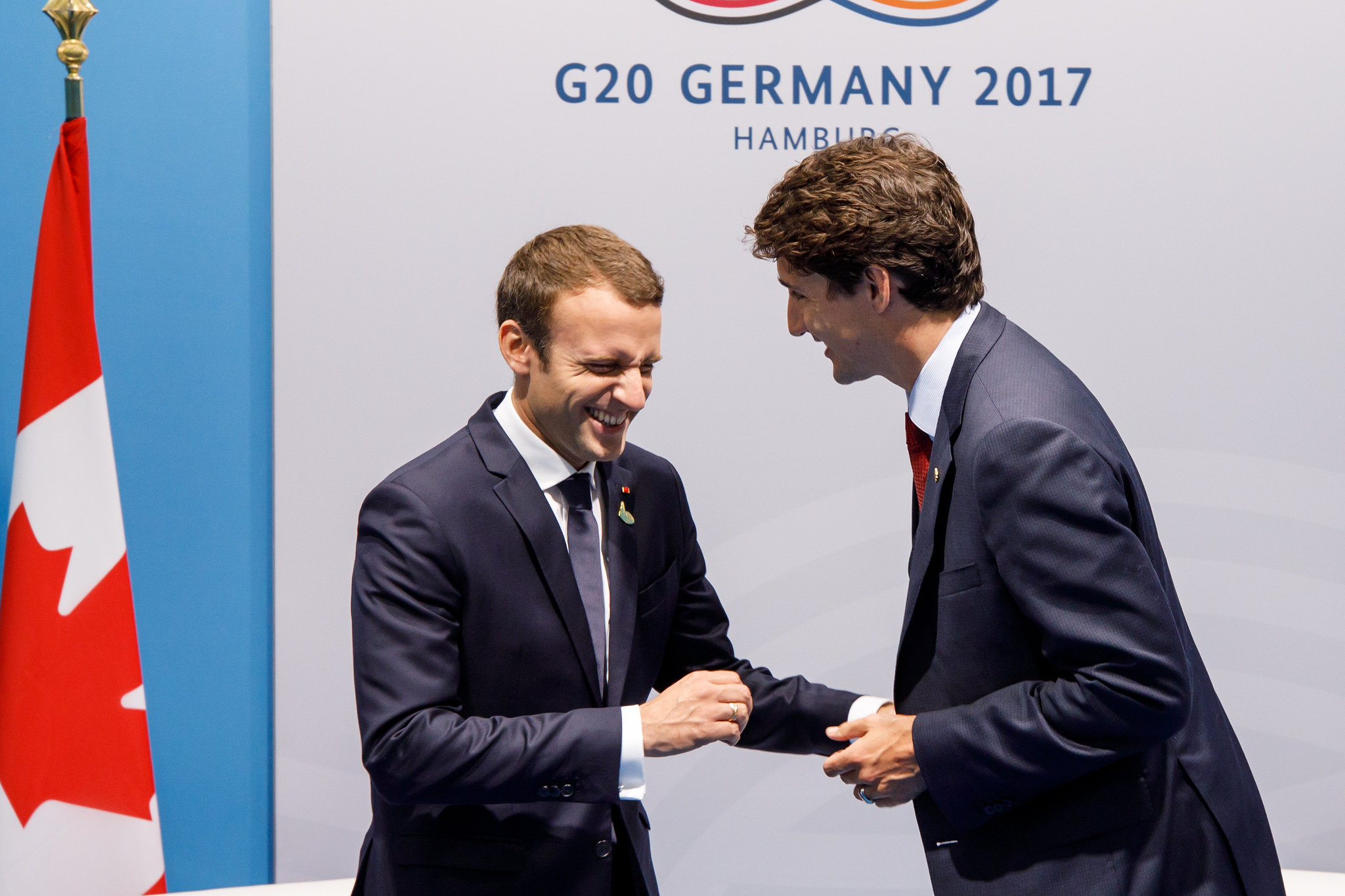 Macron and Trudeau at the G20 summit in Hamburg © PMTrudeau Flickr photostream.

Can one be passionately centrist in this day and age? French President Emanuel Macron has staked his relatively short political career on it, with considerable success. Though the mood in Paris after recent legislative elections may be more one of relief than jubilance—57% of voters stayed home, high even by French standards—the new government’s mandate is about as firm as a politician could hope for in any 21st century western democracy.

Across the pond, Canada’s Prime Minister Justin Trudeau enjoys similar approval ratings, and as large a majority in Parliament, allowing him to pursue his own brand of radical centrism with few obstacles. Actually, Trudeau and Macron have a lot in common, politically, ideologically and in the rhetoric they use. It was not surprising how they gravitated to each other at the G7 in May, forming what Rolling Stone magazine called a new “international bromance.”

Both leaders speak gravely and frequently about the threats to liberal democracy—from inequality, climate change and rising populism—but optimistically about their chances to meet those threats using the traditional tools of the capitalist welfare state: free trade, government stimulus and moderate redistribution. Both are also avowed internationalists, feminists and snappy dressers who love to listen—be it to factory workers in Amiens or the world’s largest asset managers at BlackRock. Consultation, for radical centrists, is key.

At the same time, there are important differences in Trudeau’s and Macron’s electoral victories and the political situations that made them possible.

Despite coming out of Hollande’s Socialist cabinet, Macron is essentially an outsider, neither left nor right, but picking from both camps to create the impression of a party that is willing to break out of old ways of thinking. The Liberals, on the other hand, have been Canada’s so-called natural governing party for 150 years now. When Canadians want a change they vote Conservative. When Liberals want to win an election they run from the left. Trudeau was special, perhaps, only in how convincingly he embraced the mantra of progressive change in the 2015 election.

Economic realities are also quite different for Macron and Trudeau. The French president takes office as unemployment trends downward, international investors buoy markets and job growth is back up to levels not seen in a decade. Macron’s challenge (according to the country’s banking and industrial sectors) is to maintain that momentum, which the president hopes to do, in part by laying off state employees and chipping away at allegedly unproductive labour privileges. This also happens to be what Germany wants him to do in the name of better EU integration.

Trudeau, on the other hand, inherited a sluggish post-crisis economy still yearning for higher commodity prices. Something different had to be done. True to their electoral promises, the Liberals passed one of the most enlightened federal budgets in recent memory. Their plan acknowledged the capacity of deficit spending to create good jobs and sustainable growth. Child care support got a boost, as did funding for housing and education for First Nations.

But plus ça change, as they say. Trudeau’s infrastructure spending, worth $180 billion over 10 years, will be guided by a public-private bank funded largely by private pension funds and other large institutional investors (Macron’s former colleagues) whose primary goal is profit. And despite both leaders’ disappointment with Trump for pulling out of the Paris Agreement, neither batted an eye before agreeing to boost military spending exactly as the U.S. president insisted at this year’s NATO summit.

What does it say about our times, and our challenge on the left, that these two defenders of the status quo can seem so radical? It could mean the stakes are very high indeed; that, as Macron told the Guardian (U.K.) newspaper recently, “people saw they were at the edge of a precipice and they reacted.”

More optimistically, the popularity of the Macrons and Trudeaus of the world could be a sign that voters are ready for more urgent measures to address the existential challenges of economic inequality and climate change. If the programs of the radical centrists disappoint, or worse, these men reveal themselves as just the charming agents of deeply distrusted elites, then the reaction could be swift.

Stuart Trew is Editor of the Monitor, the CCPA's bimonthly magazine of new research and analysis. This article appears in the Summer 2017 issue of The Progressive Post.