This morning the federal government announced a “Small Business Job Credit”. The idea is that small businesses with a payroll of under about $550,000 a year will have a portion of what they paid in EI refunded to them. Only the employers get some of their money back, not any of the workers. Also, this is at a time when EI is so restricted that 6 out of 10 unemployed Canadians can’t even get it.

This is going to cost half a billion dollars a year, but will only amount to a maximum of $2,200 per business. Even with this miniscule amount, Minister Oliver is flogging this as a job creation strategy. Well if $2,200 is going to incent behaviour that can go either way and you don’t even have to hire anyone- you can get it by doing nothing.

Say you’re a business just over the $550,000 payroll cap. Why not just fire your summer student or cut back her hours to get yourself under the cap? Your reward for firing a student...a tax break! What if you pay minimum wage and don’t want to invest in training? Your reward for sitting back and doing nothing...a tax break! Now what if you want to expand your business but you’re close to the payroll cap? You may well think twice before hiring that person and losing your tax break. 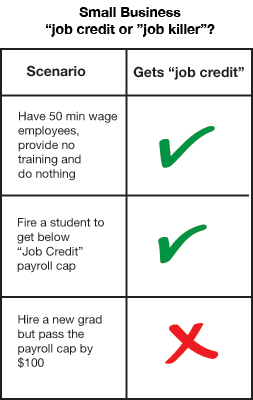 Don’t think small businesses will restrict their business to keep under an artificial cap? Take a look at how they bunch up right before they’d lose the “small business” tax break. I bet we'll see the exact same thing happen with the Job Credit payroll cap.

David Macdonald is a Senior Economist with the CCPA National Office.