Envisioning a progressive trade agenda for the 21st century 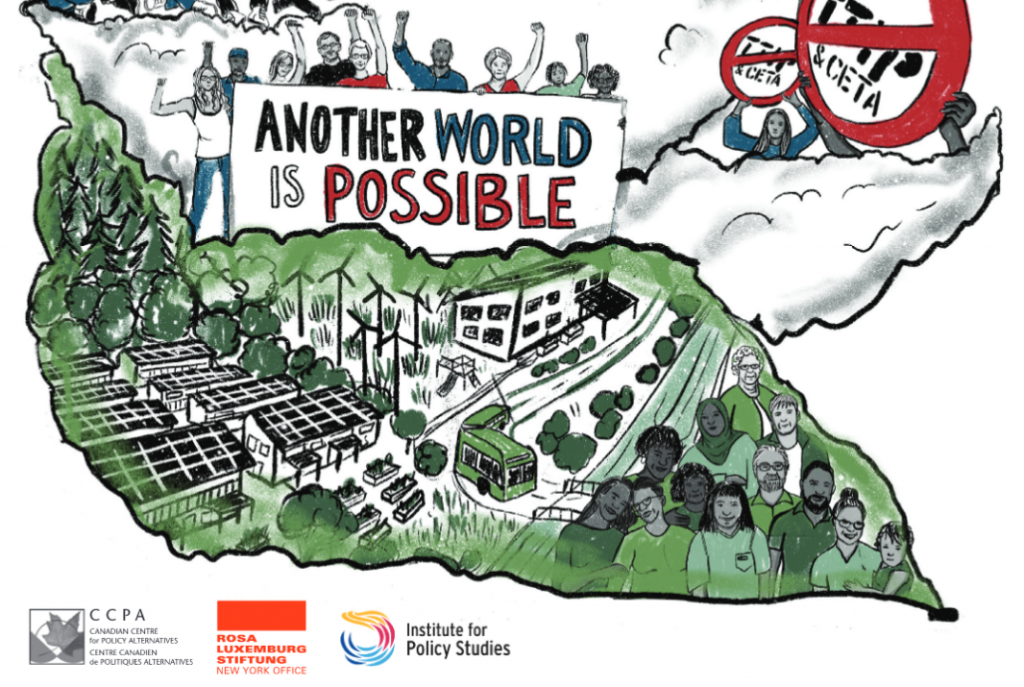 The extraordinary surge in popular support for expanding public health care, a “Green New Deal” and other progressive policies demonstrates a powerful public appetite for meaningful social change. Decades of neoliberal austerity and “the market made me do it” politics, which boosted inequality in most countries, have also created pent-up demand to change the rules of globalization and international trade.

Our new report, Beyond NAFTA 2.0: A Progressive Trade Agenda for People and Planet, addresses a key question: what kind of trade, and what kind of trade agreements, might complement growing demand for better social programs, more ecologically sustainable production, and more egalitarian ways of living? What kind of trade regime, in other words, should progressives support?

The extraordinary expansion of international trade and globalized supply chains over the past several decades clearly exceeds the planet’s ecological limits. Rapid climate change is simply the most alarming symptom of multifaceted environmental destruction and unsustainable resource exploitation—of fossil fuels, forests, farmlands, and fresh water—that are at the heart of this system. At the same time, the economic gains from growth in trade have been overwhelmingly captured by a tiny elite.

To now, free trade agreements have been employed by governments and corporate lobbyists, in the interests of this elite, to lock in those harmful (but profitable) ways of producing and exchanging goods and services. For those pursuing social change, it is imperative that we rethink free trade ideology and the prevailing template for the agreements that govern globalization.

Progressives can and do seek to preserve the benefits of trade, but at the same time to embed trade agreements in a new legal ecosystem of rights and obligations that looks first to the rights and health of citizens, workers, communities, and the planet. In other words, progressives insist on trade rules that give priority to human rights and the rights of nature over corporate rights.

A reformed international trading system must be inclusive, and tolerant of different ideas about how our economies and societies are organized. Through special and differential treatment, trade rules must accommodate the development aspirations of the Global South. A progressive trade model would also redress the long-ignored rights of excluded and disadvantaged groups everywhere to productively participate in the global economy. The harmful secrecy surrounding trade and investment treaty negotiations must be replaced by an open and transparent treaty-making process that no longer gives the upper hand to corporate lobbyists and other insiders.

Another overarching theme in our report is the demand for a new trade treaty framework that supports core progressive policy priorities such as universal health care, strong public services; robust environmental protection and resolute action on climate change; full employment in meaningful work that provides a good standard of living; strengthened labor standards and trade union rights; the primacy of universal human rights, especially the rights of women, Indigenous Peoples, and all those seeking equity; and the greater democratization of economic decision-making.

For too long, trade treaties have been instruments of policy suffocation, key tools for enforcing a neoliberal policy monoculture. This must end. The existential threat of climate change and the corrosive effects of inequality have exposed current trade treaties as counterproductive and dangerously out of sync with today’s challenges and priorities. It is critical to reverse the prolonged “mission creep” through which trade agreements have strayed far from basic trade matters, such as tariff reduction, to instead become instruments of corporate control and privilege in all areas of governance.

Despite Trump’s populist and anti-establishment rhetoric, his unilateralism is clearly aimed not at undoing but at deepening the pro-corporate biases of the current trade regime. The evolution of NAFTA into the USMCA is proof of that. The approach advocated in our report could not be more different.

Through close analysis of the USMCA (CUSMA in Canada and T-MEC in Mexico), trade experts and activists explore how that agreement and the current neoliberal trade regime set back progressive aspirations across the policy spectrum. This analysis is guided by four basic principles: recognizing the primacy of human rights over corporate rights; respecting the policy space of democratic governments to ensure trade contributes to national and local economic development; safeguarding public interest regulation; and adopting a climate-friendly approach to trade.

This positive, progressive trade agenda proposes the following actions (among others):

A final theme of our report is that while the existing trade and investment regime needs to be transformed, policy alternatives can and must be pursued immediately. Given the destructiveness of runaway climate change and rising inequality, we cannot afford to wait until the current international trade system is reformed before acting. Recognizing the obstacles that current trade and investment rules pose to a just economic and ecological transformation should never imply giving in to their chilling effect.

Our working paper is meant to be a roadmap, not a blueprint. We hope it will be a living document, subject to discussion, criticism, and revision, and a tool for stimulating deeper debate and discussion about trade alternatives in civil society, trade unions and social movements.

Beyond NAFTA 2.0: A Progressive Trade Agenda for People and Planet (Ethan Earle, Manuel Pérez-Rocha and Scott Sinclair eds.) is jointly published in English and Spanish by the Canadian Centre for Policy Alternatives, the Washington, D.C.–based Institute for Policy Studies and the Rosa Luxemburg Foundation’s New York office. It can be downloaded here.